A star projector is an amazing way to create a magical atmosphere in a room.

These simple, affordable machines have the power to transform your bedroom or living room into a celestial paradise.

Disclaimer: Price This Please is reader-supported. When you buy through links on our site, we may earn an affiliate commission at no additional cost to you. 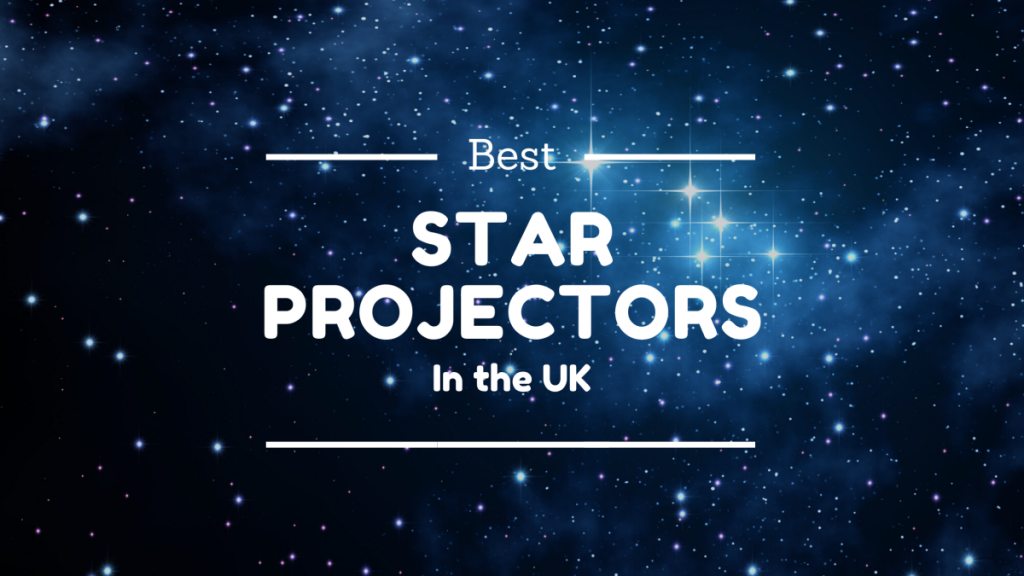 The top-selling BlissLights Sky Light LED Star Projector is very well reviewed for its clear, HD projection that makes use of a glass lens and holographic technology.

The resulting star projection is bright and dynamic. The stars themselves are green whereas the nebula cloud is blue, creating a striking contrast as the whole image moves dynamically across the room. There is actually a second version where both the stars and nebula are blue.

This is a simple, easy-to-use star projector with 3-button control. There’s an on/off switch, a brightness switch and a play/pause switch for running the projection cycle. It will auto-power-off after 4 hours of use.

The star projection itself is superbly bright with high-definition nebulae and ample stars. It should easily cover a whole room with a rich and detailed moving projection that includes both stars and nebulae, unlike some other models.

Both the green and blue versions look great, with users remarking that the blue version is more natural whereas the green version looks potentially more striking with higher contrast.

Unfortunately, there is no remote with the BlissLights Sky Lite – LED Star Projector, but it is amongst the cheaper options and with its detailed projection, it has to rank highly amongst other star projectors.

If you’re looking for a good video review, we highly recommend this review by Britny Elen below.

Whilst not a conventional stars projector, the CDUTA Projector Night Light with Timer emits a more colourful and stylised projection of stars and moons.

It’s not a realistic star projector, so doesn’t emit a nebula with stars overlay, but instead emits a colourful and striking constellation of star and moon shapes.

The CDUTA Projector Night Light with Timer has 3 different power modes; USB, battery and mains adapter. It also has a hanging strap so it can be suspended as a lantern, or even hung from say, a Christmas tree.

The timer allows the user to set a cut-off time. It has an on/off rotation switch so you can control whether or not the patterns rotate.

Overall, this is a superb, bright projector night light that is suitable for both adults and kids. It works as a nightlight or projector and is superb for relaxing and calming babies, kids and adults alike prior to sleeping.

This star projector can produce a myriad of different colours by combining base shades of red, blue, green and white. There are two modes: monochromatic or bi-colour, which produces purple and pink hues by combining two of the primary colours.

You can also choose to turn on the laser, which will project tiny pinpricks of green light that give the appearance of stars.

Shaped like a UFO with a back base, you can plug it into any room and transform it into a galactic wonderland.

This model comprises a timer of 1hr, 2hr or 4hrs, which is amazing if you’re using to help you or your child to sleep, and it can also be connected to music.

Although it’s not the best quality speaker in the world, it’s great for providing background music and the projection will dance along to the beat of the song or to your hand claps.

The Opard model is also controlled via a remote and has adjustable brightness settings.

The Aled Light Star Projector represents superb value for a sophisticated device. At its core, it’s a 10-colour star projector with a 360-degree rotating projector. The light emits a star-like overlay which is bright enough to fill an average-sized room.

Like most star projectors, the overlay is a mixture of a nebulae-style cloud-like overlay with pin-prick stars. It’s bright and impressive with good coverage.

There are 10 colours that can be cycled using the included remote and 4 brightness settings. The light actually has a selection of 4 overlays that can be combined to your heart’s content for some quite dazzling effects.

It’s even possible to adjust the speed of the rotation. A music mode enables the lights to flash in-time with music, which is awesome.

Yet another function is a Bluetooth speaker that can be connected to music devices for music playback via the built-in speaker. A 2-hour cut-off timer ensures that it can be left on through the night and will turn off automatically. All features are controllable via the included remote control.

Overall, this star projector boasts an impressive resume of features. The music playback and sound activiatin are stand-out features – a really cool novel little device for the money!

This model is designed more like a traditional projector, which gives you more control over the direction of the visuals.

Unlike other models, you can also slow down or speed up the LED light as it moves around the room, as well as adjust the brightness up and down.

This projector has three light modes: nebular, star or moon and star, and a range of colours and colour combinations. It is powered via a socket and comes with a remote control.

One major plus point of this projector is that it’s totally silent, compared to other models that can make a soft whirring noise as they move the projection around the room.

This means it’s ideal for sleeping as the noise of the rotary won’t interfere with your snooze. It’s a compact, stylish device that can light up a large space – around 200ft of ceiling – and also consumes very little energy.

The Tanbaby star projector is a great option; slightly pricier than the average but the company has a good reputation and all reviews are really solid.

It has all the classic features: a compact design with a crystal bulb, a range of projection settings with 19 colour and light combinations, adjustable brightness and a timer.

It is controlled via the included remote and also has some buttons on the machine itself. The visual quality on this model is very high-res and it projects some really clear, stunning visuals into the room. The Tanbaby star projector comprises a speaker, with Bluetooth and USB connection, which has a sound sensor so it will pulse along to the beat of your tunes.

It’s worth mentioning that these sound sensors work best with music that has a strong, pronounced rhythm and they will also respond to a loud clap or a shout!

You can change the rotary spin speed via the remote, which lets you decide how quickly you want the projection to move around the room whether you’re looking for some soothing sleep visuals or a more upbeat party atmosphere.

Considerations When Choosing a Star Projector

Star projectors work by way of an internal rotary that moves the projected images around the room. This rotary can make a fairly noticeable whirring noise, which can detract from the soothing effect of the projector.

If you’ll be using the star projector as a sleeping aid, make sure to check the reviews or search specifically for a silent model.

If you’ll be using it more to create a romantic or party atmosphere, this will be a less pressing consideration.

Almost all star projectors come with a remote control that lets you do things like assign the colour combination, adjust the brightness and set the timer.

However, more advanced models will have their own application that can be downloaded onto a smartphone, removing the need to carry an extra remote.

In addition, these models are often compatible with your digital assistant via Wifi connection, making it even easier to communicate with your star projector.

Many star projectors have a speaker built-in, which can be amazing for setting a soundtrack alongside your visuals.

Before you choose your star projector, ask yourself whether you would like to connect your music library to the speaker to make for a more immersive experience.

If so, make sure it has a Bluetooth or wifi connection so you can seamlessly sync the music from your phone.

If you plan on using the star projector to help you or your child to sleep, a timer is an indispensable feature, as it will save you from having to get up and switch the projector off in the night.

Look for a model with several timer settings, so you can get the perfect timing for your sleep routine.

Even the most basic star projectors produce mesmerising visuals that create a transformative atmosphere in a room.

However, more sophisticated models give you the option to totally customise your projection, from the colour combinations to the visuals themselves, including projections such as water waves and galactic constellations.

A star projector is a wonderful addition to your home, giving you the chance to turn your bedroom or living space into an other-worldly wonderland.

Great for helping kids to calm down for sleep or creating a unique atmosphere for a party, these versatile machines have so much to offer.

We hope our guide to the best star projectors has helped you to choose which one is right for you.