Surge protectors are a necessity for anyone powering sensitive equipment like computers, HiFis, networking equipment like servers or anything else that is voltage-sensitive.

Power surges send an increased voltage down power lines. Often, these spikes may just be a handful of volts but rarely, they can exceed hundreds or even thousands of volts, easily enough to destroy sensitive electrical equipment.

Surge protection power cables, or extension cables, are the most popular form of first-line defence.

Disclaimer: Price This Please is reader-supported. When you buy through links on our site, we may earn an affiliate commission at no additional cost to you. 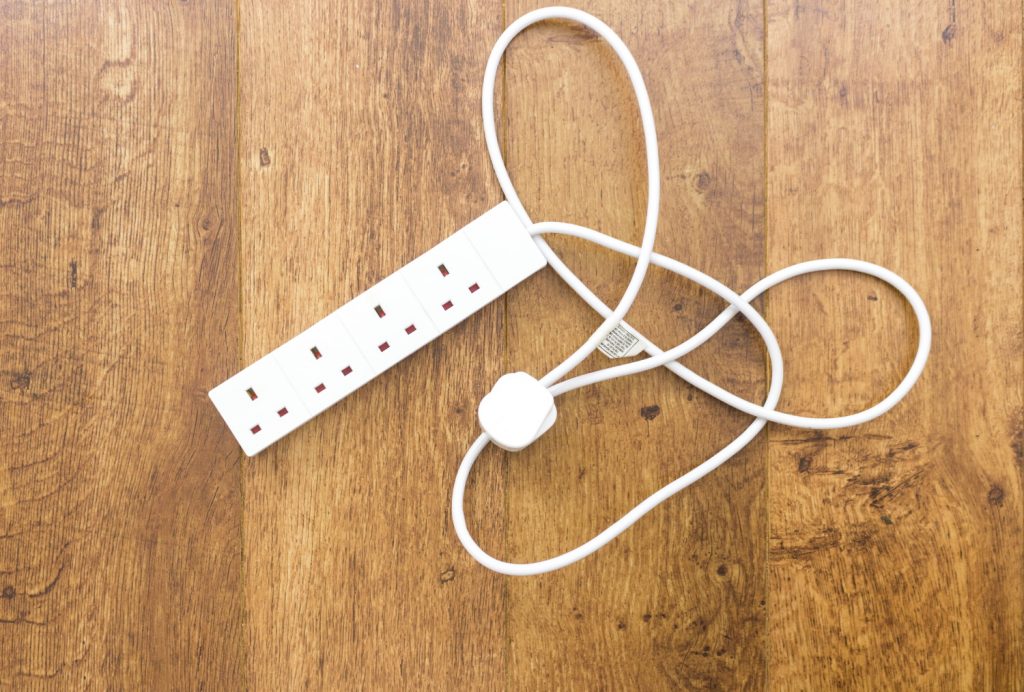 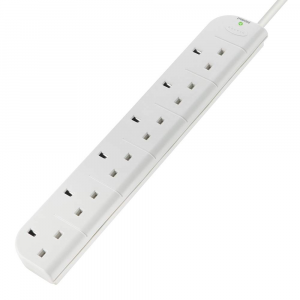 That might seem modest compared to other surge protectors on the list, but you can at least be assured that Belkin has probably measured it accurately.

An excellent feature is the surge protection indicator light that glows green when your equipment is properly surge protected.

This is a nice touch that enables you to check surge protection at a glance. The power cable itself is 3M long, so longer than average.

Aside from that, this is a fairly basic surge protector suitable for general use. It might have a lower joules rating than other models but the indicator is a useful feature that takes the guesswork out of knowing whether you’re protected or not.

With 6 plug sockets, the Belkin E-Series 6 Plug SurgeStrip is a solid surge protection extension cable from a leading brand. The indicator light tells you when you’re surge protected, which is a very handy feature.

Upping the ante with a mighty 1700 joules surge protection, the NTONPOWER Wall Mountable Multi-Plug Extension is a smart-looking extension label that should provide ample protection for an array of electronic devices.

1700 joules is very high for a standard home surge protector and should protect electric items from many power surges, meaning that this extension cable should last years.

With 8 sockets and 5 USB ports, this extension cable is decked out for multi-device use. It has a power rating of 3250w, which is also very high.

It will easily handle multiple high-power electric devices but as always, it’s not recommended that you push your luck by meeting the max limit.

In addition to the 8 power sockets, the NTONPOWER Wall Mountable Multi-Plug Extension also has 5 USB sockets with a total of 5a – 2.4a per socket.

The power cable is 1.5m long, which is reasonable, and it’s thick and durable.

The whole unit can be powered on and off via a switch and there is a power indicator light. Wall tabs enable the extension cable to be mounted on the wall.

A slight criticism may be that the power sockets are too close together, which could be awkward for funny-shaped inserts, e.g. Mac chargers.

Overall, though, this is an impressive extension cable with strong surge protection and high-powered USB sockets.

NTONPOWER Wall Mountable Multi-Plug Extension packs a high level of surge protection – that’s the main thing. It’s compact but the power sockets are pretty close together. That said, there are 8 with 5 USBS, so this extension cable has plenty of scope and can be used with many devices.

This classic styled extension cable is compact, simple and effective for basic surge protection. Each of the 4 sockets can be switched on and off independently, which is useful.

The joules protection level is not listed here but it’s safe to assume that the extension lead offers basic protection for consumer electronics.

If you’re looking for something heavy-duty for particularly expensive HiFis and PCs then it might not be the best shout, but for standard surge protection around the house, it’s still a good choice.

This budget surge protection extension cable has a highly flame retardant exterior that can withstand temperatures of some 750C.

The max load is 3150w, which is absolutely fine for connecting a few devices, but as ever, don’t push or exceed the limit.

But, for very expensive, sensitive equipment, it’s best to opt for something a bit more heavy-duty like the aforementioned surge protectors on this list.

A cheap and cheerful surge protection cable for general use. There’s no harm in replacing all standard extension cables in your home with a surge protector like this. You never know when you might need surge protection so it’s good to cover all the bases. 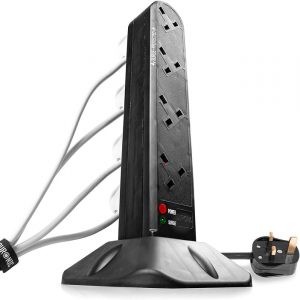 The tower design is pretty useful for connecting devices when floor space is at a premium, but you can remove the extension cable from the base if you want to use it in the normal fashion.

Though a basic, low-cost surge protector, the Duronic 8 Socket Extension Tower ST8B does have some handy features. It features both a power and surge protection indicator so you can instantly see whether your equipment is protected from surges.

If the surge protection light goes off, you’ll know you need to replace the device (remember, they don’t last forever).

Like many other surge protection extension cables, it can handle a maximum of 3000w, which is easily enough to power a full computer, AV setup, etc.

It’s not recommended that you approach the maximum 3000w capacity, though (same with any extension cable).

With 8 sockets and a flexible tower design, this is a superb value option – cheap enough that you can deck out your whole house with surge protection at a low cost.

With its convenient tower design and removable base, the Duronic 8 Socket Extension Tower ST8B represents unparalleled value for an 8-way extension socket. The dual indicator lights are very useful – you can check whether you’re surge protected at a glance.

This large, industrial-looking behemoth of a surge protector is fitted with a very solid 1500 joules of protection.

It’s quite hard to put that into context but this is well above average for a surge protector of this class. It should easily handle the vast majority of power surges that the average UK home is exposed to, and should last years.

The Klearlook Power Strip 3 USB Ports 8 Way Socket has 8 sockets with triple USB ports. A 3000w max load rating is sufficient for powering several high-draw electric devices, though it’s not recommended that you load it to the hilt.

The USB sockets provide 3.4A in total (2.4a max each), so you’ll be able to fast-charge at least one phone or tablet, if not two.

The device itself is well-made from fire retardant plastic and the layout means you can easily plugin awkward chargers (e.g. the MagSafe Mac charger). It comes equipped with a reasonably long 2m power cable – the cabling is thick and durable.

The entire extension cable can be turned off and on via a switch mounted on the top. There is also a red indicator light to tell you whether or not the device is powered on or off, which is handy. There are tabs on the back for wall mounting.

Overall, the headline here is the 1500 joules protection. 8 sockets make it ideal for running a PC and all related peripherals, with 3 added high-power USBs to boot.

Most surge protectors feature the same basic technology. They use metal oxide varistors (MOVs) which essentially absorb excess voltage, preventing it from passing through the extension cable.

After a while, these actually burn out and need replacing but this can take years if you don’t experience many or any obvious surges – but it’s still something to bear in mind.

Once they burn out, the extension cable will still work, but don’t provide surge protection.

Power surge protectors with greater joules ratings will also last longer before needing to be replaced.

Extension leads can feature anything between 2 to 8 sockets. Bear in mind that just because an extension lead has 8 sockets doesn’t mean you can plug in 8 powerful electrical devices.

Most have a max load of some 3000w, but that’s relatively optimistic and it’s not recommended that you load them to the hilt.

Many surge protection extension leads have USB outputs. These will have an amperage rating, usually between 1a and 3a. Higher = fast charging times and greater power for power-hungry USB devices.

Most surge protectors are built from fire-proof plastic that can withstand high temperatures.

Some surge protectors have indicator lights that let you know if you’re surge-protected. When the light goes off or turns red you’ll need to replace the surge protector.

Why Do You Need Surge Protection?

They can emanate from outside (e.g. from lightning) or from inside (e.g. from a faulty electrical appliance). Modern electronics are pretty well-protected against some level of power surge, and modern homes are fitted with circuit breakers, but many of these protective systems are likely old (depending on when the house was built) and their reliability is not assured.

The most obvious culprit here is lightning strikes which can boost the electrical pressure of overground or underground power lines by millions of volts. If even a few hundred volts remain in the power line by the time it reaches your house, electrical failure is possible.

But, you don’t need lightning storms to cause power surges. Power spikes occur when you turn on other electrical equipment in your house – even a hairdryer will cause a 5 to 10v power spike.

Fridges, freezers and other white goods are capable of causing much greater power spikes and are known to destroy electrical equipment, albeit rarely.

Lastly, short circuits and power cuts can also cause power spikes. Most short circuits will trip a home’s breaker but a portion of electricity may still pass through.

Power cuts themselves aren’t particularly dangerous for electronics – the dangerous part is when the power is switched back on, which can cause a voltage spike.

Surge protection isn’t worth ignoring, especially for the price vs the price of replacing expensive electronics!

6 excellent surge protection extension leads here, each with their own credentials and advantages.

The Klearlook Power Strip 3 USB Ports 8 Way Socket is extremely solid and offers a high level of protection. The socket layout is great too as you’re able to connect awkwardly sized chargers.

In runner-up position, the NTONPOWER Wall Mountable Multi-Plug Extension is sleek with high surge protection for home use.

The budget options, the ExtraStar 4 Way Extension Leads with SurgeProtection and Duronic 8 Socket Extension Tower ST8B both provide a standard level of protection for home use.

The well-reviewed Mscien 2M Extension Lead with USB is another solid option for standard home use and benefits from dual USB outputs.