If your Glow Worm boiler is displaying the F1 fault code, you will need to take action before the boiler will run again. In most cases, this code will require a visit from a registered Gas Safe engineer.

This article will review the meaning, causes and fixes of the Glow Worm F1 fault. 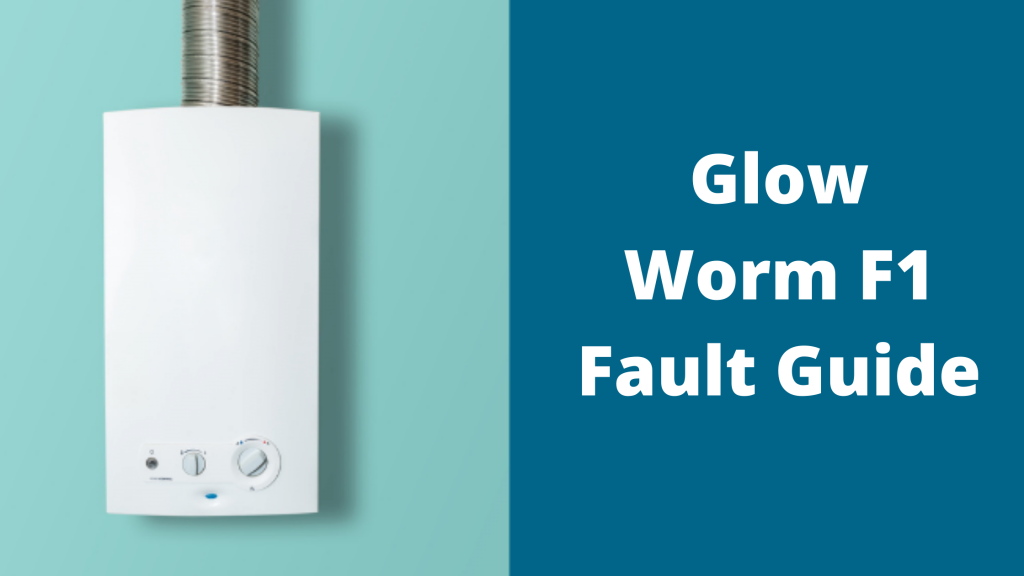 What Does the Glow Worm Boiler F1 Fault Mean?

The F1 fault codes means that there is an issue affecting the ignition sequence.

These are the stages of the heating process that involve releasing gas into the boiler unit from the mains supply, producing a spark, and igniting the gas to produce a flame.

Anything that prevents all or part of this sequence from happening will cause the boiler to lock out as a safety measure.

If everything is working appropriately, the parts responsible for lighting the fuel will send a signal to the PCB (Printed Circuit Board).

The PCB acts as a control hub for the boiler, confirming each stage of the heating process has taken place successfully before permitting the next to take place.

In the case of the F1 fault code, the PCB has been unable to confirm that some part of the ignition sequence has occurred.

This particular fault code doesn’t indicate which exact stage of ignition has failed to take place, which means there are a number of potential causes.

These range from issues with specific parts that can easily be replaced, to problems that interfere with the gas supply.

This is why the boiler won’t run when the F1 fault code is displayed, as doing so could risk gas leaking into the unit and your home.

What Can Cause the Glow Worm Boiler F1 Fault?

These electrical components work together to produce the spark which ignites the fuel entering the boiler. As with all electrical parts within the unit, they are hooked up to the PCB (Printed Circuit Board).

The wires between these parts can become faulty, or just loosened due to the vibrations within the boiler.

These vibrations aren’t usually a cause for concern, but can occasionally be caused by a fault with a larger part such as the pump or fan.

The lead, probe, or electrode could themselves cease to function, which is more likely if you have an older boiler than a new installation.

This can happen without an external cause, but it’s also possible that they have suffered water damage, as the smallest amount of moisture can interfere with delicate electrical components.

The role of this pipe is to provide an exit point for harmful gasses that are created during the combustion process. A blockage in the pipe can not only lead to excess gas within the unit, but eventually leaks into the home.

There are sensors within the boiler to detect whether the flue is clear, and will signal to the PCB if there is a blockage, causing it to lock out and prevent the ignition sequence from taking place.

In the worst case scenario, a boiler full of gasses that could not escape the flue could potentially explode if a flame was lit, so this is a crucial safety feature.

Older properties often have a flue pipe which leaves vertically through the room, making the exit point more vulnerable to blockages.

As modern homes tend to have the flue installed so it leaves an external wall horizontally, they are less likely to face this kind of issue, though it is not impossible.

Natural debris such as leaves are the most common culprits for blockages, which also makes rural properties more prone to this issue.

This is another pipe with a vital safety role, as it carries away wastewater from the boiler. All modern boilers use condensing technology, which increases their energy efficiency by reusing heat that would otherwise be wasted during combustion. Excess water from this process contains toxic byproducts, so if sensors within the unit detect that the pipe is blocked, they will prevent ignition from taking place.

Blockage of this pipe is most common in cold weather, as it is prone to freezing over. You may be able to detect this yourself by looking for the white plastic pipe that leaves your home, usually at a diagonal angle to help the water run away safely.

This component pushes the harmful gasses away from the boiler and into the flue pipe. It is one of the first parts to switch on during the heating process, which must be confirmed by the PCB.

If wiring between the two has become loose, or the fan has a general electrical fault, the PCB will lock out before any other processes can take place.

Modern fans have more than one speed setting, so it may be set to an inappropriate speed. This is more likely in new boilers or those which have recently had repairs completed involving the fan.

Gas needs to be flowing freely into the unit for it to light. Common factors that prohibit this are a frozen gas regulator, stuck gas valve, and blocked burner.

The regulator is the part of your outdoor gas meter which controls the pressure of gas entering your home, and in winter can become stuck at an inaccurate reading due to freezing.

The valve controls the flow from mains supply to the boiler unit, and over time can become stuck in the closed or partially closed position.

When it is working correctly, the gas travels through small openings called burner jets to be ignited. These are tiny parts, so can become blocked with tiny amounts of debris and carbon from the combustion process.

How to Fix a Glow Worm Boiler F1 Fault

These fixes will need to be undertaken by a Gas Safe registered engineer unless stated otherwise.

If The Ignition Lead, Probe or Spark Electrode Are Faulty

When testing the functioning of electrical parts, an engineer will use a tool called a multimeter. This takes resistance readings that will highlight any areas which are not receiving power or doing so intermittently.

If loose wiring and connections are the issue, these can be secured or replaced, and spares for this work are very cheap.

If they suspect excess vibration has caused fixtures to come loose, they may want to check over the rest of the boiler for malfunctioning parts.

If these parts need to be replaced entirely, they are usually priced at under £50 each.

Further costs may be incurred if they have faced water damage, as the engineer will need to find the source of the leak.

Common culprits are a cracked heat exchanger or a faulty pump, which can be expensive to replace if beyond repair.

If The Flue Pipe is Blocked

It may be possible for an engineer to spot a blockage with a visual inspection of the pipe’s exit point, and remove it manually.

However, they may need to conduct further testing to check that the flue is sealed properly and debris hasn’t travelled further down the pipe.

There are specific legal guidelines regarding the installation of flues, related to their length, placement on exit, and security of sealant.

If an engineer discovers that any of these factors don’t meet regulations, more time-consuming updates will be required.

The pipe’s exit should be protected by a flue guard, so this can be fitted at the time of repair to prevent further blockages, at around £50.

If The Condensate Pipe is Blocked

If you can see that the pipe is frozen over and can safely access it, you may be able to defrost it yourself.

The best way to do this is to gently pour hot water over the pipe, making sure that it’s not boiling as this can damage the plastic. You can also use a hot water bottle if you’d like to avoid spillage.

Reset your boiler once defrosting has completed, and the fault code should clear if this was the cause.

When to Call a Gas Safe Engineer

If you’re unable to reach this pipe, an engineer can thaw it out for you. They may also suggest fitting a larger pipe or adding insulation to it, which can prevent repeat issues.

The parts required for these jobs are quite cheap, so the overall cost will depend more on the labour time needed to access the pipe and conduct repairs.

If The Fan is Faulty

Changing the speed setting on a fan will be a simple task for your engineer, with no extra parts required.

If the fan has sustained significant damage, it will need to be replaced, usually costing £200-250.

If There is a Gas Supply Issue

If the gas regulator is frozen, an engineer will be able to defrost this and prevent repeat issues by insulating the meter box, which they may refer to as lagging.

A blocked burner jet is also a cheap problem to repair, as they can be removed and cleaned without any costly replacements.

However, if the gas valve has become stuck, it is usually considered more cost effective in the longterm to replace the whole part rather than free it from the stuck position.

This is because stuck valves tend to repeatedly have this issue once it has begun. The price for this part depends on the model of your boiler, but £200-300 is a rough estimate.

Get Free Quotes to Fix Your Glow Worm F1 Error