The Glow Worm F75 error is usually a simple fix and one of the most common faults found on the Glow Worm fault.

This article will cover everything you need to know about the F75 fault on a Glow Worm boiler. 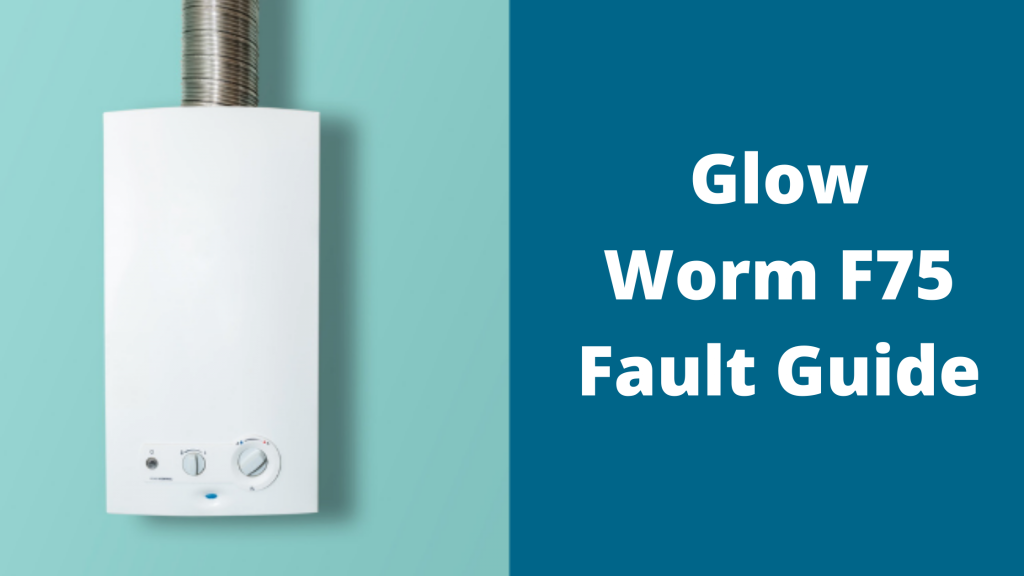 What Does the F75 Glow Worm Fault Mean?

In Glow Worm manuals, the F75 code is listed as “Fault: Pressure Sensor”. This sensor is an electronic component which measures the pressure of water which flows through it.

Once the sensor has taken a reading of this pressure, it sends a signal to the printed circuit board (PCB).

The PCB is a central control hub for the boiler, confirming that each stage of the heating process has taken place successfully and safely before permitting the next to begin.

In the case of the pressure sensor, the PCB wants to know that the sensor is both able to send a signal, and that this signal shows that the pressure is at a safe level.

The PCB also displays this reading on the front of the boiler, in units known as bars. When your boiler is switched off, you will likely see a reading between 1 and 1.5 bars.

When it is hot, this will rise to around 2. The pressure sensor needs to be working appropriately for this reading to be accurate.

The reason your boiler will lock out if it cannot confirm the water pressure levels is down to safety.

If there wasn’t the appropriate volume of water flowing through the system, the unit would still be burning fuel at the usual rate, leading to potentially dangerous and destructive conditions such as overheating parts.

The sensor can suffer an electrical fault that stops it working entirely. You may be able to tell if the sensor is faulty by watching when the fault code appears on the screen.

If the heating process begins and you can hear the pump working, but the pressure reading on the front of the unit doesn’t change, it’s likely that the sensor is faulty and the F75 code will appear shortly after.

As the opening of the sensor through which water flows is very small, it can easily become blocked with debris.

A common cause of these kinds of blockages is called heating sludge. This is a thick mixture of flaked rust and other debris that comes off the pipes, as water travels through them.

Eventually these pieces clog together to form a sludge, which slowly moves through the pipes and can eventually block any parts within the unit that it comes in contact with.

As this fault code relates to the appropriate circulation of water, it could also indicate an issue with the pump.

This is the large component responsible for pushing heated water away from the unit and into the pipes. If the pump is working correctly, you should hear a vibration from it as the boiler switches on.

Faulty pumps may not turn at all, or produce unusual sounds such as clanging, depending on the issue.

The pump has a shaft and bearings which are needed for it to spin freely, so if any of these parts become stuck it can eventually lead to failure.

This is another area where heating sludge can cause issues, but blockages can also be caused by air, which is known as an “air lock”.

If your pump is several years old, the bearings may just have worn down through extended use.

Modern pumps usually have more than one speed setting, so if you have had a new one installed recently, it may just be on the wrong setting.

This isn’t likely to be the case if your pump and/or boiler have been installed for a long time.

It could be the case that the water pressure is actually too low. However, with the F75 fault, this is usually accompanied by a faulty pressure sensor, rather than being the sole issue.

The water pressure to boilers tends to drop below the appropriate range a couple of times a year, so on its own low pressure doesn’t necessarily indicate an underlying problem.

Can I Fix My Own Glow Worm Boiler with the F75 Fault?

Not all fault codes can safely be addressed by trying to reset the boiler, but you can do so for the F75 fault. To rest, press and hold the power button for five seconds, a symbol similar to a cross will flash on the display, then the unit will restart.

If the pressure gauge is showing a reading below 1 bar, you can try topping up the pressure to see if this clears the fault code.

With this code, it’s likely that low pressure isn’t the only cause, so you will probably still need an engineer to check the pressure sensor.

However, it’s important to learn how to top up the boiler’s pressure as you will usually need to do so at least once a year.

Keeping things running at the appropriate levels will prolong the life of your boiler and prevent future costly repairs too.

How to Fix an F75 Glow Worm Fault

If the Pressure Sensor is Faulty

An engineer can test electrical parts such as the sensor with a tool called a multimeter.

This takes resistance readings which can be compared with the ideal specifications, to ensure that a component or its surrounding connections are functioning appropriately.

If the sensor does need to be replaced, the cost will depend on your boiler model, but an average estimate is £150-250.

If the Pressure Sensor is Blocked

Blockages such as heating sludge on the sensor will be easy to diagnose with a visual inspection. The sensor itself can be removed, cleaned, and reinstalled. It won’t need to be replaced unless it has been damaged by the blockage in some way.

However, your engineer will need to eradicate the sludge from the rest of the system, which may include the cleaning of other internal parts but will likely require a “flush”.

This is a procedure which involves sending hot water and specialist chemicals throughout the whole heating system, which dissolves collections of materials and heating sludge.

The cost for this service depends on how many radiators there are within your house, but prices usually begin at £300 as standard.

Removing sludge from the whole system rather than just the sensor is an important investment, as the problem will quickly return, and possibly damage more expensive parts.

Your engineer can also fit a magnetic filter as a further preventative measure, as these draw out flakes from flowing water to prevent them building up.

These filters usually cost under £150 and can be cleaned out with each boiler service. They both prolong the life of a boiler and prevent expensive damage and subsequent repair costs.

If the Pump is Faulty

The most simple pump issue to fix is the speed setting, if it was set incorrectly during recent work or installation. An engineer will be able to identify and rectify this quickly.

The process for dealing with a heating sludge blockage is the same as noted above. An air lock requires a slightly different approach but is simpler and less costly to fix.

The engineer will use a tool called a bleed screw to let the air out of the pump until water trickles out, after which it can be reinstalled.

If any of the pump’s parts are worn or damaged, your engineer will likely suggest a replacement, as once the pump fails it will likely fail again even if individual parts are repaired. New pumps cost £200-250 on average.

Are Glow Worm and Vaillant the Same?

When you’re searching for Glow Worm fault code meanings, you may find results for Vaillant boilers popping up instead.

This is because Vaillant bought Glow Worm in 2001, so it is no longer an independent brand. The fault codes for both Glow Worm and Vaillant boilers are often the same, which is the case with F75.

However, not all of their range use the same systems, so be sure to double check before following the advice for Vaillant boilers if you have a Glow Worm model.

Get Free Quotes to Fix Your Glow Worm F75 Error