Any code or status that appears on your boiler’s display screen can cause concern, but not all of them will require extensive work or a new boiler.

An Ideal boiler showing the status C may be functioning perfectly, or you may have noticed other issues which could point to a larger problem.

This guide will help you to understand the status, and distinguish whether you need to do anything about it or call in an engineer. 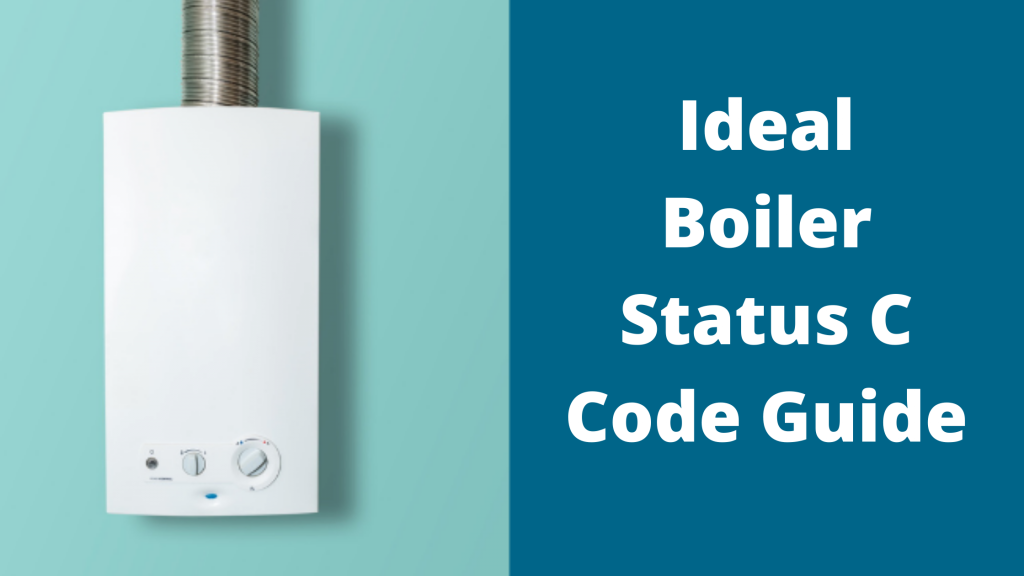 What does the Ideal Boiler Status C mean?

Ideal advises that C shows on your boiler’s display screen when there is a demand for central heating. This simply means that your boiler is heating up water to send around your radiators.

It will do this until your room thermostat signals that the house has reached the temperature you have previously programmed.

Next to the screen is an LED known as the ‘burner light’ which will either be on or flashing alongside the C status.

When the light is on consistently, this means that the boiler is currently burning fuel to heat water for the central heating system.

If the LED is flashing, it means that the system has reached the temperature you have programmed it to. The boiler will now stop heating water.

The status can indicate a problem if C and a consistent burner light are showing when the boiler is turned off or there is no need for central heating.

A fault could also be occurring if C is showing with a flashing burner light, but the heating hasn’t reached the programmed temperature, meaning that the boiler has stopped providing hot water prematurely.

Usually if there is an issue affecting your boiler, a fault code will appear which indicates the nature of the problem.

As status C is not one of these codes, it’s not as simple to identify the underlying cause when it’s appearing in error.

The causes listed below are commonly related to this status, which you may be able to identify at home but will usually require a physical inspection from an engineer to diagnose the problem accurately.

These are valves which control the flow of heated water out of your boiler, and are usually held closed by a spring. They have a motor inside which activates when power is supplied, holding open the valve so water can pass through.

This switch can occasionally become stuck intermittently, interfering with the correct activation of the boiler.

This could be the case if you are seeing status C when the boiler shouldn’t be running, or it seems to shut down and show the flashing burner light before the desired temperature has been reached.

Your boiler receives signals from the thermostat which tell it when to fire up, and when the house has reached the desired temperature. If it is sending inaccurate readings to the boiler, it could be causing the heating process to stop or start at inappropriate times.

You may notice that the thermostat screen is totally blank, which could indicate that the batteries need to be changed or the unit has become faulty in another way.

If your boiler has turned off prematurely this may be the issue, but it’s unlikely to be the case if you’re having the problem intermittently, as that would require the thermostat to turn back on.

If the thermostat is sending incorrect signals regarding the temperature, it may be that its electrical connections are being interfered with in some way.

Dust and debris can sometimes cause this, or individual wires that have stopped functioning and need to be replaced.

If status C is showing but the burner light is showing the incorrect status, this may point to an electrical issue.

For example, the light may be flashing when the boiler is still heating up water and your system otherwise seems to be working fine.

As the PCB is the central hub for all electrical processes in the boiler, this can point to faulty or damaged connections that lead to the display.

These can either become loose due to general wear and tear from exposure to vibrations, or become damaged. Moisture is a common cause for PCB damage, as the smallest drop of water is enough to interfere with the delicate electrical part.

However, if an internal leak has occurred you will likely see a fault code or have experienced more profound issues with the boiler than an inaccurate burner light.

Can I Fix My Own Ideal boiler With the Status C?

You can safely try to reset your boiler, as this status isn’t a fault code. Fault codes can indicate that resetting the boiler would cause it to run unsafely, but the C status doesn’t necessarily point to such an issue.

Press the button marked ‘Reset’ on the front of your boiler for at least 3 seconds. If this has fixed the issue, the status may be cleared from the screen, or it will remain there and the heating will turn on if it was supposed to do so.

If your thermostat has displayed a low battery warning, or the display is otherwise blank, you can try to replace the batteries.

For most units this will involve detaching the thermostat from its wall mounting plate, and removing the cover to reveal the batteries.

You may need a screwdriver to do so, and which type of battery you’ll need can differ depending on your thermostat model.

How to Fix a Status C on an Ideal Boiler

If you are seeing this status in error and haven’t been able to clear the problem with a reset, it’s likely that you’ll need to call an engineer to restore consistent functioning.

Even if the problem seems to go away on its own for a while, it’s worth booking a service in case the issue returns when you need the boiler most.

If the Port Valves are Stuck or Faulty

These valves are powered by a motor, which is constantly on while the valve is open.

This means that it’s not uncommon for the motor to run down. If this is the case, a new motor can be added without needing to replace the entire valve.

However, if a sticking switch is the problem, repairs to the unit or a total replacement are likely to be needed. The cost of port valves varies, but are usually under £100.

The labour time will depend on whether a repair is possible, and likely include draining water from the system.

If There is an Issue With the Thermostat

A physical inspection may be enough to highlight dust or debris that is affecting the thermostat’s function, in which case it should be possible to clean the inside of the unit with products such as air dusters.

If the issue is not immediately apparent, your engineer may use a tool called a multimeter to test the functioning of the relevant electrical components. A multimeter takes resistance readings, highlighting faulty areas within a circuit.

The cost of repair work to connections or wiring will depend on the complexity and accessibility of the issue, but the parts themselves are generally cheap to replace.

If There is an Issue with the Printed Circuit Board (PCB)

An engineer can test the electrical functioning of your boiler’s components using a tool called a multimeter, which takes resistance readings.

If they find that specific connections between the display panel and the PCB are faulty, it may be possible to repair or adjust them without changing the whole part.

However, if the damage has been caused by moisture there is a high chance the entire PCB will be affected, which will cause more profound issues for the boiler further down the line.

In this case, the part will need to be replaced, which can cost around £500 as it is one of the most expensive boiler components.

Your engineer will also want to find the source of any leaks, if moisture damage has affected the PCB. This may require further repairs and replacements, which can incur further costs.

A common culprit for leaks is the heat exchanger, which can crack due to a build up of limescale.

Which Ideal Boiler Models Use the Status C?

While fault codes can vary by model of boiler, the C status is used across Ideal’s whole range. This means that whatever type of boiler you have, C and a flashing burner light should indicate that the required temperature has been met.

Despite this, different models can be prone to some issues more than others, so you won’t always be able to predict the cause of a problem related to the C status.

Get Free Quotes to Fix Your Ideal Boiler C Status