If the display on your Ideal Logic boiler is showing the f2 fault code, an error has happened within the unit that needs to be fixed.

As this will usually require work within the boiler, you will likely need to call a registered Gas Safe engineer.

This guide will help you to understand the issue, what repairs may be needed, and also explain a couple of measures you can try at home before calling an engineer. 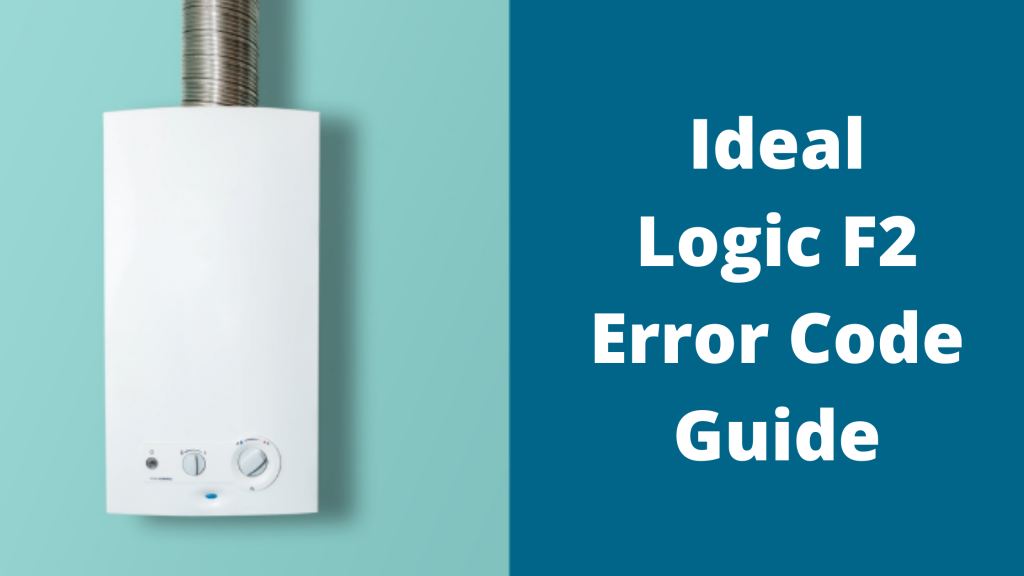 What Does the F2 Fault Code Mean?

The simplified meaning of the code given by Ideal is ‘Flame Loss’.

Inside your boiler is a printed circuit board (PCB) which acts as a control centre for the unit. Each stage of the heating process must be confirmed by the PCB, before it will permit the next stage to begin.

If it cannot confirm a stage, such as the flame being lit, it will stop the boiler from working and show a fault code.

This is called ‘locking out’ and ensures that your boiler doesn’t continue the stages of the heating process without all parts in full working order, as this can damage the unit and risk leaks or even explosions.

What Causes the F2 Fault Code?

In order for your boiler’s flame to ignite and stay lit, it must be receiving enough fuel from your gas supply. Between your mains supply and the boiler is a valve which controls this flow of gas into the unit.

When in full working order, the valve can stop at points between open and closed, only permitting the exact amount of gas required to flow through.

Over time this valve may become stuck in a closed or half-closed position, stopping gas from flowing freely into the boiler unit.

Even if some gas can travel through the pipe, the valve usually needs to open fully to meet high demands on fuel.

This means that the valve could have been stuck for a while, but it would only become a problem when you request the maximum amount of gas from your boiler.

Boiler Fan is Faulty or Set to the Wrong Speed

The fan is a crucial safety feature of any boiler system. It doesn’t cool down the unit like a regular fan might, instead it pushes away waste gases that are created during the heating process.

These are usually referred to as ‘flue gases’ and the fan blows them down the ‘flue pipe’, which travels away from the boiler and out of your home.

As these gases are toxic, the boiler’s PCB needs to confirm that they will be vented from the unit. If it detects any fault with the fan, it will lock out and stop the boiler from lighting.

In the case of the F2 fault code, a fan issue would have been detected after the flame had been lit, meaning it would be put out as the boiler locked out.

If your boiler was recently installed or had repairs, the fan could have been set at the wrong speed for your system. This would prevent it from venting flue gases.

The fan is wired up to the PCB to enable the transmission of signals between the parts. The wiring may become damaged or loose through vibrations in the boiler, preventing the PCB from confirming if the fan is working properly.

If you have an older boiler the components of the fan itself, such as the bearings which allow it to rotate, may have broken down through extended wear.

Issue with the Flue Pipe

The flue is the large white pipe that comes out of your boiler and is where the fan pushes out toxic gases, either horizontally from the side of your house, or vertically from the roof.

If this pipe becomes blocked or damaged, leaving nowhere for the gases to travel, your boiler will lock out, extinguishing its flame.

This issue is more common with vertical flues that have not had a guard fitted that stops debris such as leaves from entering the pipe. Blockages may also be caused by parts of the pipe breaking off due to old age or weathering.

Problem With the Gas Pressure

For the boiler’s flame to remain lit, fuel needs to be travelling at a sufficient force and speed from the mains to the burner.

This is what is known as gas pressure and your boiler has a gauge on the front which measures this pressure in units called bars.

Fluctuating pressure between 1 and 2 bar is usually not a sign of a serious problem, though sudden or repeated spikes and drops are more likely to indicate an issue.

If this has caused the f2 fault code, it means the drop was sudden enough to put the flame out after it had been lit.

Local works from your fuel supplier may have interrupted the flow of gas to your property, or the meter that regulates how much gas enters your property could be faulty.

This is most likely to occur in the winter, as these meters are usually installed outside and can become frozen over.

Can I Fix my Own Boiler with the F2 Fault Code?

As the f2 fault most often involves an issue with the gas supply or parts within the boiler unit, it’s unlikely you will be able to fix the problem legally and safely.

Before calling an engineer, you can test other gas-fuelled appliances in your home. If none of these are working, it is worth calling your supplier first.

This is a free way to confirm whether any local works are affecting your supply, or if you have been cut off for another reason.

How to Fix the F2 Fault

If the Boiler’s Gas Valve is Stuck

It will be simple for an engineer to determine if the gas valve is able to move freely or not.

If the part is otherwise in good condition, it may be possible to remove the valve, and reinstall the same part so it is no longer stuck.

However, if the valve has deteriorated and will no longer run smoothly, the engineer will replace it.

This part can often be expensive, so it wouldn’t be unusual to pay £300 for the full repair – this includes the part, as well as the labour involved in diagnosis and repair.

If the fan was set to the wrong speed during installation or repairs, the installer or an engineer will be able to rectify this very quickly without any replacements needed.

If this isn’t the case, they will check the wiring and connections of the fan first, using a multimeter to detect any interruption to the circuit between fan and PCB.

If this is the issue, they will need to replace the wiring, which doesn’t require any expensive parts.

However, they may want to check whether the wiring was damaged by excess vibrations within the unit, as this can indicate that other parts such as the pump are faulty.

Fans that have become worn down and faulty will usually need to be replaced rather than repaired. The cost of the part will depend on your boiler model, but £250-300 is a rough estimate of the price of replacement and labour.

If There Is An Issue With the Flue Pipe

An engineer will inspect the pipe for debris or deterioration, which may require a pressure test if the blockage isn’t visible from the end of the pipe.

If debris has caused the issue, this can be cleared out without replacing a pipe, though the engineer will likely fit a flue guard to prevent further blockages.

This is a cheap part, but the cost of labour will depend on the length of the diagnostic and unblocking process. If the pipe itself has broken, either part or all of it will need to be replaced.

The cost of this will depend on the length of pipe needed, which will also affect how long the repairs will take.

If There Is a Problem With the Gas Pressure

An engineer will service your house’s gas supply to determine where the pressure drop is occurring. They may advise that the issue is with your supplier, in which case they won’t be able to fix this.

If a frozen gas meter is the culprit, they may be able to add insulating material around it to prevent future freezing.

Which Ideal Models Use the F2 Fault Code?

Ideal’s fault codes are standardised for their Logic range.

This means that any type of Ideal Logic boiler showing the f2 fault code has a flame loss issue, whether it is a heat only, system, or combi boiler.

Get Free Quotes to Fix Your Ideal F2 Error