If your Ideal boiler is showing F3 on its display screen, this indicates a fault with the unit’s fan.

Due to the crucial role the fan plays in ensuring your boiler is running safely, it is highly likely that you will need to call a registered Gas Safe engineer to respond to this fault code.

This guide will help you to understand what the role of the fan is, some common reasons that it becomes faulty, and what you will need to do next to get it fixed. 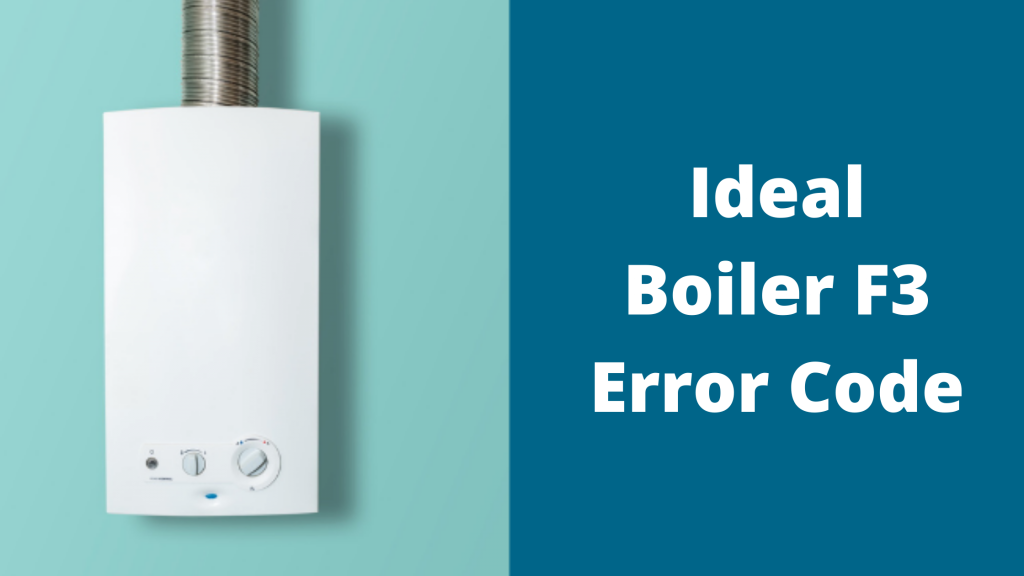 What Does the F3 Fault Code Mean?

The basic explanation provided by Ideal for this code is “Fault With Fan”.

Unlike other fans, the one in your boiler doesn’t serve to cool the unit down. Its job is to blow the waste gasses produced in the heating process safely away from the boiler and your home, through a pipe known as the flue.

This makes it one of the most important components in terms of safety, as the gasses that would otherwise linger in the unit could damage the boiler’s components, or even cause gas leaks that would be dangerous to humans.

Because of this, the fan turning on is usually the first stage in the heating process.

If the printed circuit board (PCB) that controls this whole process can’t confirm that the fan is running, it will stop the boiler from functioning.

What Causes the F3 Fault Code?

Fan Speed is Too Low

In order for the fan to push harmful gasses out of the flue pipe, it needs to be running at high enough speed.

This speed ensures that draughts and winds from outside do not send gas back into the boiler.

If your boiler is new or in a new location, it’s possible that the fan wasn’t set to the correct speed during installation.

In older boilers, a loss of fan speed is more likely due to damage or failure of the components of the fan.

Fan Bearings are Jammed or Burnt Out

If your boiler had already been noisy before the F3 fault code appeared, it’s likely that the bearings in your fan have stopped functioning properly.

Bearings are small metal parts that allow the fan to spin around a shaft.

If any of them become stuck, the fan will be unable to complete a turn.

These parts can also wear out over time, due to the high levels of friction and vibration they are subject to.

In order for the PCB to receive the signal that the fan is functioning appropriately, the components need to be connected to each other via a wiring harness.

If you have recently had the boiler fitted, it’s possible that the wiring wasn’t set up properly during installation.

However these components are prone to become loose due to the high intensity of vibration in the boiler, particularly around the fan and system pump.

While this can happen over long periods of time, increased vibration can also be an indication that these other parts are not functioning optimally.

A leak within your boiler unit can cause damage to all of the components, leading to a variety of fault codes. As the PCB controls the fault code system, if it suffers water damage it may also show the wrong codes.

In this case, the F3 fault may not indicate a problem with the fan, but any damage to the PCB is equally important so will still need to be looked at.

If the fault code is accurate, the wiring and connections between the fan and the PCB may have become wet and therefore damaged. Leaks within a boiler unit commonly come from the heat exchanger, or the pump.

The heat exchanger is the component that allows hot gas to turn into hot water, without the two mixing.

Particularly in areas with hard water, this part is prone to a build up of limescale. With time, the pressure of this build up can cause the heat exchanger to crack, at which point water can escape.

Where a leak originates from the pump, it indicates that a seal has been broken. This can sometimes happen with old age or sustained use at too high a pressure.

It may also be due to a mixture of rust and dirt that collects throughout a house’s pipes known as heating sludge, which can cause blockages and damage.

The Fan is no Longer Functional

If your boiler was installed several years ago, it’s possible that the fan unit has degraded over time to the point of failure.

This may be the case if you have had the F3 fault code appearingly intermittently, or previous attempts to fix the issue have been unsuccessful.

Can I Fix My Own Boiler with the F3 Fault Code?

It’s a common misconception that you are permitted to change the fan unit on your own boiler.

Any work that may interfere with your house’s gas supply, or involve contact with gas, must be legally undertaken by a registered Gas Safe engineer.

The boiler fan comes under this law as it is part of a combustion system, and issues with it may include the release of harmful gasses.

How to Fix an F3 Fault Code

Remember, all work must be done by a Gas Safe Engineer, not yourself.

If the Fan Speed is Too Low

If your boiler has been recently fitted or moved, the engineer or company who did the job will be able to adjust the fan speed, before resetting the boiler.

A replacement fan won’t be needed in this case, so you will only be paying for the labour.

In older boilers, or where the reduced speed is caused by another fault, the engineer may replace the fan unit entirely.

If the Fan’s Bearings are Jammed or Burnt Out

If your fan’s bearings are jammed, an engineer may be able to loosen them without the need for replacement.

However these parts are very cheap, usually under £1 per bearing, so they may choose to update them anyway.

This will also be the case if the bearings have worn out completely, and there is nothing else wrong with the fan unit which would require a full replacement.

If the Boiler Wiring Has Become Loose or Damaged

In boilers that have been recently installed, an engineer will first check that the wiring harness between the fan and the PCB has been set up correctly.

If not, rewiring it will be a simple fix that is unlikely to require any extra parts. If the F3 fault has occurred after some time, they will need to check over other parts within the unit.

This will ensure that nothing is causing excessive vibration. If the fan or another component is at fault for this, it may need to be replaced.

The cost for this will depend on the faulty part, ranging from cheap rewiring to an expensive new system pump.

If the Boiler Wiring Has Become Wet

An engineer will use a tool called multimeter to test where the wiring is no longer functioning due to water damage.

The job of repairing any connections and rewiring won’t require any costly parts, but the source of the leak will also need to be addressed to prevent further damage.

If limescale build up on the heat exchanger is to blame, it’s likely that your engineer will perform a chemical flush to remove the limescale throughout the heating system.

As the heat exchanger has been cracked to the point of water escaping, this part will likely need to be replaced too.

This part is one of the most costly in the boiler, so it’s worth having limescale attended to in your regular boiler service, particularly if you live in a hard water area.

A flush of the system can also be used to remove heating sludge, if this has caused damage to the pump and its seals.

However, the pump may need to be replaced if it has sustained serious damage or has failed due to old age. The price for this varies significantly depending on the model of your Ideal boiler, though once fitted a new pump should last for ten years.

If the Fan is No Longer Functional

If the fan is beyond repair, or a repair would only fix the problem for a short while, an engineer will replace it with a new unit.

The cost for this service will depend on the model and year of your boiler, as the price of parts varies across the Ideal range.

Which Ideal Models Use the F3 Fault Code?

Though the F3 fault code doesn’t appear on older boilers in the Ideal range, it is now one of their standardised codes. This means that any time you see an F3 code on an Ideal boiler, it indicates a fan fault.

Get Free Quotes to Fix Your Ideal F3 Error