The FA fault is a relatively rare code to see on your Ideal Logic boiler’s display screen, so it may be causing some panic.

Fortunately, it is unlikely to mean that your boiler has become dangerous, as it has locked out to prevent unsafe functioning.

This does mean that the issue will need to be resolved before the heating system can begin again, and for this code you will need the help of a professional.

The following article will help you understand what may be behind the fault, and what an engineer will do to fix it. 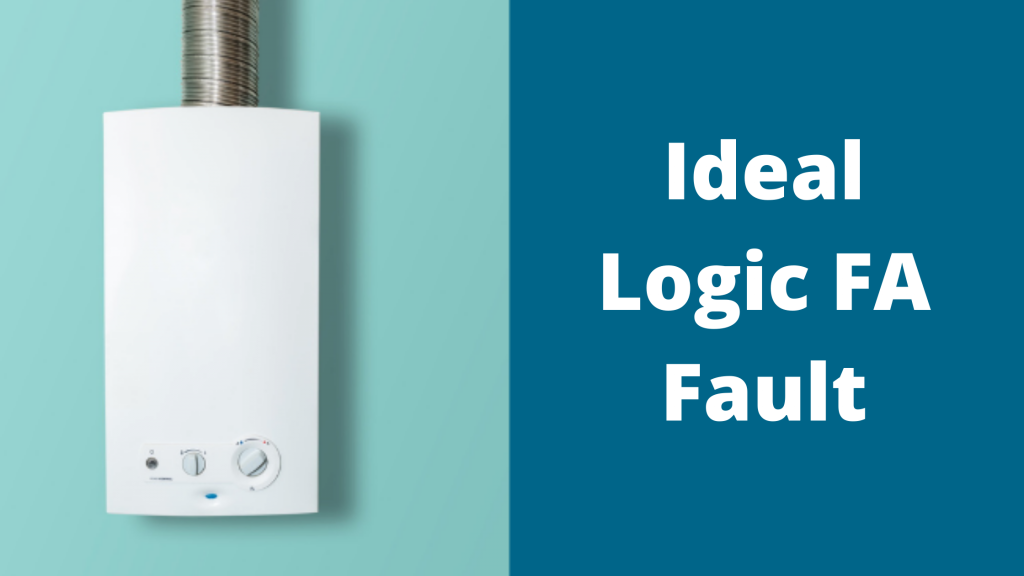 What Does the Ideal Logic FA Fault Mean?

The flow and return pipes are reversed. These are the two pipes where heated water is carried from the boiler to the rest of the system (flow), and back into the unit once it has been circulated (return).

This circulation is enabled by the pump, which should send the water in one direction only.

Boilers are only designed to work when the water is flowing in one direction, so any issue that prevents this will stop the unit from working at all.

It may be the case that the pipes have been reversed, or that an internal issue has led the PCB (Printed Circuit Board) to register that this has happened in error.

The PCB acts as a control hub for the boiler, receiving signals from each component to ensure that the heating process is taking place as it should.

It must confirm that each stage has taken place successfully before it will permit the next to take place.

In the case of the FA fault, the PCB has been unable to confirm that the water is circulating in the correct direction, leading it to lock out as a safety measure.

If your boiler has recently been installed or serviced, it’s possible that the pump has been fitted ‘back to front’.

The pump’s role is to circulate the water from the boiler to the rest of the house, so if it is installed incorrectly in this manner then the water will be travelling in the wrong direction.

This is the most common cause for the FA fault, as it is the only reason that the water could be circulating in the wrong direction.

All of the components within the boiler must be securely wired up to the PCB. Wires can cease to function, and specific connections can come loose due to vibrations within the unit.

This isn’t an uncommon result of general wear and tear, however, excess vibrations can be produced by a malfunctioning part, most commonly the pump itself.

If this is occurring in your boiler, you may have noticed louder vibrations that weren’t previously audible.

Issues of this kind can interfere with the information sent to the PCB, causing it to read incorrect signals from the pump, such as the flow reversal indicated by the FA fault.

If the pump has ceased to function entirely, the PCB may have interpreted this as an incorrect installation and displayed the FA fault code.

Inside the pump there are bearings and a shaft, both of which are required to move freely for the part to spin as needed.

These can become worn down over time, causing the pump to become stuck intermittently or completely. This is more common on older boilers, though if the pump wasn’t fitted at the correct angle it will wear down much more quickly.

Any issue with the PCB itself can affect its ability to receive specific signals, as well as interfere with the accuracy of the fault codes it displays.

This means it could be incorrectly reading that the pump isn’t working appropriately, or attempting to display a fault code for a different problem.

As with the pump’s wiring, specific connections on the PCB can become loose due to vibration. Damage is a more complex issue, as electrical components are delicate and damage to one area can quickly spread.

This is most common with moisture damage, which can be caused by the smallest drop of water coming into contact with the PCB.

Leaks within the boiler unit can have a variety of sources, but the most common are the heat exchanger and pump.

Can I Fix My Own Ideal Logic Boiler With the FA Fault?

This fault doesn’t have a DIY fix. This is because the work required to diagnose the cause involves removing the cover of the boiler unit, which legally can only be undertaken by a registered Gas Safe engineer.

You may be tempted to reset your boiler to see if the fault will clear, but in the case of the FA fault this can force it to work unsafely and risk costly damage to internal components.

How to Fix an Ideal Logic FA Fault

In most cases, you will need a registered Gas Safe engineer to diagnose and repair this fault.

However, if you have a new boiler then it’s worth calling the installer in the first instance, as they may be able to rectify the issue.

In either case, the cost of the work may be covered by Ideal if it is within the warranty period.

If The Pump Has Been Installed Incorrectly

As this fault is most likely to occur in new boilers or where the pump has been replaced, you should be able to call the installer or engineer who completed the work.

Fortunately, it’s very unlikely that you’ll need a new pump. The engineer should be able to remove the part and reinstall it facing the correct way.

If There is An Issue With the Wiring to the Pump

An engineer may be able to diagnose this issue with a physical assessment, otherwise they will need to use a tool called a multimeter.

This takes resistance readings of electrical components which will highlight areas that are not performing as they should. Securing wiring and connections can be a simple task without costly replacement parts.

However, extra labour and repairs costs may be incurred if your engineer discovers that the wiring has been disturbed by excess vibrations.

They will want to find the source of these vibrations, which may highlight further faulty parts that require replacement.

If The Pump is Faulty

Before deciding that the pump is broken, your engineer will rule out all other possibilities, as this can be a costly replacement.

In some cases, worn down bearings can be replaced without changing the whole pump.

However, it is generally considered more cost effective to install a new pump, as jamming is a problem which tends to recur even after partial repair.

A new pump will cost in the region of £250, and won’t usually take more than a day to reinstall unless there are issues with sourcing the part.

If The PCB is Faulty

If your engineer suspects that the PCB is to blame, they will test it with a multimeter to locate the areas that are malfunctioning.

It may be the case that specific connections have come loose and can be replaced or repaired. However, it is not unlikely that damage to part of the PCB will require replacement of the whole component.

This is usually the case with moisture damage, as it rarely affects a single area without spreading to the rest of the PCB.

The PCB is the most expensive component of the boiler, often reaching around £500, depending on the model. It is crucial to the system’s functioning so replacements can’t be avoided.

However, if your engineer has identified more than one part which needs to be changed, it may prove more cost effective to opt for a new boiler entirely.

This may be suggested if the PCB has suffered water damage from a faulty pump or heat exchanger, as the combined cost for replacing these parts can be higher than a new installation.

Which Ideal Logic Models Use the FA Fault?

Fault codes are standardised across the Ideal Logic range, which means that the FA fault will always indicate a reversal of the flow and return pipes.

However, Ideal advises that the code is much less likely to indicate an issue with the pump if you have a combi boiler. In this case, an electrical fault is more common, such as a wiring issue or a malfunctioning PCB.

Get Free Quotes to Fix Your Ideal Logic FA Error