If the FU fault code has appeared on your Ideal Logic boiler’s display screen, it has locked out as a safety measure.

This means that you won’t be able to use the boiler until the issue has been fixed with a visit from a registered Gas Safe engineer.

This article will cover everything you need to know about an FU fault on a Logic Boiler and common questions surrounding the fault. 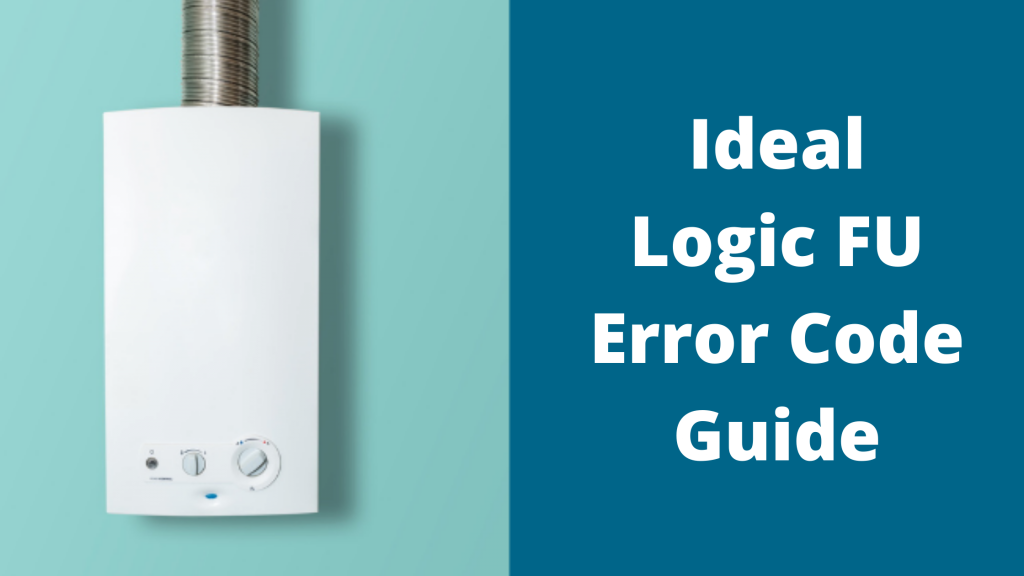 What Does the FU Fault Code Mean?

In an Ideal manual, you may see this fault code listed as ‘Diff greater than 50°C’. This means that there is a temperature differential of more than 50°C between your boiler’s return and flow pipes.

The flow pipe sends heated water from the unit to the rest of your house, and the return pipe brings water back to the boiler for reheating.

As this happens, parts called thermistors take a resistance reading on the pipes. These readings are sent to the printed circuit board (PCB), which can use them to check the temperature of the pipes.

If the PCB receives a reading that is outside of its accepted temperature range, it will lock out and show a fault code such as fu.

This protects the boiler’s parts from potential damage, as a large temperature difference is likely due to an issue that is stopping water from flowing through the system at an appropriate speed.

If the boiler continued the heating process but there was no water in the pipes, the excess heat could cause damage to internal components such as the system pump or heat exchanger.

If your boiler is showing the FU code, it has locked out before such damage could occur.

What Causes the FU Fault Code?

Boiler Pump is Blocked or Faulty

The pump is the component which controls the flow of water through the boiler and your home.

If it becomes blocked or ceases to function, the water will not be traveling through the flow and return pipes at the appropriate speed, leading to differences in temperature.

The moving parts of the pump can become stuck or worn down over time, which is more likely if you have an older boiler.

It’s also not uncommon for the pump to become blocked, usually with a mixture called heating sludge.

This sludge forms from flakes of rust and debris that fall into the water throughout the house’s pipes, eventually coagulating into a slimy mass that travels slowly through the system.

Sometimes you will hear clanging or tapping sounds if heating sludge is moving through your pipes.

The pump can also become blocked by air, otherwise known as ‘airlocking’. This could be likely if your boiler has recently had its pressure topped up, or there are small leaks in the heating system.

This part can also become blocked with heating sludge, but it is more prone to a build up of limescale.

Limescale is a build up of mineral deposits that enter the home through your mains water supply, and is found in greater quantities in areas with ‘hard’ water.

When limescale begins to collect on a part like the heat exchanger, it can become very hard. This puts pressure on the exchanger, eventually leading to breakage that allows water to leak out.

Thermistors are Faulty or Installed Incorrectly

The thermistors are responsible for sending readings to the PCB that it uses to determine the temperature of the flow and return pipes.

If a thermistor is faulty, it may be sending an incorrect signal to the PCB, or none at all. This could be due to an initial installation fault, or simply wear and tear that isn’t unusual for small electrical parts.

Fault With the Printed Circuit Board (PCB)

The PCB is the central hub of all electronic operations within your boiler. Each stage of the heating process relies on the PCB being able to confirm that the previous stage has taken place appropriately.

If an issue with the PCB has impacted its ability to confirm temperature readings from the thermistors, it will lock out the boiler with the FU fault code.

It is also worth noting that as the PCB determines which fault codes appear, this function can also become impaired, leading to inaccurate codes.

While the part can cease to function completely, it can also be affected by dislodged wiring and connections.

Can I Fix My Own boiler With the FU Fault Code?

As the FU fault code indicates an issue with the internal components of your boiler, there aren’t many DIY fixes that you can legally and safely attempt.

Before calling a Gas Safe engineer, you can reset the boiler to see if that clears the code, but if it continues to appear intermittently then you shouldn’t keep resetting it yourself, as this may lead to further damage.

To reset an Ideal Logic boiler, turn the knob on the front of the unit to the ‘Reset’ position.

How to Fix the FU Fault

Remember that because the fault is connected to something internally with your boiler, you’ll need a Gas Safe Registered engineer to fix the issue.

If the Boiler Pump is Blocked or Faulty

Your engineer will first check that there isn’t blocking the pump. If it is, they will remove the air by ‘bleeding’ the pump, just as you might bleed your radiators.

There will be no need for a new pump, but if the airlock was due to you repressurising the boiler, they may want to check that there are no ongoing issues affecting the pressure.

If heating sludge has caused the pump to be blocked, an engineer should be able to remove the part and clean it without the need of replacement.

However they will need to get the heating sludge out of the system to prevent future blockages.

To do this they will perform a ‘flush’, which means sending specialist chemicals throughout all of your house’s pipes. These are known as central heating inhibitors and will completely break down the sludge.

To prevent future build up, your engineer can install a magnetic filter. This will catch bits of rust in the system before they are able to form together, and can be cleaned every time your boiler is serviced.

It may be the case that your pump has ceased to function due to extended use, and cannot be unblocked or repaired. In this case your engineer will need to replace the part.

If your boiler is outside of the warranty period this can be an expensive job as its not uncommon for pumps to cost over £250, depending on the model.

If the Boiler Heat Exchanger is Blocked, Faulty, or Leaking

If the heat exchanger is blocked with heating sludge, the engineer will use the same process as if the pump was blocked.

This will involve removing and cleaning the part, as well as a whole system flush. Unless the exchanger has become damaged by the blockage, a new part won’t be necessary.

A limescale build up can also be treated with a flush, but your engineer will use chemicals specially designed to break down limescale.

If this has built up on the heat exchanger to the point where it is cracked and/or leaking, the whole part will likely need to be replaced along with the system cleanse.

Unfortunately this is one of the more expensive boiler parts, with £500 not being a surprising price.

If the Thermistors are Faulty or Installed Incorrectly

If there is an installation issue, your installer or a visiting engineer will be able to determine and rectify this very quickly.

If they suspect that a part is faulty, they will test the thermistor’s readings to see if they are accurate. If the part is non-functioning or sending incorrect readings, they will replace it.

Luckily, thermistors are cheap to replace as they usually cost under £20.

If There is A Fault With the Printed Circuit Board (PCB)

Before advising that the PCB has totally ceased to function, your engineer should run a number of checks to determine whether it can be repaired without replacement.

If any wiring has become loose between the PCB and other electrical components, this will be an easy fix with the only cost being any new wires required.

If your engineer has considered every other possibility and needs to replace the PCB, it can cost in the region of £500.

If other issues with your boiler have been highlighted during your service, they may advise that a new unit would be a cheaper option.

Which Ideal Logic Models Use the FU Fault Code?

All of the Ideal Logic models use the same system of fault codes. This means that the FU fault code indicates a difference.

Get Free Quotes to Fix Your Ideal FU Error