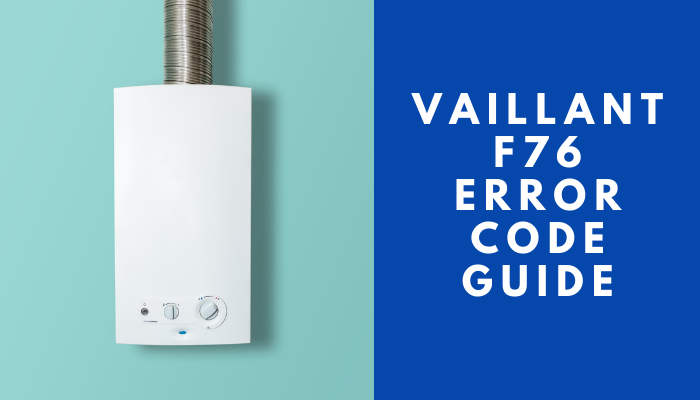 The Vaillant F76 error code affects the EcoTec plus models of Vaillant boiler, and is a serious error code which signifies a possible dangerous boiler breakdown.

At the least, parts and wiring will need to be repaired or replaced and it is likely that you will need to buy a new heat exchanger or new boiler.

What Does A Vaillant F76 Error Mean?

The F76 error code means that the boiler’s engine has overheated and it has shut down for safety reasons.

The boiler has an overheat protection function in the form of a thermal fuse on top of the heat exchanger; this acts as a circuit breaker when activated by a high temperature reading.

Overheating can occur if, for example, the boiler continues to burn when there is no water inside it which can happen if water pressure readings are not communicated with the PCB.

However, though it is serious when this happens it is actually very rare, and the error is more likely down to a wiring issue than a broken heat exchanger.

What Causes a Vaillant F76 Error?

Overheating and the F76 are serious errors for a boiler to show, and there are a couple of things that can cause it.

Air Trapped in the Heat Exchanger

If a blockage has occurred in the heat exchanger or elsewhere within the boiler then this could trigger the f76. For example, if the pressure sensor was experiencing a blockage which meant it failed to communicate low water pressure to the PCB, then the heat exchanger would remain on when there was no water to heat, causing it to overheat.

If the sensor is detecting the wrong temperature then it could cause the boiler to shut down thinking it is overheating when it isn’t.

The F76 can be caused my wiring problems between temperature or pressure sensors and the PCB. if this is the case then the PCB my signal the F76 error code because it is receiving incorrect or intermittent information.

How to Fix a Vaillant F76 Error

Unfortunately, if the F76 has been triggered by an overheated heat exchanger and tripped thermal fuse, then this cannot be repaired or replaced and the part will need replacing or you will need to get a new boiler.

The boiler cannot function at all when the thermal fuse has been tripped, so there is no way around it.

If the error has been caused due to faulty sensors, then usually these can be replaced and this will resolve the issue; similarly if faulty or damaged wiring is the issue, a Gas Safe Engineer will be able to tighten up or replace this and resolve the problem.

If blockages are the root cause of this issue, this usually will have resulted in the thermal fuse tripping. If you decide to invest in replacing the heat exchanger rather than a new boiler you will need to ensure that the Gas Safe Engineer responsible has fully serviced the boiler and cleared all blockages.

Can You Fix a Vaillant F76 Error Yourself?

You may be able to tell whether this is the problem or not by restarting the boiler; if it works intermittently then you may be lucky and find that the F76 is down to faulty wiring or sensors rather than a tripped thermal fuse. If the boiler will not restart at all, then the thermal fuse is probably tripped.

Does an F76 Mean my Boiler is Broken?

Unfortunately, the short answer is yes. Usually, when an F76 is shown, this means the heat exchanger cannot operate anymore, and this is the main component of the boiler.

It is also likely that the high temperatures that caused the error have damaged the plastic casing of this component, meaning that even if repairs could be carried out it would probably be unsafe to use.

Replacing one is highly expensive, and it’s time to make a decision on whether you want to invest money in replacing the heat exchanger or getting a new boiler.

Given that boilers are unlikely to last more than 12 years at most, if your boiler has reached the point where this error has shown then it usually more economical, not to mention reliable, to spend the money on a new boiler.

Do I Need to Reset my Vaillant Boiler After an F76?

When the F76 shows this means that the thermal fuse has been tripped due to excessive temperatures, which in turn means that the boiler simply cannot operate.

When this has happened, resetting the boiler will not cause it to work again, even intermittently.

Can I Prevent an F76 Error From Happening?

You cannot completely prevent this error from occurring, but one thing you can do is ensure that any engineer who does significant work on your system which involves draining the boiler, such as replacing radiators runs the correct P0 tests before restarting the boiler to ensure that the heat exchanger is free of air.

How much Will Fixing an F76 Cost?

The heat exchanger is the most important component of the boiler, and is the most expensive part to replace, costing up to £650 plus labour depending on the size of your boiler.

Depending on the age of your boiler it is almost certainly more sensible and economical to buy a new boiler.

Get Free Quotes to Fix Your F76 Error