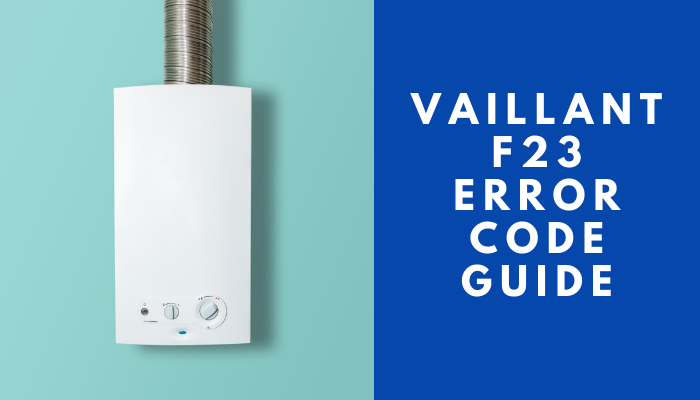 The Vaillant F23 error is applicable to the Ecotec Pro, Ecotec Plus and Ecotec Exclusive.

The Vaillant F23 error code is triggered by a large differential in temperature between the flow and return pipes, and since it has quite a few possible causes it needs fixing by a professional.

However, it isn’t a fatal error for a boiler and at most, a part may need replacing.

What does a Vaillant F23 Error Mean?

The F23 fault code relates to the differential between the flow and return.

The hot water your boiler circulates around the heating system comes out of the ‘flow’ pipe, and the water circulating back to the boiler to be reheated enters the boiler via the ‘return’ pipe.

The temperature between the two pipes will always differ.

The flow pipe will be hotter, as this is the pipe that channels freshly heated water into the heating system, and because when hot water first enters the pipes and radiators they are cold, which cools down the water.

The pipes and radiators heat up the longer the boiler is on so the water does not cool as much while travelling around the heating system, and the temperature difference between the flow and return pipes reduces.

An F23 error occurs when the temperature difference between the two pipes fails to equalise, and if the difference remains larger than 35 degrees then this is when you will see the F23 error code, which triggers a safety switch-off.

What Causes a Vaillant F23 Error?

An F23 error can be caused in multiple ways.

One cause of an F23 error is a faulty pump. Although your boiler is effectively heating water, the pump isn’t circulating it around the system fast enough. This would mean that the water is already cooler than it should be upon entering the pipes and radiators, and will therefore have cooled considerably by the time it reaches the return pipe.

The faulty pump itself also has several possible causes, some of which are easier to remedy than others.

The speed setting could be incorrect (if it is set too low, then water will move around the system too slowly and it will keep on losing temperature), the pump shaft could be stuck, or on electric boilers, the circuit board could be connected incorrectly.

Another common cause of the F23 error is an airlock, which can be found anywhere within the heating system – from the boiler pump to the bathroom towel rail.

Airlocks in radiators and towel rails can be avoided by bleeding them regularly, and an airlock in the boiler pump itself is fairly easy to diagnose as it will cause the boiler to make a knocking or banging sound.

An F23 error can also be caused by a physical blockage such as ‘central heating sludge’ (which comes from the rust in radiators and pipes) or by limescale build-up, which is more likely in an area with hard water.

This reduces the capacity of the pipes, causing water to flow through them more slowly and increasing the difference in temperature between the flow and return pipes.

It’s also possible that the fault lies with your thermistor, which simply means the temperature isn’t being correctly regulated to keep the boiler functioning properly.

How to Fix a Vaillant F23 error

If the fault lies with the pump, this can be more or less difficult to fix depending on what is wrong with the pump. If the flow setting is too low, then this simply needs to be adjusted.

If the problem is a stuck shaft or other faulty components, then the most likely fix is replacing the pump altogether, as once these errors occur they are likely to happen again.

The solution to a thermistor fault is the same, as the element is likely to degrade further once it starts malfunctioning.

The simplest fix is if the error code has been caused by an airlock. In this case, the radiators and boiler pump need to be bled, releasing the trapped air and allowing the boiler to function properly again.

If there is a physical blockage in the system then hot flushing with chemicals will be required, and after the initial problem is fixed it’s worth investing in fitting a limescale reducer and boiler filter to reduce the chances of another blockage.

Can You Fix a Vaillant F23 Error Yourself?

Since the F23 can be caused by many things, it is best to call out an experienced plumber to first diagnose the cause and fix it for you.

What you can do is eliminate the possibility that the problem is down to airlocks; if an F23 error code is displayed, make sure to bleed all your radiators and towel rails to see if this fixes the problem before calling out a plumber.

However, bleeding an airlock within the boiler pump requires removing the front of the boiler, and should only be carried out by a gas safe engineer.

When the error has been caused by something else, such as physical blockage, chemical flushing is required, which cannot be carried out by a layperson.

In these cases, the best thing you can do for your boiler is to prevent the same problem from recurring by investing in a boiler filter and limescale reducer.

These need to be cleaned at every service, but significantly reduce the chances of the F23 error occurring again.

An F23 caused by a faulty pump or thermistor will only be resolved by replacing the faulty component, which should also be done by a professional.

How Much Does a Vaillant F23 Error Cost to Fix?

Depending on the company you choose, there may or may not be a callout fee. Some will give you a quote free, others will charge to call out. If so, expect a call out and diagnosis to close somewhere in the region of £45 – £60.

The repair could be anything from £85 upwards and depends on the repair needed. As stated previously, the issue could be the pump, blockages in the system or a faulty sensor.

Does an F23 Error Mean My Boiler is Broken?

No, an F23 is not a fatal error for a boiler, and it can be fixed by a professional. If it happens often, however, then this may mean that your boiler’s pump or thermistor needs replacing.

Is it safe to use the boiler with an f23 error code showing?

An F23 error code will trigger a safety switch-off, meaning that you won’t be able to use the boiler until this error is fixed.

Do I need to reset my Vaillant boiler after an F23?

Is an F23 the Same As the Boiler Overheating?

The problems caused by a boiler overheating are very similar to those cause b the F23 error, and they can be caused by similar issues, but they are not the same thing. If your boiler is overheating you are more likely to see the error code F20.

Get Free Quotes to Fix Your F23 Error