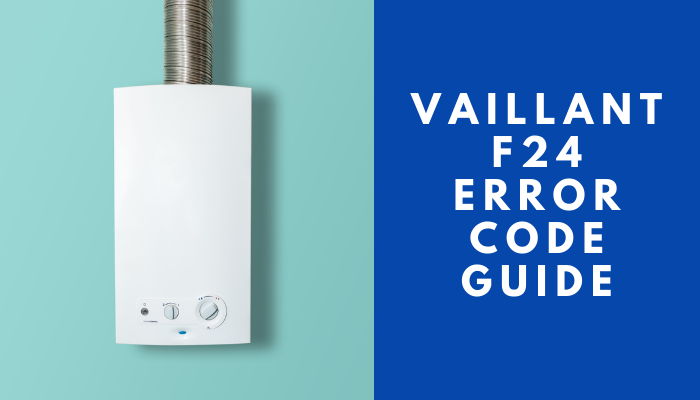 The Vaillant F24 error code is triggered by a lack of water circulating through the system, preventing the boiler from working.

It can be caused by something as simple as accidentally coles isolation valves, or a larger problem such as a faulty PCB.

What does a Vaillant F24 Error mean?

Boilers operate by allowing water to flow through them and heating it as it goes; this requires a constant flow of water to work.

An F24 error signifies that there is little or no water running through the system, preventing the boiler from working.

What Causes a Vaillant F24 Error?

There are a few possible causes of the F24 error, which your engineer will be able to diagnose.

If your boiler has recently been serviced, the isolation valves could have been accidentally left in the closed position, cutting off the water supply to the boiler and triggering the F24.

One thing which can trigger the F24 error code is a faulty pump, which can happen in several ways:

One of the components within the boiler may have seized and stopped working. Fortunately, it is fairly easy to tell if this has happened.

Although your boiler pump will usually be warm, it should not be hot to the touch: a seized internal component, however, causes the motor to overwork and become very hot.

So, if you can feel the usual vibration of the pump working plus it is extremely hot, then a seized component is likely the problem.

Debris caught in the pump can either cause parts to seize or simply create a blockage which prevents water from circulating, triggering the F24.

Build-ups of limescale and iron oxide can also develop throughout the heating system and cause the same problem.

If the speed setting is too low in a large property, then not enough water can circulate and an F24 is triggered.

An airlock is a bubble of air trapped in the system, which significantly slow or stop the water flow.

If there is an airlock either in your pump or in a towel rail or radiator elsewhere in the heating system, this could be what has triggered the f24

If there is a problem with the communication between the pump and the PCB, or if there is a wiring issue this could cause a malfunction and trigger the F24.

How to Fix a Vaillant F24 Error

If the error was caused by closed isolation valves, then the valves simply need to be opened.

If the problem is communication with the PCB then you will need to replace the PCB, which costs around £500. It isn’t economical to spend that much money on fixing a deteriorating boiler; it is more sensible to invest in a new boiler.

Airlocks can be solved by bleeding the pump as well as any towel rails and radiators throughout your property.

If debris is the problem, an expert will be able to examine the components in question for you and advise you on whether they can be cleaned or if they need replacing.

Can you Fix a Vaillant F24 Error Yourself?

If the isolation valves are the problem, you can easily fix this yourself. The valves will be below the boiler, and you can tell if they’re open because the slot for the screw head will be paralell with the pipes.

If they are closed, then the slots will be at a right angle to the pipes. To fix this, simply use a screwdriver to turn the valve to the open position.

For a seized component, sometimes a gentle tap on the side of the pump can cause it to free up – however, there’s a strong chance the part is clogged with debris in which case the problem needs to be dealt with by a professional.

If the problem was caused by an airlock, then you can bleed the pump yourself.

Close the gate valves to stop any water coming in, and slowly release the bleed screw; the air will make a hissing noise as it comes out and be replaced by a dribble of water when all the air has been released.

Don’t forget to reopen the gate valves at the end to restore the water flow to the boiler.

You should also bleed all the radiators for good measure.

Can a leak cause the F24 error?

Since this error relates to a lack of water then this could be caused by a leak; if you see pooling underneath your boiler then this is likely the cause.

The most likely place for the leak within your boiler is the central heating pump. If it’s a new boiler this could be because the new components have worked themselves loose, but it is more likely that the seals on the pump have deteriorated.

Are there other types of circulation fault?

There can be a blockage anywhere in your heating system which can cause circulation problems. On older systems, this can be fixed with a hot-flush, or a pressure-flush with newer systems.

Can I prevent the F24 error from happening?

One action you can take to reduce the chances of the F24 error is to protect your heating system from circulation faults by fitting a scale reducer. You can also get a magnetic system filter which catches heating sludge.

How much will your project cost?