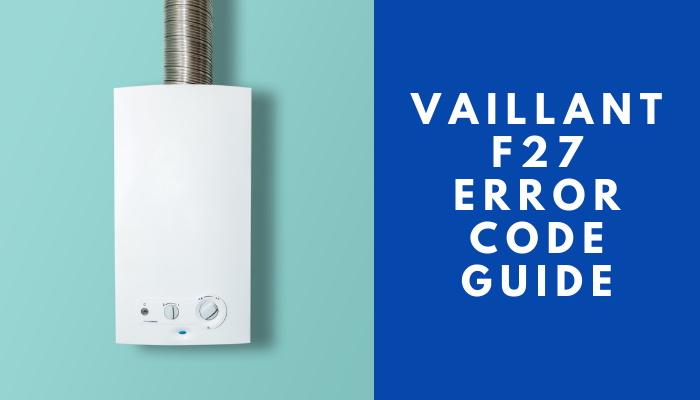 The Vaillant F27 error code affects the ecoTEC PRO or PLUS boilers, and it’s a fairly common problem in boilers manufactured between 2005 and 2012.

It is most often caused by moisture affecting the electrical components or a faulty PCB. It can also occur in conjunction with the F61 and F62, which both relate to faulty gas valves.

Because this problem involves examining ignition components and gas supply, you must call out a Gas Safe Engineer to resolve this error – do not try and fix it yourself.

What does a Vaillant F27 Error Mean?

An F27 error triggers a lockout, which means your central heating and hot water won’t work until the error is fixed.

What Causes a Vaillant F27 Error?

According to the manufacturer, an F27 error code is down to a faulty flame sensor, but actually, there are several possible causes of this problem.

This error code could be down to excessively worn spark electrode or ignition leads. These are the parts that produce the flame, so when they are worn down or broken it causes the flame to ignite incorrectly and thus triggering the F27 code.

This is likely to be the problem if the boiler is not firing at all.

The most common cause of an F27 fault is moisture on the electrical components.

This can be water dripping directly onto the parts or alternatively, since boilers are very warm it could be that water is circulating around the electronic components and settling on them, causing malfunctions which trigger the F27.

When the F27 is triggered by an electrical malfunction, it is not necessarily moisture related. The F27 also commonly displays when the PCB is failing.

The PCB is what controls the electrical components in the boiler, including the temperature sensors, gas valve and flame sensor, so when this malfunctions it can cause any number of issues.

If this is what has caused the F27 code to show, then the flame in your boiler will be fine – it’s simply the faulty PCB causing an unnecessary error code to show.

However, this doesn’t mean nothing needs doing – the PCB is the brain of the boiler and if it is faulty or broken this still needs fixing.

The gas valve is what lets gas into the boiler and also determines how much gas to let in. If it isn’t supplying the boiler with the right amount of gas, then it won’t be able to produce the correct flame.

This can be the cause as per the manufacturer’s instructions, but it isn’t common and luckily it’s very easy for an engineer to test – if it’s clean and it conducts electricity, it’s working fine.

How to Fix a Vaillant F27 Error

To fix this error, you will need to call a gas safe engineer to diagnose and fix the error properly.

Unless the problem is the PCB, replacing the faulty parts will be the fastest and cheapest option. If it is the PCB, these are expensive and time-consuming to replace. If the boiler is over 8 years old then you should consider getting a new one instead of spending time and money on a new PCB.

Can You Fix a Vaillant F27 Error Yourself?

If you suspect a leak in your system and think this might be contributing to your F27 error code, then you should turn off your water supply until an engineer can help you fix the problem.

A sudden drop in water pressure is a strong indicator that you have a leak.

However, you cannot fix this error yourself. By opening the cover on a boiler, you are working with a gas appliance; if you don’t have a Gas Safe certification, this isn’t safe.

Additionally, it’s easy to misdiagnose the problem causing the F27 and replacing the wrong parts can be a huge and unnecessary expense.

Get in touch with a Gas Safe Engineer and let them fix this problem for you.

My boiler loses pressure, is this what’s causing the F27?

Will resetting my boiler fix an F27 error?

Resetting the boiler will clear the fault code but not fix the fault.

You can reset your boiler after this error code is displayed, but if you don’t first fix the problem the boiler will simply show the error code again and eventually lockout.

After the error has been dealt with by a gas safe engineer, you should reset your boiler before starting it up again.

Can electrodes and ignition leads be reconditioned instead of replaced?

No, if this is what has caused the problem then they will need to be replaced, but this should cost under £100.

Can you keep using the boiler while it shows an F27 error code?

Generally, the first few times this code shows you will be able to simply reset the boiler and keep using it for a little while, but it will quite quickly shut off again and show the same code.

Eventually, resetting it won’t work and it will lockout. It’s best to just call a Gas Safe Engineer as soon as you see this code.

Get Free Quotes to Fix Your F27 Error