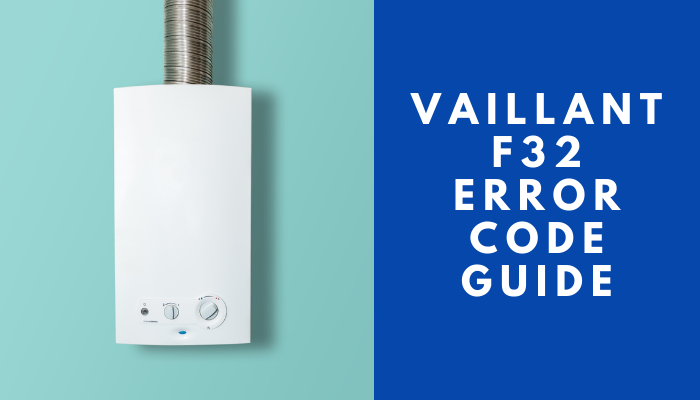 The Vaillant F32 error code is triggered by an air fault and affects the EcoTec models of Vaillant boilers.

This error code is triggered by fan failure, a blocked or leaky flue pipe, or a communication failure between the fan and the PCB. It can be a little tricky to diagnose and could result in parts being replaced so it’s best to call a Gas Safe Engineer to resolve this issue.

What Does a Vaillant F32 Error Mean?

The F32 is triggered by an air fault, which points to a problem with the fan. If the fan is unable to operate properly then this means that waste gases cannot be properly expelled, triggering the F32 code and a lockout.

What Causes a Vaillant F32 Error?

The F32 is one of the few codes that points directly to the cause of the issue – although there is some nuance as to the exact problem, this error code indicates an issue with the fan. This can mean that the fan itself is faulty, that the fan and the PCB are failing to communicate, or that the flue pipe is blocked or leaking.

It’s unlikely that the fan itself will fail since these are very sturdy components, but it can happen.

Moisture in the system can cause a fan to fail as it interferes with the electronics of the component. A possible source of moisture is a poorly installed flue pipe, which can cause a specific type of leak which causes water to interact with the fan’s electronics.

The fan can also fail due to a jammed motor or damaged bearings, which can simply occur over time. If the bearings are the cause of the issue then your fan will have been making noise over the past few weeks, so you should tell your engineer if this is the case to help them diagnose the issue.

In some cases, the fan and the PCB fail to communicate. The fan may be operating perfectly but the PCB fails to recognise that the fan is running. The PCB then won’t ignite the boiler, and this will cause the F32 error and a lockout.

If the flue pipe is the cause of the problem this could be down to a blockage, which stops the fan from operating properly as gases can’t be expelled.

It’s very tricky for the flue pipe itself become blocked, and it’s more likely that the internal parts of the flue have become clogged rather than the pipe itself.

Most flues will have a guard installed to prevent this happening, but if there is no guard then a blocked flue is a possible cause for the F32 error.

The flue can also cause a problem as mentioned above if it is installed incorrectly, causing water to return back through the flue system and drip into the boiler’s electronics.

How to Fix a Vaillant F32 Error

If the problem is a blocked flue, then an engineer can resolve this blockage and additionally install a guard to prevent future blockages from causing this problem.

If the flue is old or the blockage would be time-consuming to undo, it might be more economical to consider having a new flue installed; this would mean the error was resolved more quickly in the first instance, and also significantly reduce the chances of the same thing happening again.

If the flue is poorly installed and dripping water into the fan’s system, then, unfortunately, the fan will need replacing. However, correctly reinstalling the flue pipe will prevent the same issue from recurring in the future.

If the fan itself is not working, then firstly the engineer will check and adjust its settings, power supply and connections. If it does turn out to be broken, then this is a non-serviceable (non-reparable) component, and it will need replacing.

If the issue is down to the PCB failing to communicate with other components, then these are expensive to replace; especially if your boiler is old, it’s better to get a new boiler.

Can You Fix a Vaillant F32 Error Yourself?

Since this fault can be a little tricky to diagnose and requires blockages to be resolved or parts to be replaced, you should call in a Gas Safe Engineer to deal with this problem.

What Electrical Problems Could Cause an F32 Error?

It’s possible that a faulty PCB could cause the F32 error if it doesn’t register that the fan is operating, and it is also possible that various electrical elements have not been connected properly. You will not be able to diagnose this yourself and should wait for an engineer to do so.

How Much Does It Cost to Replace a Fan?

The price of part replacement varies from boiler to boiler, but you can expect to pay up to £200 for the fan itself and up to £350 including labour costs.

Do I Need to Reset my Boiler After an F32 Error?

Yes, you do. After an F32 error has been diagnosed and the issue resolved, the boiler should be reset before being started up again.

However, don’t make the mistake of resetting the boiler before the error has been fixed, as this won’t resolve the issue and can potentially cause more damage or be unsafe.

My Fan is Humming – Should I Reduce the Speed to Fix This?

Reducing the speed of the fan may well reduce the humming noise, but at the expense of waste gases being properly expelled through the flue pipe.

When the gases aren’t expelled properly then this can cause the boiler to lockout due to failure to remove waste gases.

In short, reducing the fan speed will remove the annoyance of the humming noise, but will cause a larger problem a short while down the line.

Get Free Quotes to Fix Your F32 Error