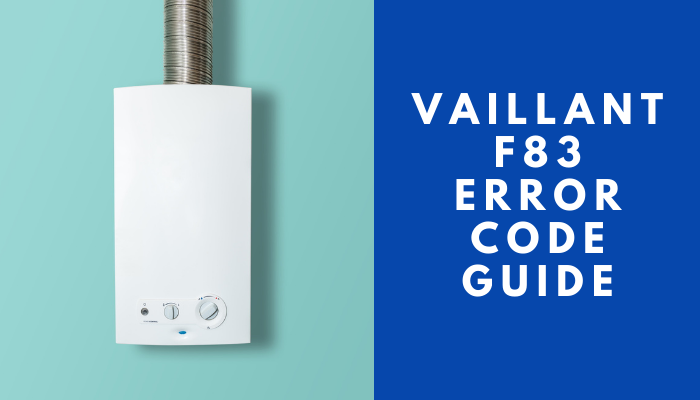 The Vaillant F83 error code affects the ecoTec plus models of Vaillant boiler.

The F83 error code means that the boiler has detected an incorrect temperature change in the flow and return pipes after the boiler is lit. This can have several causes, commonly incorrectly calibrated thermistors or faulty wiring.

Low pressure can contribute, which you can address yourself, but this error won’t be resolved without the help of a Gas Safe Engineer and it may require parts replacement.

What Does a Vaillant F83 Error Mean?

An F83 error means that the boiler has detected insufficient temperature increases when the boiler is lit.

Thermistors monitor the temperature of the water leaving and re-entering the boiler via the flow and return pipes – when the boiler is operating correctly, the return temperature will be lower than the flow temperature as some heat is absorbed by the heating system.

When the boiler is lit, these thermistors should detect a change in temperature at both ends, and if one or both detect an insufficient temperature change then this will trigger the F83 error.

What Causes a Vaillant F83 Error?

If the NTC thermistors of the flow and return pipes are incorrectly calibrated, then this can cause them to give incorrect resistance readings.

This can be caused by age or by water damage, which can be a result of a leak within the boiler.

Similarly, if the thermistors are incorrectly connected to the pipes then this means they will be unable to provide correct readings

If the wiring connecting the thermistors with the PCB is loose or damaged then this means the thermistors cannot communicate the necessary data for the boiler to operate, or they can only do so intermittently.

This means that the boiler is unable to heat the water sufficiently. This can be due to a low amount of gas entering the system, suggesting an incorrectly adjusted gas valve, or due to a fault with the heat exchanger’s combustion changer.

A problem with the combustion changer is usually caused by an extreme build-up of debris. This is very rare and will only occur with very old boilers.

Insufficient Water in the System

If there isn’t enough water travelling through the pipes then this means that the thermistors won’t be able to detect the correct temperature change. Central heating systems do lose pressure over time, and this can cause there to be insufficient water in the system. It’s also possible that there is a leak in the system or somewhere within the boiler itself.

Although low water pressure can cause the F83, it will rarely be the main or only cause.

How to Fix a Vaillant F83 Error

Thermistors can be easily replaced if they need to be, and the parts alone are inexpensive – depending on the model, they can cost as little as £30 each.

It’s important that all wiring surrounding these parts is also tested for faults or damage because new thermistors don’t come with fresh wires – if the wiring is the problem, then replacing the thermistor won’t resolve the problem.

Although you may be able to spot that a leak is the cause of the problem yourself, leaks should always be dealt with by a Gas Safe Engineer.

Can You Fix a Vaillant F83 Error Yourself?

Generally speaking, you will not be able to diagnose or resolve an F83 on your own, but to eliminate or reduce the effects of low pressure in the system you can bleed the radiators and towel rails in your heating system, and you can repressurise the boiler.

How Do I Know If The Boiler Needs Repressurising?

The water pressure is indicated on the boiler’s screen – if it is too low, then the boiler needs repressurising.

Amongst the pipework beneath your boiler, you will find its filling loop; a silver flexi-pipe with one or two taps attached.

Turn the right-hand tap until it is in line with the pipework (and fully open). Then, while keeping an eye on the pressure gauge, open the left-hand tap to allow water into the boiler.

Don’t let the pressure get too high; it should be about 1.5. After the pressure has been balanced, make sure both taps are closed fully to prevent the pressure from rising accidentally.

On ecoTec Plus models, the filling loop is built-in; for these, look for two small taps underneath the boiler. Open both of these until the pressure rebalances, and then close again.

Does An F83 Mean My Boiler is Broken?

The F83 might signify that the NTC thermistors or some wiring in your boiler need replacing, but it doesn’t automatically mean that your boiler is on its last legs. That said, it is possible for this error code to be triggered because of damage caused by a leak within the boiler, which could potentially lead to needing a replacement boiler.

Do I Need to Reset My Vaillant Boiler After An F83?

A Gas Safe Engineer will reset your boiler for you after resolving the issue. If you repressurise the boiler yourself and bleed the system, then you can reset the boiler to see if this has resolved the issue.

How Much Will Fixing An F83 Cost?

Fixing an F83 may require parts replacement of the NTC Thermistors and/or the surrounding wiring. In terms of parts alone, this isn’t very expensive. The cost of labour increases the price, but this is one of the cheaper errors to repair.

How much will your project cost?