When the F1 fault appears on your Viessmann boiler’s display screen, the boiler won’t run until the underlying issue is dealt with.

Some fault codes provide very clear indications of what needs to be fixed, but Viessmann’s codes can be harder to interpret as they tend to offer more general descriptions.

This guide will provide advice on the most common causes for the F1 fault, what you can do at home, and what repairs may be needed from a registered Gas Safe engineer. 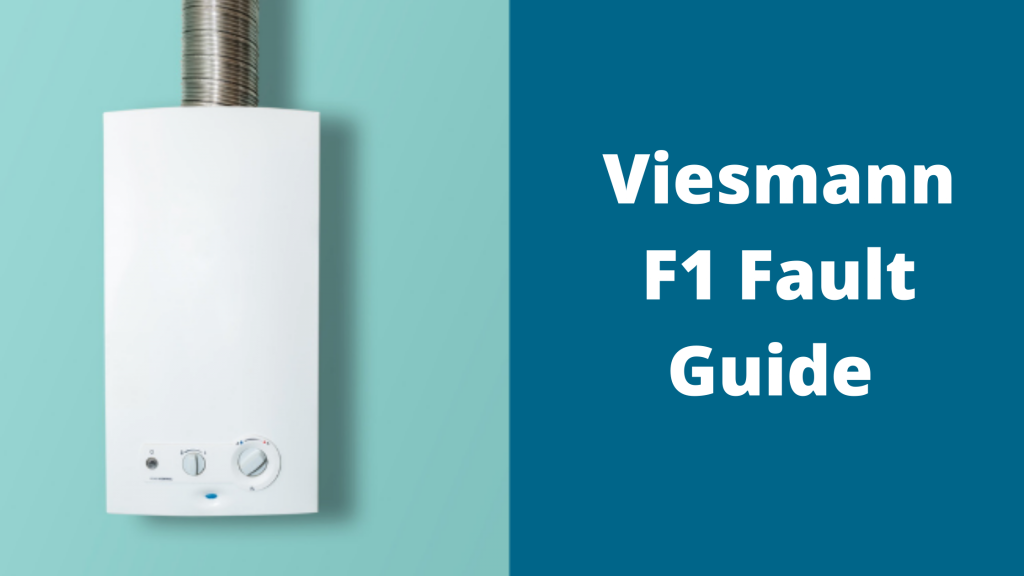 What Does the Viessmann F1 Fault Mean?

Viessmann provides a general definition for the F1 fault as “Burner in a fault state. Max. flue gas temperature exceeded”.

This means that a sensor located in the flue pipe has registered a temperature higher than is recommended for safe operation of the boiler.

Information of this kind is interpreted by the Printed Circuit Board (PCB), a component which acts as a control hub for the boiler.

As each stage of the heating process takes place, the PCB confirms that it has done so successfully before permitting the next to happen.

If anything interrupts this process, the PCB can lock out the boiler to prevent it from running unsafely if necessary.

It will then display a fault code to indicate what needs to be fixed before the system will run again.

What Causes the Viessmann F1 Fault?

This is the most common cause of the F1 fault, and doesn’t necessarily mean that you have a significant or costly issue to worry about.

Boiler pressure is the force needed for hot water to circulate around the system at an appropriate speed.

This is different to “water pressure”, which is generally used to refer to the pressure needed for water to leave the taps. The heat produced by burning fuel in the boiler is intended to raise the temperature of a set quantity of water.

If low pressure is leading to less water circulating through the boiler, the excess heat can transfer into the surrounding components, leading to overheating.

This provides a reading of the boiler pressure in units called bars.

When the system is turned off and cold, the recommended range for most boilers is 1-1.5 bar.

This can rise up to 1.8 bar when the system is hot.

Viessmann advises a slightly different recommended range of 0.5-1 bar cold, and 1-1.5 when running and hot.

Despite this, if your pressure gauge is reading under 1 bar, it’s possible that low pressure has caused the F1 fault.

Drops in pressure can happen without an underlying problem, and it’s normal to notice a drop a couple of times per year. However, if the drop has been sudden, or continues intermittently after repressurising, there is likely to be another issue present.

As F1 points to a circulation fault, it’s possible that the pump isn’t functioning correctly. This is the main component responsible for pushing heated water away from the unit and into the pipes.

If it cannot do so, the heated water can become trapped in the boiler, leading to overheating. To prevent this, the PCB must recognise that the pump is functioning before it will permit the heating process to begin.

If you have recently had a new pump or boiler installed, the part may have been fitted at the wrong angle.

If you have an old boiler, it’s possible that the pump has broken down entirely, or the bearings and shaft that allow it to spin have become jammed.

This may be a product of natural wear and tear, or have been accelerated by an incorrectly installed pump.

Air can enter the heating system gradually over time, or in greater quantities when work is undertaken such as bleeding radiators.

It can form “locks” in pipes or components such as the pump, preventing the circulation of moving parts and water.

There may not be an overheating issue at all, if the sensor that provided the high temperature reading is faulty. This small electrical component is also known as a thermistor, a word that combines “thermal” and “resistor”.

This is because it changes the resistance within its circuit to the PCB along with temperature changes, which the PCB can then register as the boiler’s current temperature to ensure safe running.

The part may have broken completely over time, or faced corrosion or moisture damage which is interfering with its functioning.

Can I Fix my Own Viessmann Boiler with the F1 Fault?

If the boiler has lost pressure, then you may be able to repressurise the boiler and sort the issue yourself.

The boiler pressure is likely to drop a couple of times per year. In most cases, you can undertake the repressurising yourself, which will prolong the life of your boiler and prevent costly damage from overheating parts.

To repressurise your boiler, look underneath the unit for two taps connected by a short length of pipe. This is known as the filling loop.

The taps’ handles will be sticking out of each pipe at a 90° angle, which means they are closed. Having found this loop, you can now do the following:

The boiler should retain the new pressure level once it is running. If this was the cause of the F1 fault, the code should clear from the display screen after resetting the unit.

How to Fix a Viessmann F1 Fault

Any work that involves removing the cover from your boiler, or risks interfering with the gas supply,  must legally be undertaken by a registered Gas Safe engineer.

This means that unless repressurising the system has cleared the F1 fault code, you will need to contact an engineer to diagnose and repair your boiler safely.

The time and costs associated with this code vary, so it is always worth checking whether you are covered by the warranty period or other insurance.

When the Boiler has Lost Pressure

If your boiler continues to lose pressure after you have repressurised it, an engineer will be needed to diagnose the cause.

They’ll want to check the system for leaks, as even small amounts of escaping water can contribute to pressure loss over time.

The cost of repairing a leak varies widely, and will depend on how easy it is to find as well as the cost of any parts that need to be replaced.

When the Pump is Faulty

If an incorrectly installed pump is causing the issue, an engineer should be able to diagnose this with a visual inspection.

They can remove and re-install the pump without replacing the part entirely. However, if damage has been done to the shaft and bearings, or the part has broken down entirely, they are likely to suggest a replacement.

This is generally more cost-effective than attempting to repair the pump, though these are expensive parts.

The price will vary depending on your boiler model, but a rough estimate is £200-300.

When There is Air in the System

The repair work required for air blockages will depend on where the air has become trapped.

An air lock in the pump will require the part to be removed, before a tool called a bleed screw will be used to let out the air until water begins to trickle out.

The pump can then be replaced and circulation should be able to continue.

Air within the pipes may be harder to diagnose, but if an engineer expects this is the issue they can vent the whole system to remove air, until they can confirm that water is flowing freely.

When the Flue Gas Sensor is Faulty

An engineer can test electrical components using a tool called a multimeter, which takes resistance readings.

Any damage to a thermistor is likely to require a full replacement, but fortunately these are relatively inexpensive parts, ranging from £20-100 depending on your boiler model.

If the damage points to a potentially larger problem, such as moisture from a leak, your engineer will want to discover the source of the issue.

This may incur further repair and parts costs, particularly if larger components such as the heat exchanger are at fault.

Get Free Quotes to Fix Your Viessmann F1 Error