F2 is a common fault code for Viessmann boilers, and if it’s currently showing on your unit’s display, there’s a problem that will need to be fixed before it can run again.

While the code is a helpful indicator that an issue has occurred, it doesn’t specify the cause, so an exact diagnosis will require a full inspection by an engineer.

This article will explain some of the potential causes, along with the type of repairs and costs you can expect. 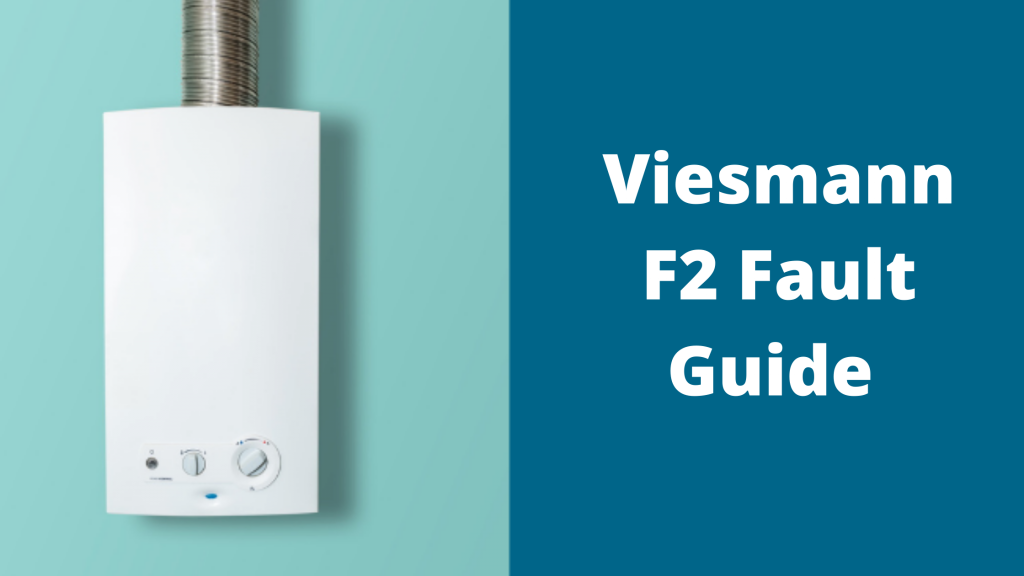 What Does the Viessmann F2 Fault Mean?

The F2 fault code means that the boiler’s burner has “locked out”, preventing it from producing the flame which burns fuel as it enters the unit, which is subsequently used to heat water.

However, it is not usually an issue with the burner itself that causes this code. It most commonly implies a circulation fault.

The component responsible for this circulation in the boiler’s pump, which pushes heated water away from the unit through the flow pipe.

Once the water has made its way through your home’s heating system, it re-enters the unit through the return pipe.

If this process can’t take place for any reason, there is a risk that hot water will not be flowing out of the boiler at the appropriate speed, which can lead to the unit overheating.

This must be avoided as it can cause serious damage to internal parts, which can be both costly and prevent the boiler from functioning completely if left unattended.

A fault code will be displayed when the boiler’s Printed Circuit Board (PCB) recognises that another component is malfunctioning.

The PCB’s job is to receive signals at every stage of the heating process, confirming it has taken place before allowing the next step to continue.

If it senses that the pump has ceased to work, or any other circulation issue is occurring, it will lock out the boiler to prevent unsafe functioning.

What Can Cause the Viessmann F2 Fault?

Heating sludge is a common cause of circulation issues, as it can build up anywhere within the pipes or on the pump itself.

It is a thick mixture that forms when rust and dirt flake off pipes as water flows through them.

When enough of these tiny bits of debris are present in the water, they can congeal together to make a sludge which travels slowly through the pipes. Eventually it can lead to partial or total blockage.

If it reaches the pump, it can clog up the bearings and shaft that allow the part to spin freely. This can lead to intermittent function or bring the pump to a complete halt.

If enough air gets trapped inside the pump, it can cause a “lock” which prevents it from spinning as needed.

Air enters the system in small amounts as water flows into the home, or in larger quantities when certain works are undertaken, such as drainage of the system.

Common signs of this issue are knocking noises from the pump and a recent decrease in pressure, which you can check on the gauge located on the front of your boiler.

Pressure is measured in units called bars, and the recommended reading is between 1 and 1.5 bar.

Firstly, the pump must be facing the right direction in order to circulate the water. If this is the issue, your boiler is unlikely to have worked to date, so it’s more common in recent installations.

Modern pumps have more than one speed setting, so it may have been set to the wrong one when installed.

This is also a problem which usually becomes apparent soon after the pump is fitted, but may also happen when there is an increased need for heating during cold periods.

No Power to Pump

The pump may have lost function entirely due to age, or the wiring connecting it to the PCB could have come loose. This generally happens due to vibrations within the boiler, many of which come from the pump itself.

Without this connection, the PCB can’t signal the pump to start or recognise that it’s running successfully.

Can I Fix My Own Viessmann Boiler with the F2 Fault?

Most causes of this fault will legally require a registered Gas Safe engineer to diagnose and rectify them, as they involve work behind the boiler’s cover.

However, if you have noticed that the pressure gauge is below 1 bar, you can safely try to repressurise your boiler before resetting it to see if this works.

Boilers lose pressure over time anyway, and most will require repressurising a couple of times a year to keep them functioning effectively, which doesn’t necessarily mean there is a fault.

How to Fix a Viessmann F2 Fault

These fixes will need to be undertaken by a Gas Safe registered engineer.

If There is a Heating Sludge Blockage

If a heating sludge blockage isn’t immediately apparent from a visual inspection, an engineer may take a water sample to test whether dirt and debris is present.

Either way, once sludge has been identified, they will need to clean it out of the system with a process known as a flush.

involves sending specialist chemicals throughout the whole heating system which clear it out by breaking down blockages.

The cost of this service will usually vary depending on the size of the heating system, but a rough estimate is £400-500, with an £100 increase per radiator.

Where the sludge has built up on the pump, this can usually be removed and cleaned without a replacement. However, if any damage has been caused to the moving parts then a full replacement may be required.

The cost for this part will depend on the model of your boiler or generic pump used, with prices ranging from £100-250.

If your boiler doesn’t already have one, your engineer may suggest fitting a magnetic filter.

These prevent sludge and limescale build up by catching flakes of debris before they can clump together, so are a great way to extend the life of your heating system.

They usually cost under £100, and can be cleaned each time you have your boiler serviced.

If There is an Airlock in the Pump

Removing air from the pump is called “venting” or “bleeding”, as the tool used to do so is called a “bleed screw”.

Using this tool, an engineer will remove the cover plate to allow air to escape, until water begins to trickle out. The pump can then be refitted and the boiler reset.

Provided there are no other issues with the boiler, this is a quick and cheap repair job. In some cases, running with air trapped inside for extended periods can cause damage to the part, requiring more costly repairs and replacement.

However, codes such as F2 are intended to stop the boiler before this kind of damage can occur.

If The Pump Was Installed Incorrectly

If you’ve recently had a new boiler, it’s worth calling the installer before an engineer as they will be able to check the pump fitting and correct its position if needed.

Changing the speed is also a simple operation, and neither of these will require lengthy repairs or costly replacements.

If There is No Power to the Pump

Loose wiring can sometimes be identified with a visual inspection, but engineers can also use a tool called a multimeter to take resistance readings of electrical components.

This will highlight any areas without power, so these can be replaced or reconnected as needed. Wiring isn’t expensive, so the cost for this service will depend on the labour time required for diagnosis and repair.

If the pump has ceased to function entirely, it is usually most cost effective to replace it. Sometimes repairs can be undertaken, but once faults begin they’re likely to reoccur, so a replacement works out cheaper than repeated repair work.

Your engineer may suggest a Grundfos generic pump rather than a Viessmann part, as these modern parts are considered to be very reliable.

Get Free Quotes to Fix Your Viessmann F2 Error