When the A07 fault appears on your Vokera boiler’s display screen, the unit has locked out as a safety measure.

This means the system will not run again until the underlying issue has been resolved. This fault has a variety of potential causes, ranging from simple malfunctions to significant internal damage.

For this reason, you will almost always need to call a registered Gas Safe engineer to accurately diagnose and fix the issue.

This article will help you to understand what may have causes the A07 fault on a Vokera boiler and the kind of repair work you can expect to get it working again. 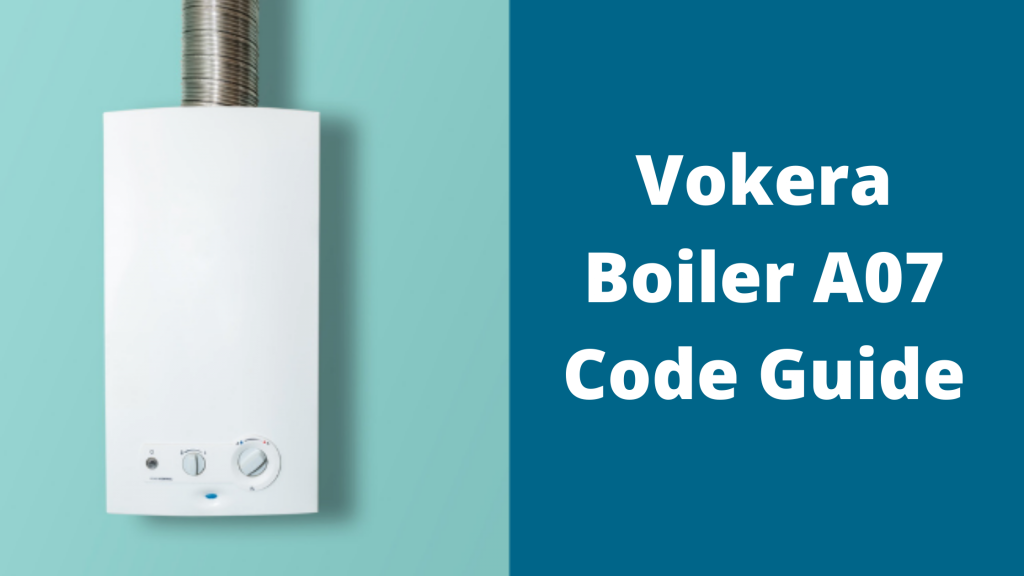 What Does the Vokera Boiler A07 Fault Mean?

The A07 fault refers to the thermistor located in the flow pipe, which is where water is carried out of the boiler into the rest of the house once it has been heated.

You may also see this part referred to as an NTC thermistor, which standards for Negative Temperature Coefficient.

The PCB acts as a central control hub for the boiler, and must receive signals that each process has taken place safely and correctly before it will permit the next to take place.

If the PCB receives a reading which is hotter than the safe operating temperature, it will lock out and prevent further steps of the heating process taking place.

This protects the boiler from damage to internal components which can occur if it continues to run while overheating.

What Causes the Vokera Boiler A07 Fault?

Limescale occurs when minerals that enter your home through the mains water supply collect together.

Eventually this build up can settle on various fixtures throughout the pipes and on the boiler’s internal components. Problems like this are most likely to occur in ‘hard’ water areas, as this means the water has a higher mineral content.

The heat exchanger is particularly prone to limescale build up. It is the part responsible for converting heated gas into heated water, making it both a crucial component in the boiler’s functioning and also vulnerable to overheating.

Where scale collects, ‘hotspots’ are formed which reach a higher temperature than elsewhere. These can weaken the plate part of the exchanger, leading it to crack.

This is one of the most common sources of leaks within the boiler unit, which can in turn cause serious and costly damage to its delicate electrical components.

The flow thermistor takes temperature readings of the section of flow pipe it’s located in, rather than a reading of all the water within the heating system.

When limescale builds up near the thermistor, it burns hotter than the surrounding water, which can prevent the thermistor from taking an accurate reading.

Any blockage which prevents water from flowing freely can lead to the heat exchanger overheating.

The part will be converting gas into heat for the usual amount of water, but when this is lessened the heat will instead be transferred into the surrounding boiler components, including the exchanger itself.

Blockages can occur anywhere, but most often the pump is affected. This is the part which controls the flow of water through the system, and its moving parts must be able to move freely to do so.

A common cause of blockage is heating sludge, a thick mixture which is formed when tiny bits of debris and rust flake off from the system’s pipes. Over time, these flakes congeal together, resulting in the sludge which can clog parts such as the pump.

Air locks are also common in pumps, and may occur gradually over time as air enters through the mains supply, or more suddenly when work has taken place that lets air in.

If this part is taking inaccurate readings, it may be signalling to the PCB that the system is running at an unsafe temperature, even if this isn’t the case.

If the PCB is unable to receive temperature readings or interpret them accurately, it may be causing the A07 fault to appear in error.

In the best case scenario, this could be due to connections that have come loose due to vibrations within the boiler.

However, a common cause of PCB malfunction is moisture damage, as even the smallest drop of water is enough to affect electronic components.

Can I Fix my Own Vokera Boiler With the A07 Fault?

It is unlikely that you can fix this issue without calling a registered Gas Safe engineer, as it requires diagnosis of the boiler’s internal components, and can cause serious damage if left unattended.

However, it is safe for you to try bleeding your radiators if you have not done so recently.

If an air lock has caused a circulation issue, but hasn’t affected the pump itself, bleeding your radiators may be enough to fix the fault.

How to Fix a Vokera Boiler A07 Fault

How an engineer will deal with this problem will depend on the extent of damage that has been caused by the limescale.

If it is caught early, it may be possible to remove the scale without replacing any major components. This can be achieved by running specialist chemicals throughout the whole heating system, which breaks down the deposits and carries them out of the pipes.

Your engineer may refer to this as a ‘flush’ or ‘power flush’. The cost of this service will depend on the size of the system needing to be flushed, which is usually determined by the number of radiators within the home.

A rough estimate for a household with six radiators is £300-350.

Once this has been done, it may be possible to fit a magnetic filter to prevent further build up, which can then be checked and cleaned each time your boiler is serviced.

These are usually fitted during installation, but can be added at a later date if the location of the unit permits it. The cost of the parts varies depending on brand, but they often cost less than £150.

However, they are always a cost-effective investment as they extend the life of your boiler significantly.

If the heat exchanger has become cracked due to the scale build up, it will need to be replaced entirely. These parts also vary widely in terms of cost, depending on the model and age of your boiler.

However, they are one of the most expensive boiler components and it’s not uncommon to pay up to £500.

Your engineer will also want to establish whether any leaks have escaped through these cracks, which will involve an assessment of the electrical components.

If these have suffered water damage, more costly repairs may be needed.

If scale has only built up in this area, your engineer will likely be able to clear it with a flush of the system. If it has caused damage to the thermistor or pipe itself, these parts may need replacing.

Fortunately, these parts are not too costly, with the thermistor costing under £20. Pipe spares can vary but are unlikely to cost more than £50.

If heating sludge has caused the blockage, it can usually be cleared with a flush, using chemicals known as central heating inhibitors.

As with limescale, the cost for this will depend on the size of your heating system.

Provided that no components have been damaged by the sludge, they will only need to be cleaned rather than replaced. A magnetic filter can also prevent sludge build up, so if you don’t have one your engineer may offer an installation.

Engineers can also remove air locks by bleeding the whole system, including the pump inside the boiler unit. The cost for this will depend on diagnosis and labour time required.

Your engineer can determine whether the thermistor is malfunctioning by using a multimeter to test the resistance readings it’s producing, and ruling out any other issues.

If it needs to be replaced this is fortunately an inexpensive job compared to other problems related to the A07 fault, with the part costing less than £20.

If all other causes have been ruled out, your engineer may test the PCB using a multimeter. If specific connections have come loose, it may be possible to conduct repairs without replacing the whole PCB.

If not, the part usually costs in the region of £500, and is an unavoidable expense as the boiler will be unable to function without it.

Get Free Quotes to Fix Your Vokera A07 Error