When this fault appears on your boiler’s display screen, you will need to address internal issues before it will run again.

As the diagnosis and repair of the A08 fault requires taking off the boiler’s cover, it must legally be undertaken by a registered Gas Safe engineer.

However, the costs and time it will take to fix this fault vary widely, so this guide will help you to understand potential causes and what can be done to address them. 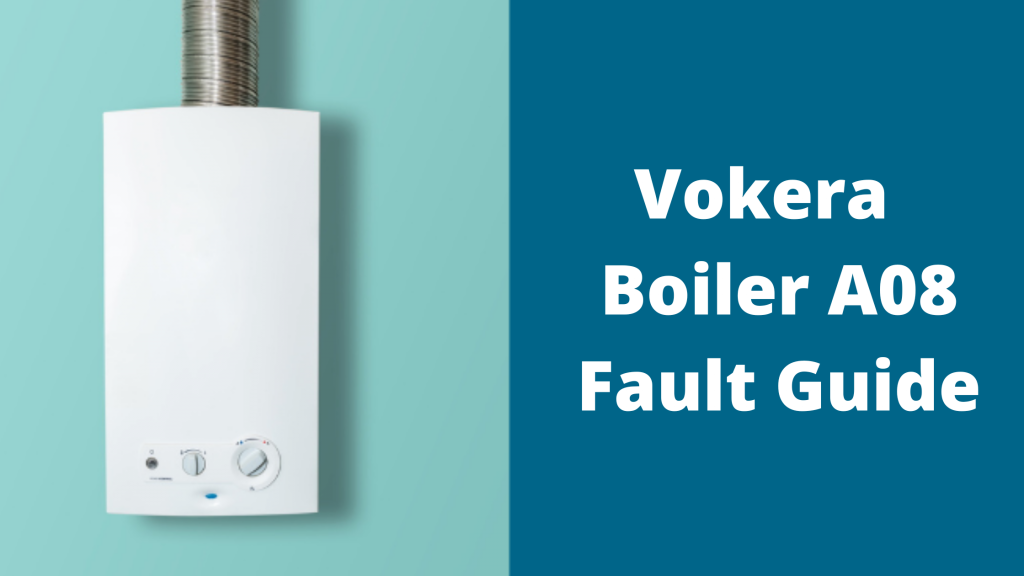 What Does the Vokera Boiler A08 Fault Mean?

Vokera gives the meaning of this code as:

What is a Return NTC Thermistor?

A thermistor is a small electrical component which changes resistance as water flows past it. These changes travel along the circuit to the printed circuit board (PCB), which uses them to measure the temperature of water in the system.

This is where the name “thermistor” comes from, as it brings together “thermal” and “resistor”. NTC stands for Negative Temperature Coefficient, which means that as the temperature increases around the thermistor, its resistance decreases

There are two of these small electrical components located in your boiler, but this fault only refers to the one located on the return pipe.

This is the pipe where water re-enters the unit after it has travelled through the heating system, as opposed to the flow pipe where heated water leaves the unit.

As the water flows back into the unit, the thermistor sends its reading to the PCB, which wants to ensure that an appropriate temperature is being maintained.

If it receives a signal which shows that the water is either too hot or too cold, it will lock out and display a fault code such as A08 in order to prevent unsafe functioning.

What Can Cause a Return NTC Thermistor Fault?

The simplest cause for this fault would be incorrect installation, where the thermistor and its relevant connections have not been hooked up appropriately.

This is only a potential option if you have recently had a new boiler, or specific work done that involved the thermistor.

However, even with older systems, the wiring and connections to the thermistor may have come loose. This is usually due to vibrations within the unit from components such as the pump.

These movements aren’t always an indication of a larger problem, and boilers generally vibrate increasingly as they age.

If you have noticed unusually loud sounds during the heating process then there may be more to this issue than a faulty thermistor.

How Will an Engineer Fix a Faulty Return NTC Thermistor?

Your engineer will first want to determine whether the thermistor is at fault, before going straight to replacement.

They can do so using a tool called a multimeter, which takes its own resistance readings. This will allow them to test whether the thermistor is accurately responding to the water around it.

It will also help them to find any areas where the connections are loose, if none are obvious during a visual inspection.

If loose connections are the problem, it will usually be a fairly simple task to rectify this and hook things back up. If the thermistor is working inaccurately or not at all, it will need to be replaced.

These are cheap parts, rarely costing more than £20, so the main costs associated with this repair will come from the labour time.

How Can a Faulty Pump Cause the A08 Fault?

If both the flow and return thermistors are working as they should, the PCB can ensure that the water in both pipes is at an appropriate temperature in relation to each other.

If the PCB receives a signal that one of the pipes is either unusually hot or cold, it will register that the differential between flow and return is too high, leading it to lock out.

If this reading is incorrect then the thermistors are faulty, but if the reading is accurate then there’s likely a circulation issue.

The pump is the main component responsible for circulating heated water away from the boiler, into the rest of the heating system.

If it is blocked or faulty in another way, it can lead to inconsistent circulation.

When an abnormally low or high volume of water travels past the return thermistor, it will affect the resistance reading it takes, leading the PCB to register a change in temperature.

The two most common blockages found in pumps are air locks and heating sludge.

Air can get into the pump when work is done that involves venting the system. Heating sludge is a mixture that forms as tiny bits of rust and debris flake into water from pipes, eventually coming together into sludge.

This travels slowly around the system, gathering more debris, and may eventually lead to a blocked pipe, or clogged part such as the pump.

As for pump failure, this is more likely to occur in older boilers as the moving parts that allow it to spin become worn down with time.

If you’ve recently had a new pump or boiler installed, there’s also the possibility that it’s just been set to the wrong speed for your system.

How Will an Engineer Fix a Faulty Pump?

If the pump has been set at the wrong speed, your engineer can simply reset it without further work needed. This is only likely to be the case if your boiler has been recently installed, so it’s worth calling the person who did so as they will be familiar with the set up.

Airlocks in the pump are dealt with using a “bleed screw”, which lets air out of the part before it can be reinstalled.

Heating sludge blockages are more time-consuming and costly to remedy, but it’s crucial to do so properly as they can cause further damage if left to spread.

Your engineer can conduct a procedure known as a flush, which involves sending chemicals and water through the whole heating system to dissolve blockages.

The cost for this depends on the number of radiators in your home, with a common base cost being £300-400 and rising £100 per radiator.

To prevent future blockages, a magnetic filter can be installed which collects debris. These usually cost under £100 and are a very worthwhile investment against future repairs. The filter can then be cleaned out with each boiler service.

If the pump’s parts are worn down, it may be possible to fix them individually but it’s likely that your engineer will suggest a total replacement.

Once pumps begin to fail they will generally continue to do so, so it’s more cost effective to replace the part. Modern pumps can cost up to £300, but costs can vary widely per model.

Can a Faulty PCB Cause the Vokera A08 Fault?

If your engineer has ruled out all of the above problems, they may advise that the PCB is at fault, leading it to not read the thermistor signals correctly or at all.

If testing the part with a multimeter shows such a fault, it will need to be replaced as the whole boiler relies on the PCB to function. These can cost up to £500.

What Does Temperature Differential Inverted Mean?

This is the most uncommon cause of the A08 fault, and is only likely to occur with very new installations. It means that the expected temperature reading from the return thermistor has come from the flow thermistor, and vice versa.

The flow reading should be higher, as it measures water straight after it is warmed by the heat exchanger.

This implies incorrect installation of either the pump, leading it to circulate water in the wrong direction, or the flow and return thermistors within the wrong pipes.

The heating system won’t function in the long term with either of these issues, so it will need to be corrected soon after the installation.

Can I Reset My Vokera Boiler with the A08 Fault?

Resetting your boiler is unlikely to fix a fault code, as they are displayed when an underlying issue needs to be resolved.

However, in this case you can safely try to reset your boiler before calling an engineer.

If this does work, it’s still worth calling someone to report the fault code, as it may not last and this will create a record of the issues to help with any future repair work.

Does the A08 Fault Mean That My Vokera Boiler is Dangerous?

It’s not likely that your boiler is at risk of creating external danger when the A08 fault appears.

However, it has locked out to prevent such danger, so it’s not a good idea to try and force it to run without fixing the issue.

The boiler must be able to accurately measure the temperature so it can stop issues such as overheating, which can cause costly internal damage to the boiler, compromising its ability to run safely.

Get Free Quotes to Fix Your Vokera A08 Error