If your Worcester Bosch boiler is displaying this code, it will have locked out as a safety measure. This means that you won’t be able to use the boiler until the issue is fixed.

You will most likely need a visit from a registered Gas Safe engineer, however there are a couple of things you can safely check before calling one in.

This guide will explain what the 227 code means, and which repairs may be needed to get your boiler running again. 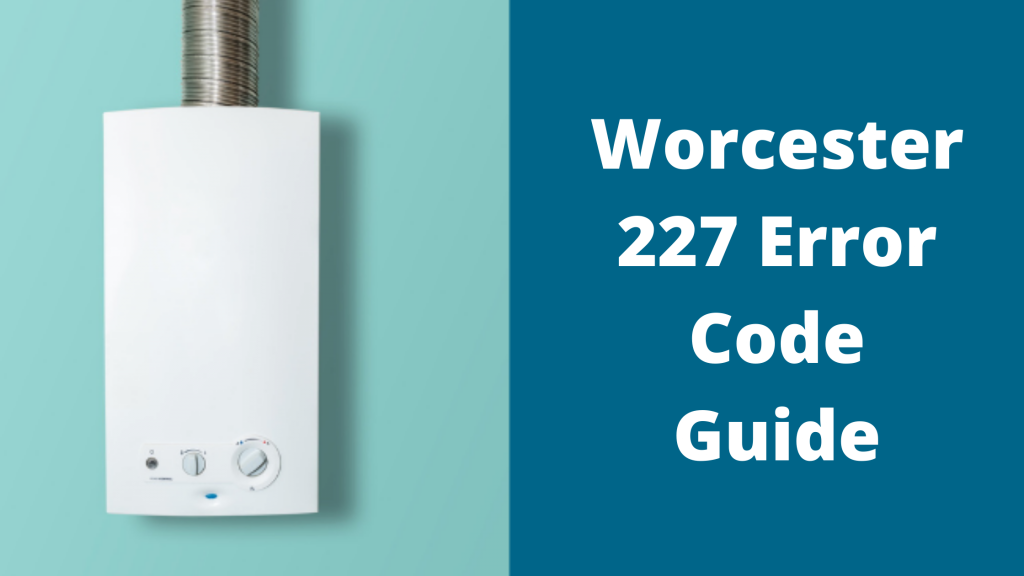 Where Will I See the Worcester 227 Fault?

The 227 code will flash alongside the EA fault code, across your boiler’s display screen. Usually, 227 will appear in the same place without you needing to do anything.

However, if you can’t see a three digit number after the EA code, you can access it by pressing the spanner/return button on your boiler unit, which brings up the information menu.

These numbers help to identify what has caused the main issue indicated by the fault code.

This means that EA is not always followed by 227, so you may see 229, 234, 261, or 269 on the display. These indicate which stage of the heating process may be causing the fault, with each code generally requiring different repair works.

What Does the Worcester 227 Fault Mean?

You may see simple definitions of this code given as ‘No flame detected’ or ‘No ionisation after ignition’.

The EA 227 code usually appears after the boiler has been unable to register a flame after at least four tries, ensuring that it’s not an intermittent error.

This means that the component responsible for detecting a flame has been unable to do so, or a fault has caused it to stop functioning. This component is called a flame sensing electrode.

It can also be referred to as an ionisation electrode or probe, as it registers the presence of a flame by detecting ions created in the combustion process.

When gas is flowing into the boiler, the flame sensing electrode will signal to the printed circuit board (PCB) whether a flame has been lit.

The PCB acts as a central hub for the boiler’s operations, receiving signals that each stage of the heating process has happened successfully.

If it cannot confirm that one of these stages has taken place, it will lock out to stop the next from happening. This prevents internal damage to the boiler’s components as well as any potential external danger from gas leaks.

What Causes the Worcester 227 Fault?

The appropriate amount of fuel needs to be flowing into the boiler for ignition to take place.

The part responsible for controlling this flow is called the gas valve, and if it has become stuck in the wrong place it could be allowing too little or too much gas into the unit.

If you have recently had repair work the valve may have been adjusted incorrectly.

With older boilers, it’s more likely that the part has become faulty due to wear and tear that prevents it from moving freely.

Another problem that crops up during cold weather is a frozen gas meter regulator. This is the part which controls the flow of gas from your mains supply into your home, and is usually located outside with the meter.

If the dial of the regulator becomes frozen still, the gas will only flow at the rate it considers appropriate to the reading it’s stuck on, which may not be enough for your boiler to light.

It could also be the case that you’re not getting gas into your whole property, rather than just the boiler. You can determine this by checking if other gas-fuelled appliances are working, such as the cooker.

The most common cause for interruption to mains supply is insufficient credit on a pre-paid gas meter, though occasionally there could be work taking place in your local area.

This is the tiny part where the flame comes out of. Due to the size of its opening, even small bits of debris are enough to block it, smothering the flame before it can ignite fully.

The ignition lead carries the electrical current needed to spark a flame, which is why you may also hear it called a spark generator.

If it has become faulty you may have noticed the boiler switching on and off, or producing odd noises, when it attempts to light.

It’s possible that a flame is being lit successfully, but the electrode is faulty and so unable to detect it. The electrode could be blocked by a buildup of dust and carbon from the combustion process, or it could have ceased to function entirely.

As the PCB is responsible for all electrical processes within the unit, even minor damage can stop the boiler from functioning. This could be localised to the connection to the flame sensing electrode, or affect the entire PCB.

A common cause for this is an internal leak, as the smallest amounts of moisture are enough to damage electronics.

The most frequent source of leaks is the heat exchanger, as this is prone to limescale build-up which can eventually cause cracks.

Can I Fix My Own Worcester Boiler With the 227 Fault?

As this code typically involves work within the boiler unit or involving the gas supply, it must legally be resolved by a registered Gas Safe engineer. However, it’s worth checking the status of your mains gas supply before calling an engineer.

How to Fix a Worcester 227 Fault

If There is an Issue with the Gas Supply

If the gas valve has recently been installed incorrectly, it will likely be a quick job for an engineer to adjust it.

In older boilers it may be possible to release a stuck valve, though it’s common that the part will need to be replaced if it’s at risk of sticking again. This will also be the case if the valve has ceased to function completely.

A frozen gas meter regulator is usually easy to defrost, but more work will be needed to prevent future occurrences. A box may be added around the meter, with insulating materials included to protect from the cold. This is referred to as ‘lagging’.

If the Pilot Jet is Blocked

Your engineer will inspect the jet for debris. If they find any, they will remove the part and clean it out before reinstalling.

This is usually a quick job that doesn’t require any costly replacements.

If the Flame Sensing Electrode is Faulty

A dirty sensor can be removed and cleaned easily. However, if the part in itself is broken, it’s often more cost effective for it to be replaced than attempting repair.

As the parts usually cost under £100, the labour costs associated with repair would likely be much higher.

If the Ignition Lead is Faulty

An engineer will test whether the lead is working correctly by using a multimeter, a tool which takes resistance readings of electrical equipment.

If it isn’t producing the appropriate readings it will need to be replaced. Ignition leads are generally cheap, but the exact cost will depend on the model of your boiler.

If the Printed Circuit Board (PCB) is Damaged

If a single connection is faulty, it may be possible for an engineer to repair the PCB without a replacement. However, as moisture tends to spread, it’s more likely that the whole part will need to be replaced.

is the most expensive boiler part, frequently costing in the region of £500. If a leak is identified, your engineer will also need to find the source and undertake further repairs and replacements.

Which Worcester Boilers Use the 227 Fault?

Though Worcester Bosch uses a huge variety of fault codes across its ranges, each one has a unique meaning.

This means that whether 227 appears on a combi, system, or conventional boiler, it will always indicate that a flame hasn’t been detected upon ignition.

Get Free Quotes to Fix Your Worcester 227 Error