If your Worcester Bosch boiler is showing A1 on the display screen, a fault has been identified that must be rectified before your hot water and central heating system will run effectively again.

Sometimes this can be fixed on a DIY basis, but most often you will need to call an engineer to accurately diagnose the cause and conduct necessary repairs.

This guide will help you to understand what’s behind the A1 fault, signs that might indicate what has caused it, and what will need to happen before your boiler can get up and running again. 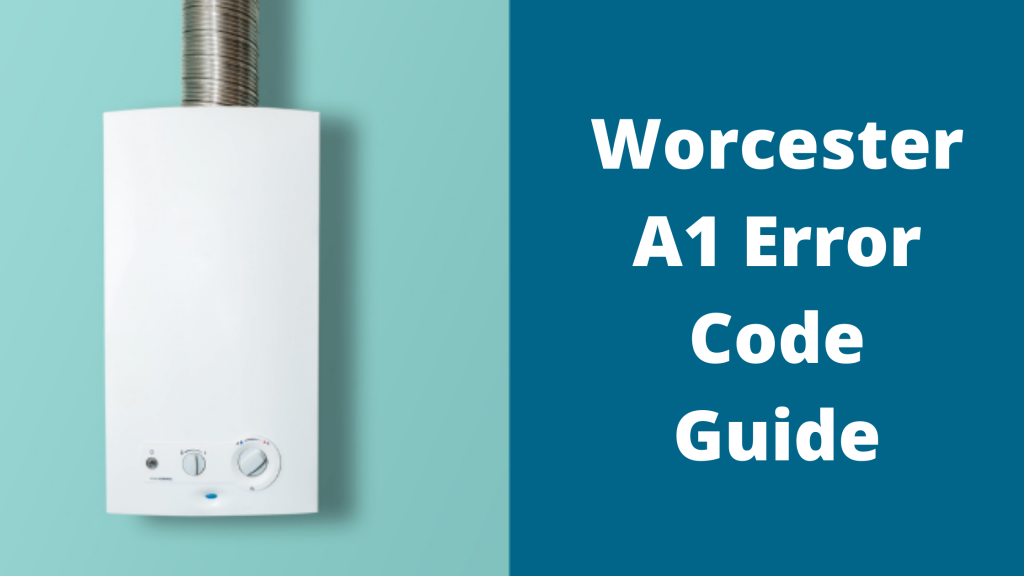 What Does the Worcester Boiler A1 Fault Mean?

A1 appears when the boiler’s pump is stuck, dry, or running with air in the system.

Worcester Bosch words the definition of this fault in a couple of different ways, so what you’ll see in your user manual will depend on the model you have.

However, it will always indicate an issue with the pump.

The pump is the component which circulates heated water from the boiler out into the heating system. It is either located inside the unit itself or close by, depending on the model and when it was installed.

If it isn’t running at full capacity, the speed and pressure of the water will be reduced, or may stop flowing entirely.

This means that by the time the A1 fault has appeared, you may already have experienced an interruption to the water flow from your taps, or your heating may have been behaving erratically.

What Causes the Worcester Boiler A1 Fault?

The bearings and shaft which allow the pump to rotate freely can become worn down over time, eventually leading to the part seizing or getting completely stuck in place.

You may have noticed a humming sound as the energy that would usually turn the pump sends vibrations through the system.

In older boilers this is a common consequence of wear and tear, and can affect either the bearings, the shaft, or both.

This wear and tear will happen much faster if the pump wasn’t installed correctly, as they need to be at an exact horizontal angle to function correctly.

Air Inside the Heating System

This is also referred to as ‘airlocked’, as air trapped inside the pump is capable of stopping it from circulating, just like a material blockage would.

If a significant amount of air has entered the system or the pump itself, it’s likely that this code has been accompanied by a loss of pressure.

You can check this by looking at the gauge on the front of your boiler, which shows a pressure reading in units called bars.

If it is below 1.2 bars, it won’t be running efficiently. All boilers will lose pressure over time, so unless a fault code has appeared this won’t usually indicate a wider issue.

You can reasonably expect to top up the pressure a couple of times a year, but if this is required much more frequently, or a significant drop happens suddenly, there’s likely to be a problem that needs to be addressed.

Air that can cause these drops can enter the system through a leaking part or pipe, but it can also build up in small amounts from the flow of water into the house, as well as when any works take place that have involved repressurising the system.

This is one of the reasons why it’s a good idea to keep on top of ‘bleeding’ your radiators, as this process drains air out of them before it can build up and cause a greater issue such as airlocking the pump.

If the heat in your radiators is spread unevenly, for example if they are cold at the top and warm at the bottom, this is a sign that air needs to be bled from them.

If the pump itself has become airlocked, you may have heard banging sounds coming from the boiler. If this issue is left untreated for too long, significant damage can be caused to the pump that won’t be fixed by simply removing the trapped air.

Pump is Blocked with Heating Sludge

Heating sludge is formed when tiny pieces of rust and debris are flaked off pipes as water runs through them. Eventually, these begin to collect together, turning into a thick mixture.

This can cause clogs in any part of the system, but is particularly problematic for components such as the pump which require freedom of movement.

This is most common in older heating systems or those which haven’t had a boiler filter installed. Heating sludge can be behind unusual noises too, ranging from a humming pump to scratching sounds as it travels through pipes.

How to Fix a Worcester Boiler A1 Fault

Unless stated, the fixes below will need to be done a Gas Safe registered engineer.

If the Pump is Stuck

If the bearings of the pump have worn down, it’s sometimes possible to replace these without changing the pump entirely.

These are small and cheap parts, so the main cost will be down to labour time. However, if the shaft is damaged it’s likely your engineer will suggest a total pump replacement.

This is because it’s often less cost effective to repair the shaft due to the cost and time involved, as well as the risk of running into the same issues down the line.

The cost of a new pump will vary per model, but you can expect to pay around £250.

An engineer will also be able to tell on sight whether the pump has been installed correctly or not.

They may be able to reinstall the same part at the proper angle if only minor repairs have been needed to the bearings, but again if significant damage has been done then a total replacement will be necessary.

DIY Fixes You Can Try First

While you may not be able to bleed the air from the pump itself, you can certainly try bleeding the radiators in your home before topping up the boiler’s pressure until the gauge shows more than 1.2 bar.

You’ll need a bleed key for this, which usually costs under £3 at DIY shops. Consult your boiler’s user manual to find out how to adjust the pressure, as the process will differ slightly depending on the type of filling loop you have.

If your pump is airlocked it’s always worth calling an engineer. Even though some pumps are external to the boiler and can legally be bled by the user, it might not be clear to you whether the part has sustained further damage that will require repair, or whether air has entered the system through a leak.

In these situations it’s usually most cost-effective in the long term to consult a professional.

If the Pump is Blocked with Heating Sludge

This type of blockage will be easy for an engineer to spot as the pump will be covered in sludge.

To fix the pump itself, they can remove it and clean it off. Provided that the bearings and shaft have sustained no damage, the same part can be safely replaced.

To remove heating sludge from the system, they will perform what is known as a flush. They may refer to this as a ‘power flush’ or a ‘hot flush’, which both use slightly different methods to the same end.

The flush involves sending water and specialist chemicals through the whole heating system to break down the sludge.

The cost for this process will vary depending on how many radiators you have, but a standard base price that includes the labour and materials is £300.

Some companies charge separately for the materials, so you may want to get a few quotes if you don’t have a regular engineer.

Once the system has been cleared, a magnetic filter can be fitted which will collect small bits of debris and prevent heating sludge from forming.

These generally cost under £100 and can be cleaned every time you have a boiler service, so they’re a good investment to avoid further repair costs.

If There is Air Inside the Heating System

Your engineer will be able to completely bleed and repressurise both the pump and heating system, but also search for any potential leaks where air may be entering.

Leaks may be obvious if you can see patches of water, or they may be coming from an internal component, or hidden in the house’s pipeworks .

The cost of repairing a leak will depend on its source, how long it takes to locate it, and whether any parts need to be replaced.

Which Worcester Models Use the A1 Fault?

Some of Worcester Bosch’s boilers will also show a three numbers after the fault code, which may be referred to as the ‘cause code’ or ‘error code’.

In some cases, the boiler is able to identify the source of the fault and can display a variety of cause codes to help an engineer diagnose the issue.

This isn’t the case with the A1 fault code, so you will always see the same three digits after it: 281.

Get Free Quotes to Fix Your Worcester A1 Error