While U9 is not technically a fault code, when it appears on your boiler’s display screen it does indicate underlying issues that need to be addressed.

Because it doesn’t appear in user manuals or the standard fault guide list, it can be quite difficult to find information on what it means.

Remember that all repairs should be done by a Gas Safe registered engineer.

This guide will help you to understand the U9 fault and what repairs your boiler may need when it appears. 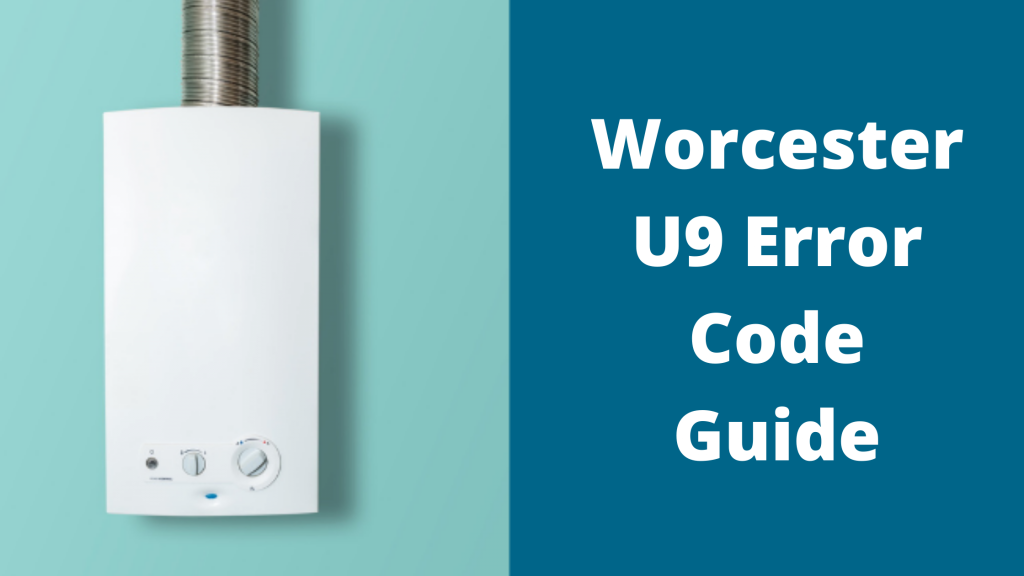 What Does the Worcester Bosch Fault Code U9 Mean?

When your boiler’s temperature exceeds 100°c, the letter ‘U’ will appear on the screen. The number following U indicates how many degrees beyond this it has reached. So in the case of U9, the boiler has reached 109°c.

U9 will often appear when your heating has successfully turned on but seems to switch itself back off again quickly. This happens when the unit overheats while running, and locks out as a safety measure to prevent further overheating.

You may notice the number after U decreasing from 9 as time passes, showing that the unit is cooling down.

What Causes the Worcester Bosch Fault Code U9?

Overheating is often the result of a blockage somewhere in your home’s heating system, which includes the radiators and pipes as well as the boiler unit itself.

The boiler produces the right amount of heat for the volume of water that should be flowing through the system at any one time.

When a blockage prevents the water from circulating appropriately, this heat may end up distributed to the boiler unit itself, risking damage to internal components.

Build-up of Limescale on the Heat Exchanger

The water that flows into your home contains minerals such as calcium and magnesium. Limescale is the name for the collection of the minerals that gets left behind when the water evaporates.

This is particularly common in areas with “hard” water, which means it has a high mineral content.

One indicator of limescale in the system is known as “kettling”, which is a whistling sound that resembles an old stove-top kettle.

Limescale can build up in any area of the heating system and cause circulation issues, but the area it frequently causes significant damage is the heat exchanger.

This is the part inside the boiler unit which heats the water using the heat produced by burning fuel. Limescale can not only block this part, but also cause it to crack.

These cracks are a common source of internal leaks which reduce the volume of water flowing through the area at which it’s heated.

This can lead to very hot water leaving the taps, as well as overheating within the unit.

Build-up of Limescale in the Flow Pipe

The flow pipe carries heated water away from your boiler, whereas the return pipe brings it back to be reheated.

Within the flow pipe there is a part called a thermistor (thermal-resistor) which takes resistance readings that are transmitted to the central hub of operations in the boiler, known as the printed circuit board (PCB).

These readings act as a measure of temperature, which signals to the PCB whether the system is running safely. This process is one of the stages that the PCB must confirm before permitting the next to take place.

When limescale builds up in the pipe around the thermistor, it can cause hotspots where the water has less space to flow through.

Temperature readings from these areas may be higher than other areas of the pipe, leading the PCB to act as if the whole system is running at this increased temperature.

In this instance, the U9 code wouldn’t be accurate as only one spot in the flow pipe has overheated, rather than the whole unit.

If your radiators have been heating up unevenly or not at all, it’s possible that excess air is in the system.

Air can enter as the water flows in, when repair work has taken place, or through the movement of the pump.

This can eventually prohibit water from flowing through the pipes freely.

The pump is responsible for pushing the heated water away from the boiler into the pipes.

Any issue with its functioning can stop hot water leaving the unit, leading to overheating.

You may have heard strange sounds coming from your unit as the pump attempts to spin but is unable to.

It can become blocked with air or heating sludge, a mixture of rust and debris that flakes off the pipes and eventually collects together.

This can clog up the pump’s moving parts, these can also break down due to age.

If you have recently had your boiler fitted or repaired, the pump may have been installed incorrectly or at the wrong speed setting.

If there’s no blockage, it’s possible that the thermistor in the flow pipe is giving faulty temperature readings or no readings at all.

The part can stop working due to age or another malfunction.

Can I Fix My Own Worcester Bosch Boiler With the U9 Fault Code?

As an overheating boiler can be dangerous, most diagnosis and repair works will require a visit from a registered Gas Safe engineer.

However, you can check your radiators to see if they’re heating up consistently, as trapped air that’s not inside the boiler unit can often be fixed on a DIY basis.

If there is an air blockage, you can safely bleed your radiators to see if it fixes the problem, which is a process that allows air to leave the radiators and water to flow freely again.

For this you will need a radiator key, which can be picked up at most DIY shops for a few pounds. It’s worth learning how to do this as regular bleeding can help keep your heating system running smoothly.

How to Fix a Worcester Boiler U9 Error

If bleeding your radiators hasn’t fixed the issue, you’ll need to call an engineer.

It can be helpful to note down any useful information for them, such as when U9 appears in the heating process and if you’ve noticed any kettling or other unusual sounds.

If this issue is caught early, an engineer may be able to clear the limescale without needing to replace the heat exchanger.

This is done with a flush, which involves sending specialist chemicals throughout the heating system to break down limescale.

The cost for this service is dependent on how many radiators you have in the household, which determines the amount of chemicals and time needed.

If the heat exchanger has sustained significant damage or cracked, it will likely need to be replaced. This is one of the more expensive parts, and depending on your boiler’s model can cost up to £500.

As this may have also caused a leak, the rest of the boiler will need to be inspected to ensure other parts don’t need repair or replacement due to moisture damage.

To prevent further problems, a filter can be fitted to collect residue in the water as it flows through. This is particularly important in hard water areas where limescale issues are most common.

This can usually be cleared with a flush, but may require a replacement thermistor if it has been damaged by the limescale.

In some cases the section of pipe itself may need to be replaced.

If There is a Fault With the Pump

Checking the speed setting and installation of the pump is a quick process, and either of these issues can be remedied without a replacement part.

Air blockages can also be bled out quickly, but removing heating sludge is a more costly and time consuming procedure.

As with limescale, a flush is sent through the system to break down the sludge, but different chemicals are used. The cost depends on the number of radiators in the house.

A magnetic filter should be fitted to prevent future build-ups, but your engineer may also recommend a flush with each boiler service.

If There is a Fault With the Thermistor

To check the thermistor’s functioning, your engineer will use a tool called a multimeter which takes resistance readings.

A thermistor giving incorrect readings, or none at all, will need to be replaced.

Unless there are other complications this is usually simple to do, and the part generally costs around ten pounds.

Which Worcester Bosch Models Use the U9 Fault Code?

Whichever type of Worcester Bosch boiler you have, U9 will always indicate that the boiler unit has reached 109°c. This is the case whether you have a conventional, system, or combi boiler.

Get Free Quotes to Fix Your Worcester U9 Error