If these have appeared on your Worcester Bosch, the unit has detected a potentially dangerous issue and ‘locked out’ as a safety measure. This means it will not run again until the cause has been addressed.

As this code can indicate a gas issue, the EA fault code will often require a visit from an engineer. However, there are a few things you can try at home before calling someone out.

This guide will help you to understand what causes the code to appear, and what your next steps may be to get your boiler running again. 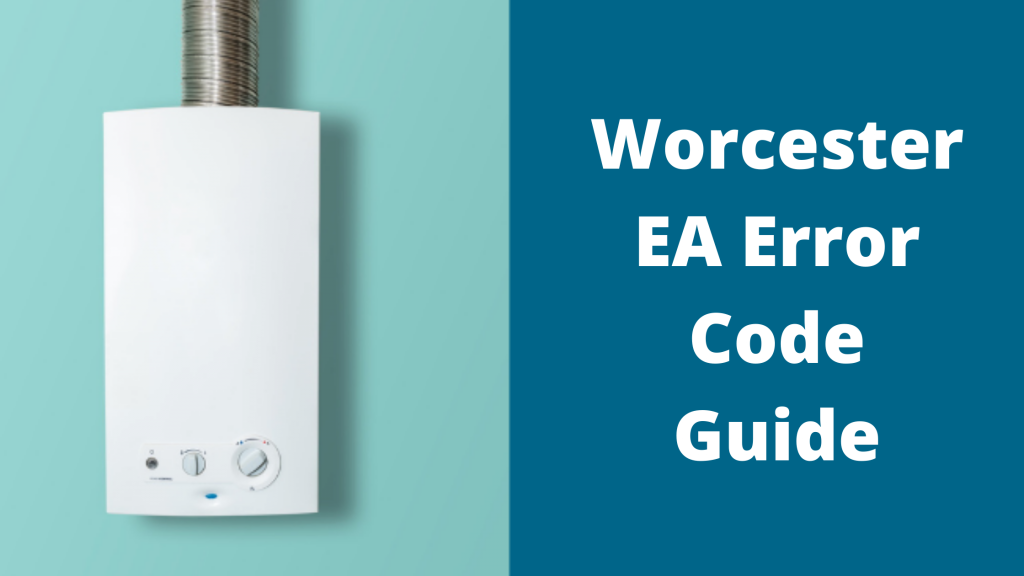 What Does the Worcester EA Fault Code Mean?

Worcester Bosch gives the definition of the EA fault code as ‘Flame Detection Error’ in their manuals. This refers to the flame that lights within your boiler unit to heat the water.

The heating process of your boiler is controlled by a component called the printed circuit board (PCB). In order for each stage to take place, the PCB needs to have received a signal that the previous step has taken place successfully.

In the instance of the EA fault code, the PCB has not been able to confirm that a flame has been lit, or remains so. This causes the PCB to lock out in order to prevent damage to the unit’s components or external risks.

For example, if gas is freely flowing into the unit without being lit, this could lead to potentially dangerous leaks if the supply isn’t shut off.

No Gas Supply to Boiler

Your boiler requires gas to flow freely into the unit which it can light. You can check whether gas is coming into your home by turning on other appliances that use it, such as a cooker.

If the gas is on but none is coming into your property, you may have run out of credit on your prepaid gas meter, or there may be local works affecting the supply.

If your other appliances are receiving gas, the issue may be with the valve that controls flow into the boiler itself. This valve can become stuck in the wrong position, allowing too little or too much gas to enter.

The regulator is a part of the meter which ensures that the correct amount of gas enters your property, and is usually located outdoors.

In cold weather it can become frozen in place, stopping it from taking accurate readings and allowing enough gas to flow.

The condensing technology in your boiler involves rapidly cooling down the flue pipe, which in turn creates a lot of waste water that cannot be reused.

As this water is toxic, it needs to flow out of your home just as the excess gases do through the flue pipe. This happens through the ‘condensate pipe’, which you can identify as the only plastic pipe that comes out of your boiler.

In very cold weather, it’s not uncommon for the pipe to become frozen where it leaves your house, usually from the wall closest to the boiler.

Eventually this can become backed up to the unit and even prevent a flame from lighting, as with the EA fault code.

This is the part where the gas enters the boiler and is lit. It has a very small entrance which can occasionally become blocked with debris, preventing gas from flowing freely.

Ignition Lead or Electrode is Faulty

These components are responsible for creating the spark which lights the gas. The most common issue that affects their functioning is moisture damage, which can indicate a leak within the unit.

This sensor is the part that sends a signal to the PCB to confirm a flame has been lit. It can become faulty due to exposure to moisture, or components such as the insulator can become cracked.

Any issue with the PCB can cause it to incorrectly read or send signals between the other components, such as the flame sensor.

Water damage from an internal leak is a common culprit for damage to the PCB, which can range from a single connection to the whole circuit board.

Can I Fix My Own Worcester Boiler With the EA Fault Code?

As this fault code is likely to relate to a gas issue, you cannot legally and safely attempt to fix the boiler on a DIY basis, unless you are a registered Gas Safe engineer.

You should not reset your boiler without knowing the cause of the problem, as this may cause damage to its components.

However, there are a few things you can safely check outside of the unit before calling an engineer.

If there is no gas supply to the boiler

To ensure that gas is coming into your property, you can do the following:

If the condensate pipe is blocked:

If you can see that the plastic pipe leaving your house has a clear blockage of ice, or appears frosty on the outside, you may be able to defrost it yourself if it’s accessible. There are two methods you can try:

Then reset your boiler by pressing the reset button on the unit for five seconds.

How to Fix an EA Fault Code

If There is No Gas Supply to the Boiler

An engineer will be able to determine where the gas supply issue originates. If they identify that the boiler’s gas valve is stuck, they may be able to adjust it without replacement.

If the valve needs to be replaced entirely, this can cost around £300 including a day’s labour and parts.

If the Gas Meter Regulator is Frozen

After defrosting the part, an engineer is likely to suggest insulating the meter to prevent future freezing.

This may involve boxing it in and/or adding insulating material around it, which they might refer to as ‘lagging’. This is usually an inexpensive procedure, depending on the labour required.

If The Condensate Pipe is Blocked

If you aren’t able to defrost the pipe yourself due to the accessibility of the blockage or pipe exit, an engineer will be able to do so.

If the pipe was not previously insulated, they may suggest adding extra material around it to protect it from future cold weather.

This material isn’t expensive, but the labour costs associated with this issue will depend on how long it takes to find a blockage and access the pipe.

If the Pilot Jet is Blocked

This is usually a simple fix, as an engineer will likely be able to clean the jet and replace it without needing a new part.

If The Ignition Lead or Electrode is Faulty

If either of these parts needs to be replaced, it can cost a couple of hundred pounds, depending on the model of your boiler.

If they have been damaged by moisture, your engineer will also want to check for an internal leak that may require further replacements.

If The Flame Sensor is Faulty

A dirty or cracked flame sensor will likely need to be replaced. Fortunately, this is one of the cheaper parts, usually costing less than £50.

If The PCB is Faulty

An engineer may be able to repair a PCB if there has been minimal damage, though often a replacement will be needed.

This is usually the most expensive boiler part, with £500 not being an uncommon price. If a leak has caused the damage, the engineer will also need to diagnose where it is coming from and repair or replace the leaking parts.

Which Worcester Models Use the EA Fault Code?

While Worcester uses a huge variety of fault codes across their range of boilers, each code is only used once so any time you see the EA code it will indicate a flame detection issue. Popular models that use the EA code include:

Some models use a variation of the EA code, with an additional number. These may indicate a flame detection issue but can also have other meanings. For example on boilers that use ‘EA 227’, the code can also mean that the flame signal was lost while the boiler was in operation.

Get Free Quotes to Fix Your Worcester EA Error