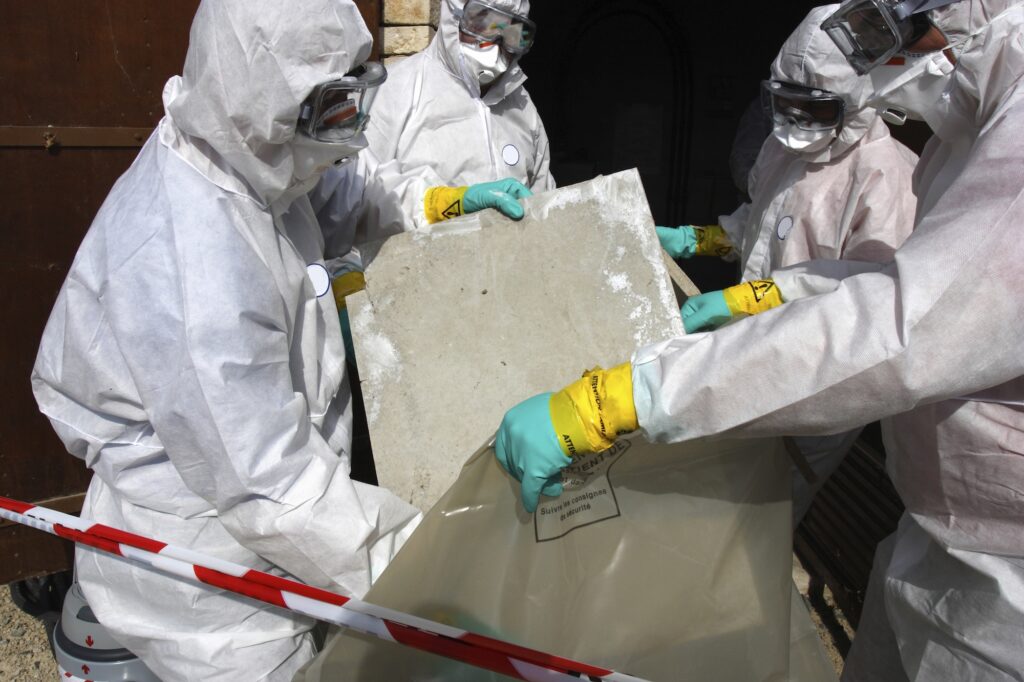 Unfortunately asbestos is much more common in the UK than we’d like.

it was not until the 1980s that research began to emerge detailing the severe health risks use of asbestos poses to humans. In 1999, it was confirmed as highly dangerous and banned in the UK.

If your home was built before 1999, especially in the period following 1930, it is very likely that there are asbestos materials in your home.

It was most commonly employed in roofing, insulation, walls, flooring and piping. The substance is only dangerous if it’s in poor condition, broken or damaged.

The risk comes from the releasing of tiny asbestos fibres into the air, which can then enter into your lungs and cause health problems. Well-preserved asbestos does not pose a threat.

The health risks involved with asbestos are fairly severe and so it’s best to deal with the problem as soon as possible, rather than wait for it to deteriorate.

This article will cover what you can expect to pay to remove asbestos and common questions associated with the removal of asbestos. 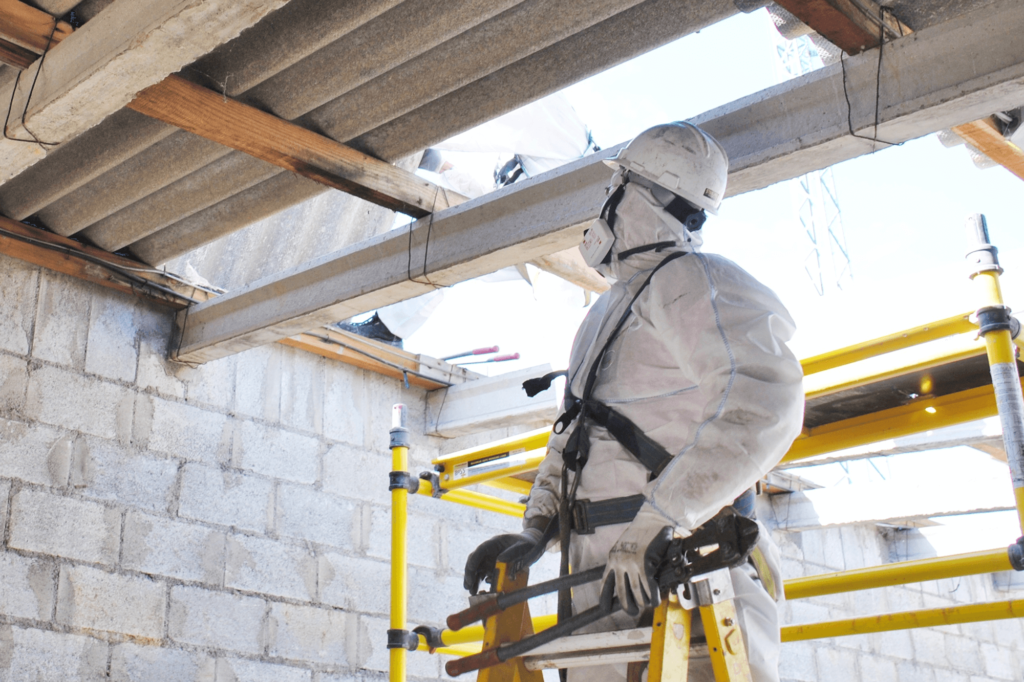 There are two types of asbestos treatment, both of which have their own pros and cons.

However, before you look at asbestos removal, it is important to first identify the problem correctly. This involves hiring a professional asbestos surveyor to correctly assess the type, quantity and risks of asbestos, before providing a recommended means of treatment.

In order to perform an accurate survey, samples of the material must be sent to a laboratory for testing, which is why the test can be costly.

The average price for an asbestos survey is £250, including materials, but it can be more depending on the size of the property and how difficult it is to access the affected area.

The survey lasts around 2 or 3 hours and afterwards, you will receive a report detailing the situation.

When it comes to treating asbestos, there are two options: encapsulation and removal.

This method costs around £8 per m² and involves applying a protective coating to the asbestos materials, which will remove the risk of harmful dust escaping.

This is recommended for asbestos that is in good condition as it is cost-effective and avoids having to remove the asbestos, which can be dangerous particularly with regards to disposal.

Once asbestos has been fully encapsulated, it can be safely painted over or covered.

This method involves the removal of asbestos by fully-licensed professionals.

It costs on average £50 per m², however it is the only way to completely remove the health risks associated with asbestos.

In addition, if you are looking to sell your home, removing asbestos can increase its value as even homes that have fully encapsulated any asbestos can be difficult to sell.

The cost will vary and removing asbestos also requires a special asbestos skip so that the material be properly disposed of, which may or may not be included in the contractor’s price.

The extremely hazardous nature of this substance makes it subject to strict laws with regards to disposal, hence the much higher cost compared to encapsulation.

Dealing with asbestos can incur further costs, which involve re-boarding after the fact.

If you have encapsulated the asbestos, you may want to cover it with boards and if you have had the asbestos removed, you will almost definitely have gaps that need re-boarding, plastering and decorating.

Basic re-boarding starts at around £400 and it’s important to factor in this cost when you’re looking at dealing with asbestos. 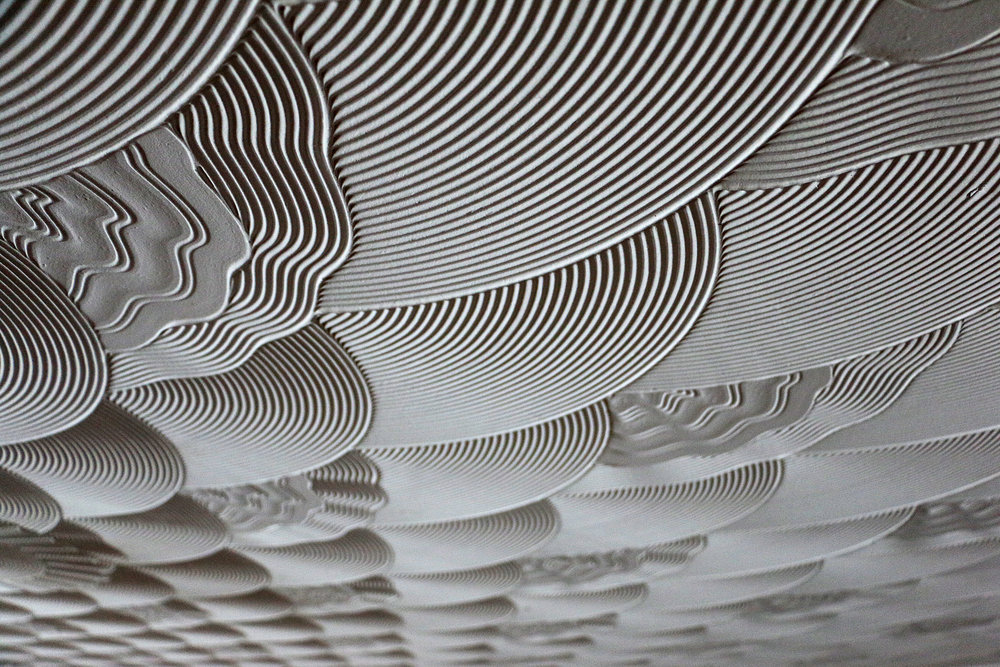 Artex ceilings became popular in the 60s and 70s due to a shortage of plaster. Artex is a type of slow-drying paint that is strengthened by asbestos and you can recognise an Artex ceiling by its repeating patterned texture.

If you’re unsure, scratch a little of the dried coating off and if underneath the surface is coloured orange, brown or grey, that indicates plaster whereas white will indicate the use of Artex.

Removing an Artex ceiling costs about £100 per m², so about £2000 for a standard 20m² ceiling. The work will take a couple of days. Again, it’s important to get professional advice as disposing of an Artex ceiling is also regulated.

Artex ceilings are not dangerous unless they are damaged or broken, causing harmful asbestos particles to be released. Nevertheless, they are considered dated and can often make a house decline in value.

It’s possible to remove Artex using a water-based chemical gel, which dissolves the Artex and allows you to scrape it off the plasterboard with minimal damage to the ceiling.

Make sure to keep the gel wet at all times to prevent dry dust floating into the room. The waste will also need to be taken to a registered site, as it is still hazardous. Artex can also be removed using a steamer to moisten it before scraping it off.

However, probably the easiest way to deal with an Artex ceiling is by plastering over it, rather than removing it. If you choose to go with this option, it is imperative to have a survey carried out to make sure that plastering poses no risk in damaging the asbestos.

If you decide not to remove the Artex, make sure to inform any future owners of your home about the presence of asbestos in case they want to perform any work on the ceiling. 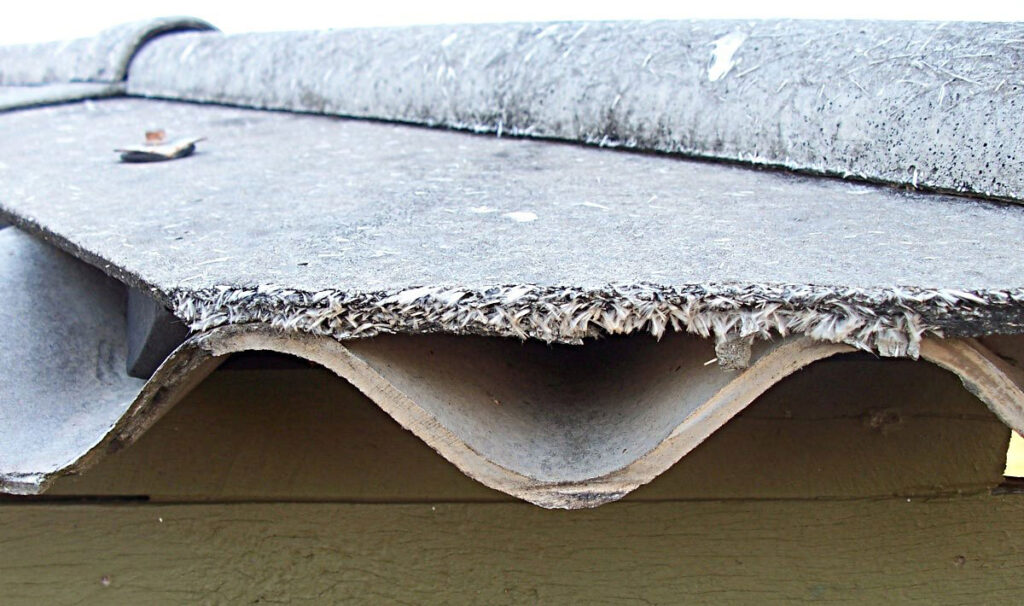 It is very common to find asbestos materials in a garage, particularly in the roof. Unfortunately, this can be very costly to remove, ranging from £380 to over £2,000.

The price will depend on the size of the roof and which sections need to be removed. Removing a single garage asbestos roof starts at £380 or £680 including the sides.

A double garage roof will cost closer to £750, or £1800 including the sides. Removing insulation ceiling boards in your garage starts at £1350.

The asbestos cement used in garage roofs doesn’t pose a risk if it is in good condition. However, it will naturally deteriorate over time and the more cracks that appear, the higher the risk of harmful particles escaping. 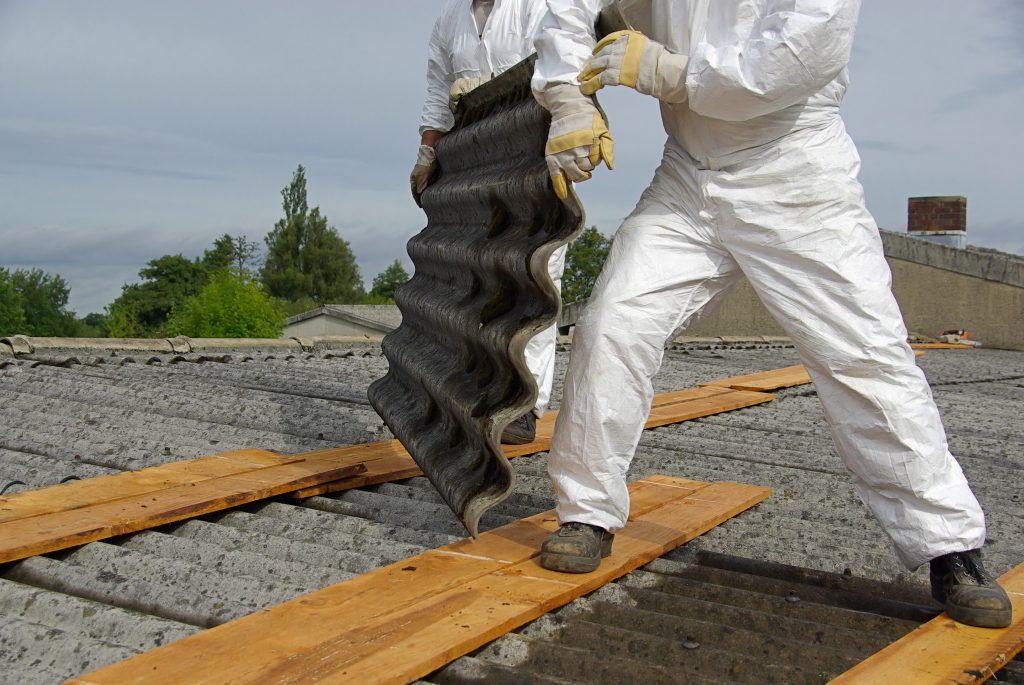 One of the most common images people associate with asbestos is the corrugated asbestos sheeting often used as roof material.

However, there are many different asbestos roof tiles that have been used to cover homes in the UK.

This is why, if you suspect the presence of asbestos in your roof, it is essential to consult a specialist, particularly if your property has an old roof made of concrete tiles.

Chrysotile, also known as white asbestos, has long been used to strengthen cement and was particularly popular in roofing as it is incredibly durable, insular and noise-reducing.

Asbestos roof removal is not something to be undertaken lightly as the average price is £2,500 and the work will take about 3 weeks.

Since the asbestos fibres are normally found within the cement itself (with a ratio of about 85% cement to 15% asbestos), an asbestos roof is only dangerous when damaged or deteriorated.

That being said, any heavy-duty work undertaken on your roof (such as drilling, cutting or abrasive cleaning) can cause harmful dust to be released.

Are There Any Grants for Asbestos Removal?

Many local councils in the UK do offer financial help when it comes to the removal of asbestos so it’s definitely worth doing some research.

If your local council does not offer a grant, they may well have their own asbestos removal service, which will be much cheaper than a commercial company and some will even remove small amounts for free.

Always make sure to obtain several quotes before going ahead with such a big, pricey job.

How to Identify Asbestos

As previously mentioned, you are likely to have asbestos materials in your home if it was built between 1930 and 1999, and/or if you have an Artex ceiling.

In this case, hire a professional asbestos surveyor or to confirm or deny its presence in your home.

There are three main types of asbestos:

Chrysotile (white asbestos) is the most commonly used type of asbestos. It is grey or white in colour and has a durable, malleable structure. It was mostly used in the UK in garages, roofing materials and cement.

Amosite (brown asbestos) has a thicker, more coarse structure and is brown in colour. It is less common than chrysolite and was mostly used in asbestos insulation boards (AIBs). Due to its incredibly hazardous nature, Amosite was banned in the UK in 1980.

Crocidolite (blue asbestos) is very rare in the UK and is recognisable by its small, pointed fibres which cause punctures in the lining of the lung, making it the most harmful type of asbestos. It was commonly used in insulation in South Africa.

Can you Remove Asbestos Yourself? 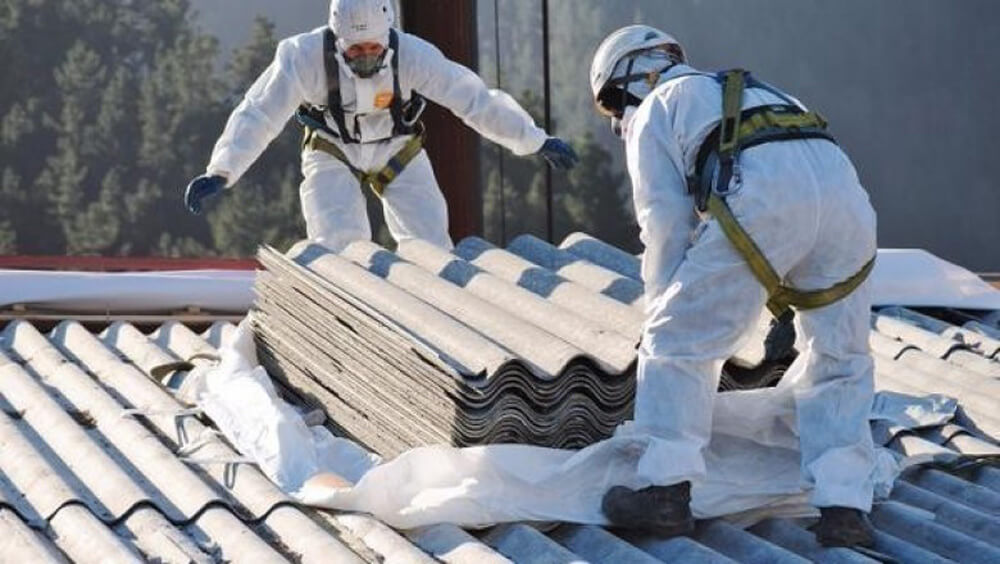 In a word, no. Asbestos removal poses life-threatening risks to your health and that of your family. In addition, although removing asbestos using DIY methods is not illegal, disposing of asbestos is.

The unsafe removal of asbestos can cause harmful dust to be released into the surrounding air.

The reason asbestos removal is so expensive is that it is a high-risk job that should only be undertaken by trained professionals. Full safety gear is required, as well as a series of accreditations.

Only hire workmen to survey and remove asbestos if they have the following certificates:

Make sure the samples from your survey are sent to a UKAS accredited laboratory to be analysed, too, and that everyone involved in carrying out the work has these certifications, not just the company.

Don’t be afraid to ask for proof; the incorrect removal and disposal of asbestos can endanger your life, that of your family and the people in your surrounding area.

When asbestos fibres enter into our lungs, they irritate them to the point of causing damage to the tissue. This damage often leads to serious illness, from breathing problems to chronic respiratory diseases and lung cancer.

Damage caused by exposure to asbestos currently has no cure and causes 5,000 annual deaths in the UK.

How Long after Asbestos is Removed is it Safe?

Once asbestos has been removed from your home, there must be an abatement period of at least 48 hours after which an air test is carried out. Only once the quality of the air is at 0.01 fibres per cm³ or lower is the area safe again.

Get Prices on Asbestos Removal Near You

We’ve done our best to give you a good idea of what you can expect to pay to remove asbestos.

We work with all the best asbestos removal specialists ready to price your job. Get free, no-obligation quotes in your local area and compare prices using the form below.