Bamboo is one of the fastest-growing, strongest plants in the world. There are around 1,500 species of bamboo, and some can grow up to a metre in just one day.

Despite not having the fearsome reputation as Japanese knotweed, bamboo can pose a serious problem to homes in the UK.

Bamboo is an attractive, easy-to-grow plant, but it can spread with devastating consequences if it’s left to its own devices.

This article will review how much it costs to remove, factors that affect the cost and other common questions surrounding the removal of bamboo. 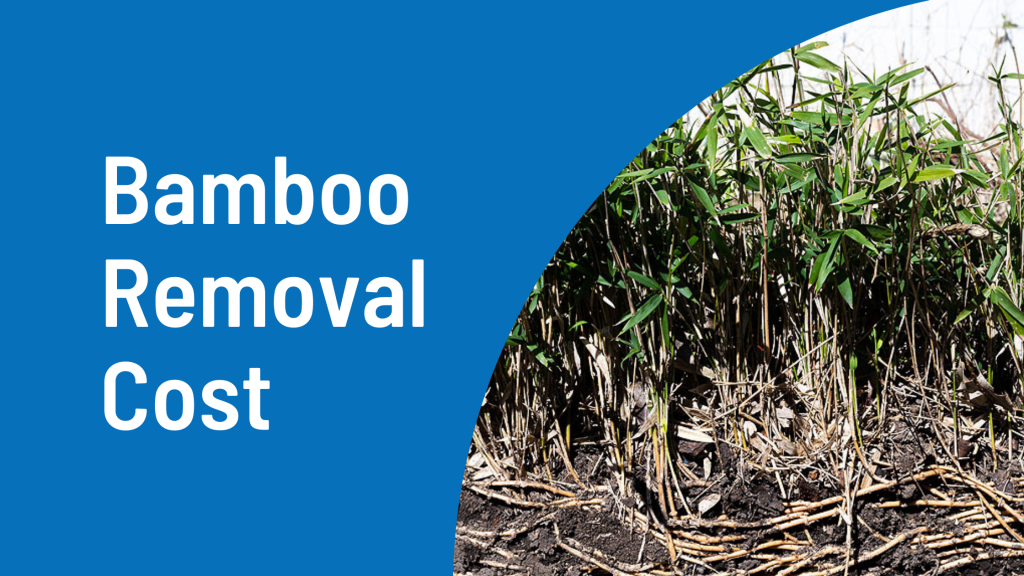 We collected the following average costs of bamboo removal from 7 primary sources and 5 secondary sources.

Prices are for small to medium-sized projects, such as a standard-sized garden with a single bamboo problem, and for large projects, e.g. multiple bamboo clumps in a larger garden or space.

For smaller projects, a gardener or landscape may be to price a job per hour, usually in the region of £20 – £40. Generally, this will mean a cost of £150 to £250 or so. This includes a half a day or a day rate and the cost of herbicide.

Specialist companies for larger projects will likely charge more and have a minimum cost. Expect this to be a minimum of £500.

Other Factors That Affect the Cost

If the bamboo needs to be cut down, heavy machinery such as a stump grinder will need to be transported. The contractor will need to account for extra labour costs to remove this machinery.

Obstructions such as pipes, concrete and wiring can also cause delays and thus, increase labour costs.

Labour costs in London and the south of England are generally more expensive than elsewhere.

If it is a small job and you’re using general gardener or lanscaper, you should be able to find a local tradesperson without too much difficulty. However, if a contractor needs to travel beyond a certain radius, then they may add an extra fee on top.

Specialist bamboo contractors may be harder to come by if you live in more rural areas and may need to travel further afield, thus increasing costs.

How To Choose a Bamboo Remover

Most companies that remove Japanese knotweed will also remove bamboo as the processes are fairly similar. Tree surgeons and tree removal experts may also deal with bamboo removal.

Bamboo removal depends on whether it’s a running or clumping variety. Clumping varieties are easier to kill by digging and herbicide treatment (typically glyphosate herbicide). Some specialists will provide a guarantee on their services, essentially stating that you’ll get your money back if you notice regrowth within a certain timeframe.

Smaller bamboo removal tasks (e.g. clumping bamboo) can be handled by a gardener or hortirocularist, whereas larger problems involving neighbour’s property or other structures should be handled by a specialist.

Running varieties will usually have to be excavated in sections. The remover will excavate the ‘runners’ under the ground, cut them, and then destroy each component of the plant separately.

Removal specialists might also use a stump remover to dig out the roots and rhizome.

Exceptionally complex jobs, e.g. where the bamboo has already encroached on a property, can cost much more. If bamboo has pierced foundations, driveways, walls, etc., you’ll need to factor in extra building costs.

In rare circumstances, bamboo removal can cost upwards of £10,000. This is why it’s crucial to remove bamboo before it encroaches onto property.

Why Is Bamboo a Problem?

Bamboo is often planted in gardens for its fast-growing and aesthetic qualities and it’s also valued for its ability to create natural screens in gardens, enhancing their privacy.

Despite its luscious low-maintenance foliage, bamboo is a powerful, fast-growing plant that can easily penetrate hard surfaces like walls and driveways.

While we tend to think of bamboo as growing upwards, some varieties of bamboo have fast-growing running root systems called rhizomes which grow horizontally under the ground. It’s these root systems that tend to cause damage.

Moreover, unlike Japanese knotweed, bamboo is not classed as an invasive species under the Wildlife and Countryside Act 1981. That means that anyone can plant any and all varieties legally.

There has been a sharp rise in legal disputes arising from bamboo. Solicitors and law firms report securing large sums from offenders where someone’s property has been damaged by bamboo.

The law surrounding bamboo is complex as it’s not legally defined as an invasive plant, but that doesn’t mean that homeowners aren’t liable for damages if they fail to control their bamboo.

“I have acted for a number of clients who have taken legal action against their neighbour for nuisance caused as a result of a bamboo infestation where the offending party has had to pay significant removal costs and legal bills. Due to the increase in nuisance claims it is something that the mortgage companies are closely looking at and I wouldn’t be surprised to see them imposing lending restrictions on properties that suffer with bamboo infestations in the future.”

As such, any potentially risky bamboo problems should be taken seriously. Moving or removing the plant before it has a chance to spread is the best cause of action.

Bamboo is not as destructive as Japanese knotweed, but it’s still capable of causing serious damage to homes. Bamboo is none other than the world’s fastest-growing plant and not everyone is aware of how you keep it under control.

However, some varieties of bamboo are much worse than others  – it depends on whether the variety is ‘running’ or ‘clumping’.

Clumping species of bamboo are easier to confine and typically grow upwards in a clump. They have shorter root systems, or rhizomes, and generally don’t spread horizontally.

Clumping bamboo is less likely to pose a problem than running bamboo, but it should still be kept well away from garden walls, houses or other structures.

Running bamboo has a much stronger, larger root system or rhizome which travels horizontally under the ground. As such, it’s capable of spreading underground covertly and has been known to pop up several metres away from where it was planted.

How Do I Know If I Have Running Bamboo or Clumping Bamboo?

A gardener or horticulturist should be able to tell running and clumping varieties apart by looking at the ridge that runs around the outside of the stem and the direction of new growth emanating from the stem.

Also, if you’ve seen your bamboo sprout new stems some distance from the central clump, you’ve probably got a running variety. If you excavate a short distance under the earth, you should also be able to find the horizontal stems of running bamboo.

If you know what your bamboo plant is called, then Bambusa or Dendrocalamus are two popular clumping varieties. Sinobambusa, Phyllostachys, Sasa, Pseudosasa and Sinobambusa are running varieties.

When To Consider Bamboo Removal

Bamboo looks delightful at first, but it might dawn on you that you’ve just moved into a home with a bamboo problem.

Some gardens are literally covered in bamboo, and once you allow it to spread, it can be very tough to control. If your garden is full of bamboo, then you should ask a gardener or horticulturist to take a look at it as soon as possible.

If you’re growing bamboo many metres away from a property or structure, there’s little cause to worry. While a running variety could still feasibly spread, it should be easy enough to keep under control.

However, if you’re growing bamboo in the ground close to a neighbour’s property, wall, or other structure, you should keep a close eye on it.

This is when encroachment is most likely, and you might not even realise that your bamboo is encroaching until it bursts through the wall.

If you’ve noticed bamboo spreading rapidly in your garden, you should consider removing it.

This likely means it’s a running variety, and it could rapidly spread across many metres in just a year or two. Even if the bamboo doesn’t pose a risk to property, it can ruin your garden.

Get Prices on Bamboo Removal Near You

We’ve done our best to give you a good idea of what you can expect to pay to remove bamboo.

We work with all the best bamboo removal specialists ready to price your job. Get free, no-obligation quotes in your local area and compare prices using the form below.