Blu Tack is a quick and easy way to display hang light wall decorations such as posters and prints, but it can sometimes leave a stain. Light-coloured walls and wallpapers are a particular problem when it comes to Blu Tack stains after you have removed your posters.

The stains left by Blu Tack are, thankfully, not blue but look like a general oil stain. There are, however, ways to remove stains if you do not want to completely redecorate.

If you are renting a property or you are a student in halls, for example, you will want to ensure that you don’t leave any stains on the walls as you may have to pay for the damage.

For homeowners, while painting over stains is sometimes an option it is best to know the best ways to remove Blu Tack stains to save you time and money. 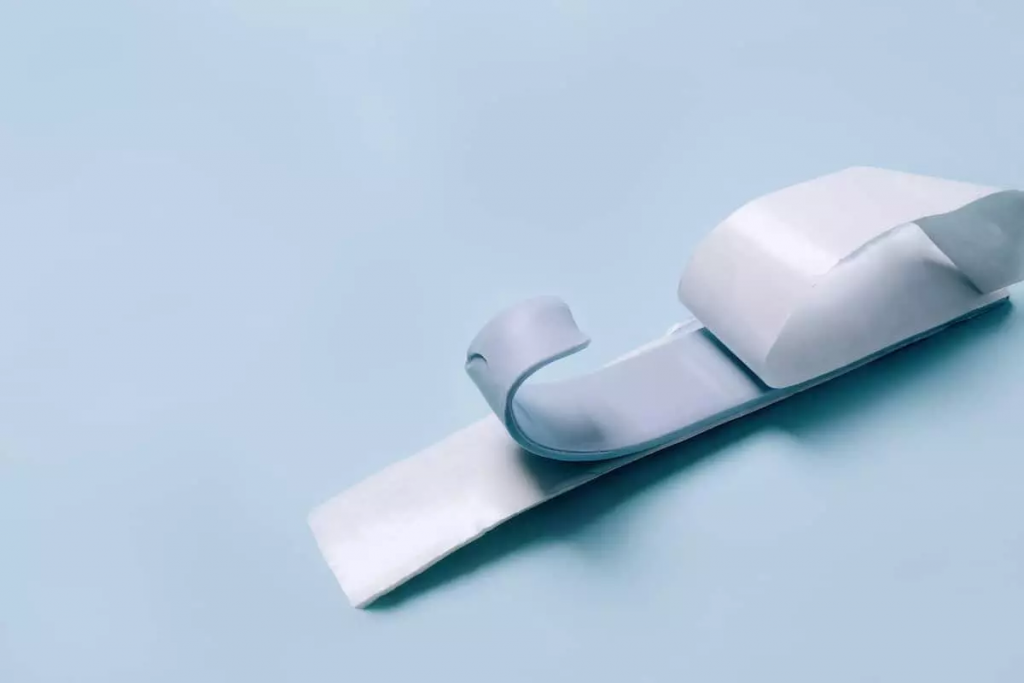 Why Does Blu Tack Leave Stains?

Blu Tack contains oils and other ingredients that help form the adhesive to make it sticky which means it is best used on non-porous surfaces, such as good quality wallpaper and paints (Bostik).

If you use cheaper paints and wallpapers you are likely to experience issues with stains, especially if the adhesive has been on the wall for a long period.

Generally, the stains do not cause too much of a problem and there are different ways to remove the stain, depending on whether it is on wallpaper or paint.

It is important to follow the correct instructions for removing Blu Tack depending on the wall surface so that you do not risk damaging wallpaper. Once the Blu Tack is removed from the wall you can then work on removing the stain if, indeed, it has left a mark.

You will need to make sure that you have the correct tools at hand when starting to remove Blu Tack stains from your wall. If you are not prepared you may be tempted to simply try your best and with what you have and end up ruining the wall.

For effective removal of Blu Tack and Blu Tack stains you will require the following:

Removing Blu Tack and Blu Tack stains from your wallpaper can be challenging. The last thing that you want is to tear your wallpaper or rub away the pattern of the paper.

The gentle way to take Blu Tack off wallpaper is to softly roll your fingers over the area to collect as much of the blu tack as you can, similar to how you would remove sticky substances from your hands.

You can also try to keep a small bit of Blu Tack on your finger and run it over the Blu Tack stuck to the wall to see if it attaches to the bit in your hand.

If using your finger is tricky you can roll a small ball of Blu Tack and lightly dab on the area where the Blu Tack is being stubborn. You should take extra care if the Blu Tack has been on the wallpaper for a long period as it does get stickier over time.

While Blu Tack is generally easier to remove from painted walls than from wallpaper you still need to take care not to peel off the paint. If you take off the Blu Tack too roughly you risk-taking pieces of paint with it, especially if the walls are damp.

Follow the same methods of rolling or dabbing the Blu Tack from the wall but if it is being stubborn you will need to look at other options. It is best to take your time with the removal process as it will preserve your walls and, as a bonus, you are able to reuse the Blu Tack.

Other Ways to Remove Blu Tack

If you have tried the dabbing and rolling method and you are still unable to remove Blu Tack you can try the following:

Once the Blu Tack has been removed from the wall you can see if it has left a stain behind. You may be lucky that there is no stain at all and this is likely to depend on the colour and texture of your wall.

Erasing Blu Tack stains takes more time than actually removing the adhesive itself so you will need patience. The stain that is left behind after removing Blu Tack is an oily residue behind where the adhesive was pressed into the wall.

For oily stains, Stain Removal 101 advise that citrus-based cleaning solutions work best as they can break down the grease. Using a homemade citrus-based solution is also better for the environment and is not hazardous.

Like many shop-bought cleaners that can be flammable. See how you can remove Blu Tack stains in these easy steps

You can buy numerous stain removal sprays, chewing gum removers and ‘sticky stuff’ removers from supermarkets and hardware stores but you can make a simple solution at home.

Making your stain removal spray is easy and you can ensure that the use of chemicals is kept to a minimum.

This citrus-based solution can be used for cleaning other areas of the house and is particularly good in the bathroom but you will need to test a small area and be careful on certain materials, such as wood.

For your homemade citrus-based stain remover you will need:

Simple add the lemon and vinegar to the spray bottle, top with water and shake before use. If you are making the solution in advance you can also add the rind of the lemon to the bottle for a more intense smell.

You will only need a small amount of spray for removing the Blu Tack from your wall but you can store the remainder and use it on other household stains.

As the spray does not contain a lot of chemicals it is not very strong but should help you remove the oily Blu Tack stain from your wall.

If you find that you cannot fully remove Blu Tack stains from your wall you will need to look at how you can cover the stain. You will still need to make sure that you have removed the blob of Blu Tack from the wall before painting over or adding a new poster or covering.

If you do paint over the stain you will likely need to paint the whole wall, especially if it has been a while since the wall was originally painted.

Before repainting your wall you will need to clean off as much as the Blu Tack stain as possible and use sandpaper to smooth off the remainder of the stain. This will ensure that the oil stain does not seep through your new layer of paint.

If you cannot get a stain off wallpaper you may be able to add a new strip if you have leftovers from when you decorated or you may need to buy a new batch.

The quickest and easiest way to cover stubborn Blu Tack stains on wallpaper is to cover with pictures, photographs or a corkboard. This is the cheapest and easiest method until you are fully decorating again.

While some Blu Tack stains are easy to remove others are tricker. If you know that the paint or wallpaper on your walls is not the best quality it may be better to avoid Blue Tack and use pins or nails instead.

In general, Blu Tack is better used on paint than wallpaper unless the wallpaper is thick and has a smooth texture or vinyl finish.

If you have light-coloured walls you can get white coloured adhesive, which may still leave oil stains, the stain may not be as obvious.

Glass and metal surfaces are also good for Blue Tack so you could look around your room to see if there are alternatives to putting it on paint and wallpaper.

If you know that your wall surface is vulnerable to stains use fresh Blu Tack rather than an older blob—you can use older Blu Tack on a pinboard, fridges, or other smooth surfaces. Older Blu Tack can become very sticky so there is more chance of damaging walls.

To clarify, if you need to use Blu Tack to hang art, photography is a quick and easy way to do so. If you are using Blu Tack it is best to apply to smooth surfaces or good quality wallpaper and use a fresh pack.

When removing Blu Tack make sure you dab or roll with either your finger or a clean cloth. If there is a stain where the Blu Tack has been, you can use a ‘sticky stuff’ remover or a citrus-based remove to spray the area before dabbing with a cloth and leaving to dry.

Remember to test a discreet area of the wall before using any products so as not to risk causing further damage to your walls.