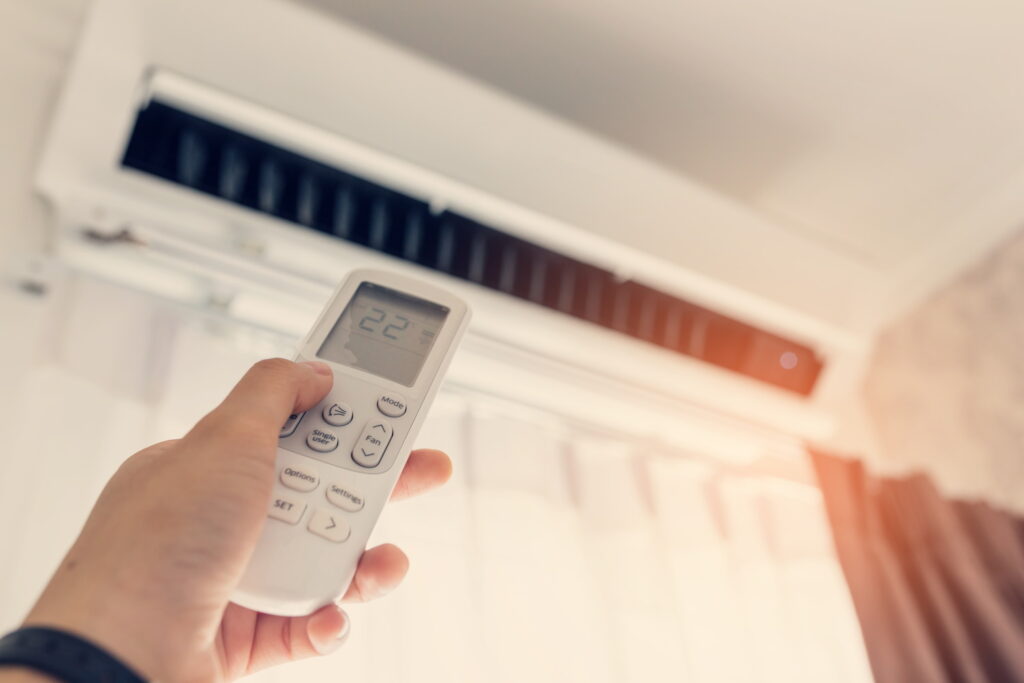 With rising temperatures and warmer summers, more of us are looking to install A/C in the UK.

Particularly in areas such as sunrooms and conservatories, where heat tends to become trapped in the summer, it can be a great relief to install an air conditioning system.

This article will cover what you can expect to pay to install air conditioning and A/C units, factors affecting the cost and other common questions around.

The average cost of installation depends on many factors, which we’ll look at in detail below.

There are two types of air conditioner that require installation by a professional contractor: split air and ducted.

Now that we’ve got a basic understanding of the costs, let’s take a look at some of those variables that can cause this average price to increase or decrease.

Factors That Affect the Cost of Installing Air Con 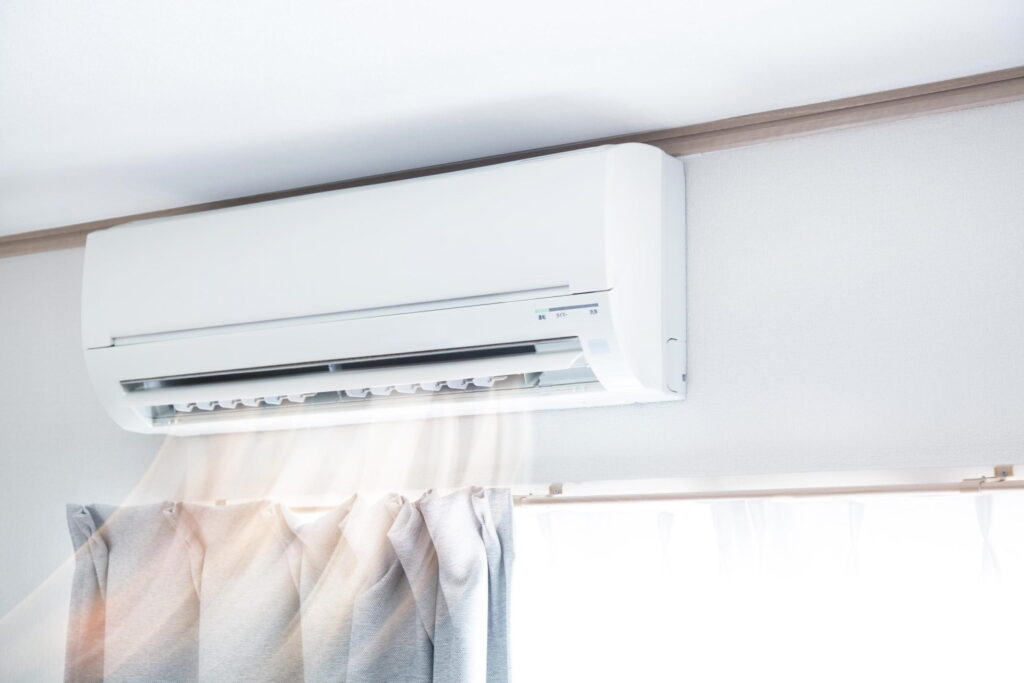 The bigger the area that needs to be cooled down, the higher the cost of air conditioning as you’ll need a unit that is powerful enough to cool the whole room.

The general ratio of space:air conditioning size is 1 ton:400 sq feet or 37m².

The average UK bedroom is 16m², which equates to about ½ ton of A/C.

A “ton” of air conditioning refers not to the weight of the unit but to the quantity of air it is able to remove from the room in an hour.

The size of the unit to size of space ratio basically equates to how many units you will need per room or per household.

Although we have only discussed two so far, there are actually three types of air conditioner systems commonly used in homes and offices.

Those are freestanding units, split air and ducted air conditioners.

The first does not have installation costs since it is simply plugged into a power outlet like an electric heater and costs between £300 and £400 to buy.

The second both need to be installed by professionals and, of the two, ducted air conditioners are more expensive. We’ll look into the differences between each type later in this article.

However, a sophisticated air conditioner will have special controls and features to make it as cost and energy-efficient as possible. These include:

It’s important to get the right output for the size of the room in which you wish to install air conditioning.

Just as a system that’s not powerful enough will be a huge waste of energy if it is not actually cooling down the room, so will a too-powerful system be wasting energy that is not necessary.

Take a look at this table to understand the optimum output for the size of your room. Air conditioner output is measured in BTUs (British Thermal Units). 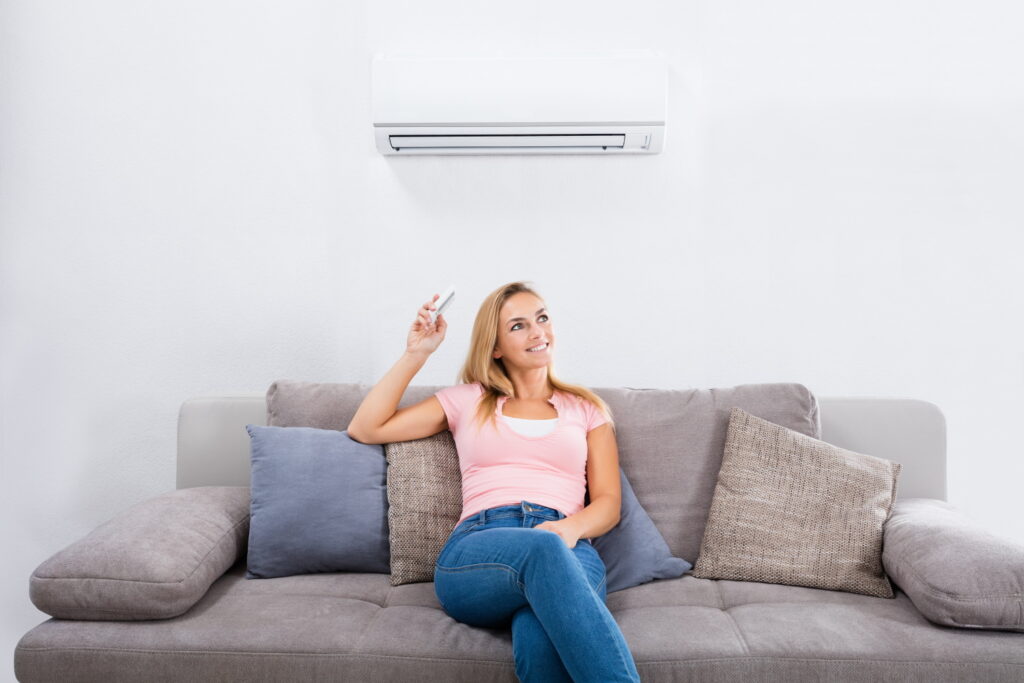 So how exactly does air conditioning work? Air conditioners are systems that modify the “condition” of air, which actually involves not just cooling it down but also heating, humidifying and dehumidifying as well as cleaning and ventilating it.

They work by moving the hot air from the inside of a room to the outside and then transmitting cool air back inside.

The cool air comes from the machine itself, which passes it over a set of cold pipes, called an “evaporator coil”, which is full of coolant, also known as refrigerant.

As previously mentioned, there are three different types of air conditioning systems. Let’s take a look at them.

This type of air conditioner works like a plug-in heater. You buy it, bring it home and install it yourself by connecting it to a power outlet.

This is the cheapest type of air conditioner, is good for small areas and can be easily moved around depending on where it is needed most.

However, compared to wall mounted systems and ducted systems, they take up space on the floor, which can be unsightly, and in addition, freestanding air conditioners are not as effective as their larger counterparts.

These two parts are connected by cables and copper pipes. The exterior part contains the compressor and remains outside while the internal part goes inside and is the part through which the cool air is filtered into the room.

The advantage to this split system is that the compressor, which is the loudest and most space-consuming part of the system, remains outside.

However, it does mean the addition of a rather unsightly extractor fan to the outside of your home.

Split air conditioners are very efficient and space-saving compared to floor standing systems and they are operated via a remote control which monitors the temperature, the fan power and other features such as climate control, timer and night mode.

They work in a similar way to split air conditioning systems with the main difference being that the cool air is filtered into the home via a ceiling duct.

You can have several outlets across your home that are all connected to the same central unit, meaning you can efficiently control the temperature of your entire home.

The different outlets can also be controlled individually in the same way as with a split air system.

It’s difficult to give an exact number for the running costs of air conditioning but one thing can be sure: it’s not cheap.

Depending on the size of the unit, it can cost anywhere between 8p and 14p per hour to run an air conditioner.

This amounts to around £25 per month for one unit (based on having it on for 6 hours per day), but homes with a multi-split system with several outlets are looking at up to £150 a month.

For comparison’s sake, the cost of running a desk fan for 6 hours per day would amount to less than £2 per month.

Naturally, the quality of air conditioning defies comparison but this should give you an idea of how much energy an air conditioner consumes.

To keep your running costs low, make sure to install a system with the correct size and power level for the room. Equally, it might be worth investing in a higher quality, more energy efficient unit that will save you money in the long run.

Another thing you can do to keep your running costs under control is to regularly maintain your air conditioning system. An A/C should be serviced a minimum of once per year and any necessary repairs should be carried out as quickly as possible to keep the machine running smoothly.

Make sure to keep the vents clean, too – it’s easy to spot when they are getting blocked by taking a quick look at the compressor.

You should change or clean the air filters regularly to prevent the airflow becoming blocked, which will greatly decrease the efficiency of the air con.

Not only will this reduce your system’s efficiency but refrigerant vapour is also very harmful to the atmosphere if it escapes into the air.

Get Prices on Air Conditioning Installations Near You

We’ve done our best to give you a good idea of what you can expect to pay for installing air conditioning.

We work with all the best A/C installers ready to price your job. Get free, no-obligation quotes in your local area and compare prices using the form below.