It is particularly important for amateur electricians to be as safe as possible when working with wiring, and a robust understanding of which colours you can expect to see (and why) will ensure you are prepared.

This guide will provide clear and instructive answers to many of the questions that arise around the colours of electrical wiring. 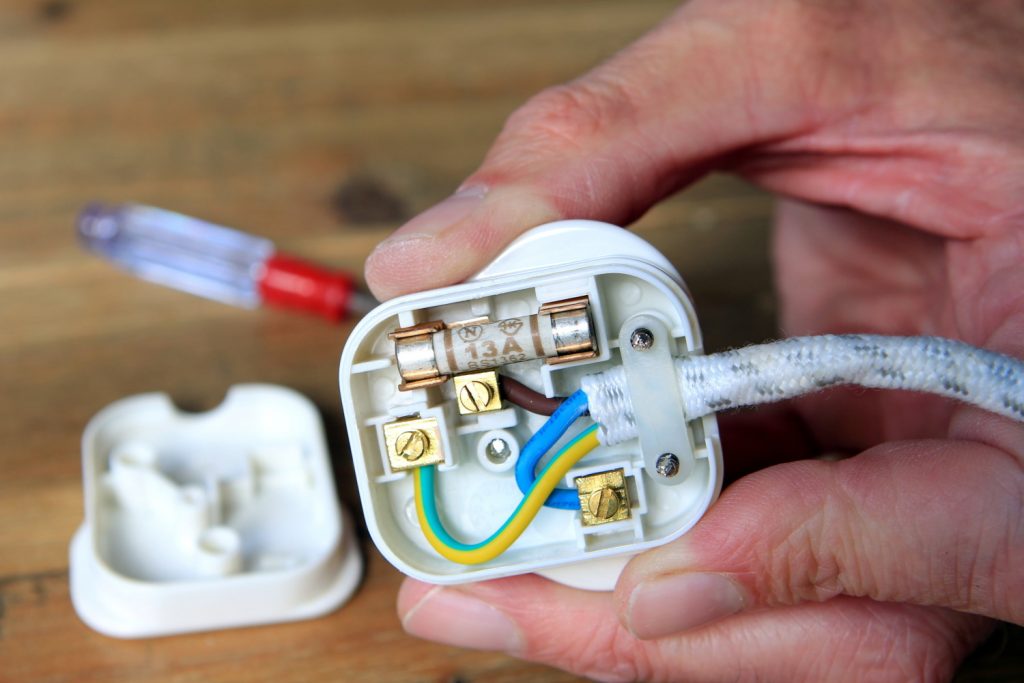 Contents hide
1 UK Domestic Wiring Colours
1.1 New Wire Colours
1.2 Old Wire Colours
2 When and Why Did Wire Colours Change?
3 Where Will I See Old Wiring Colours?
4 Where Will I See New Wiring Colours?
5 How Can I Tell If The Wiring In My House Needs Updating to the New Colour Scheme?
6 How Can I Tell If an Appliance’s Wiring Needs to Be Fixed?
7 Which Colour Wire is Most Dangerous?
8 Can the Different Colour Wires Touch Each Other?
9 How Does Electricity Flow Between the Wires?
10 Where Might I See More Than Three Colours?
11 Looking for an Electrician Near You?

Legally required in any new electrical installations since 2006.

Why Do Wires Come in Different Colours?

The three colours you will find correlate to three different types of wire: Live, Neutral, and Earth.

The colourful outer tubing of all of these is made of plastic, a good insulator that isn’t easy for electrical charge to pass through. Inside the plastic, the wire is made of copper, which is a conductive material that allows charges to pass through easily.

Two of the wires form the cycle which is needed for electricity to flow between a source and an appliance:

The third wire provides important safety measures, in case there is a fault that causes the live wire to become loose:

It is the earth wire which acts as a safeguard against electrocution and permanent damage to devices. If the live wire connects with the casing of an appliance, this will itself become live, meaning that anyone who touches it is at risk of shock or electrocution.

However the human body is a relatively high resistance path to take, so having a low resistance ground connection will ensure that the current follows this path away from the appliance instead.

When and Why Did Wire Colours Change?

Between the Second World War and 1977, new wiring colours were established in order to reduce confusion between the wires.

In 1977 these colours were published as the British standard by an organisation called the Institution of Electrical Engineers (IEE), and remained the legal requirement until 2004.

In 2004 the UK began to harmonise wiring colour regulations with the rest of Europe, and in the period between 2004 and 2006 either the old colours or the new colours were acceptable.

This was permitted as long as there was not a mixing of the colour combinations, and any change was clearly labelled.

From 2006 onwards harmonisation with European wiring was completed, in line with the International Electrotechnical Commission (IEC) standards. These colours remain the legal requirement for any new installation.

Where Will I See Old Wiring Colours?

If your property was built before 2004 and has not had changes to the fixed wiring since, then you are likely to see the old wiring colours.

Where Will I See New Wiring Colours?

Most appliances will use the new wiring colours as they were established by 2006, and any property that was built and had fixed wiring installed after 2004 will also use the current colour scheme.

Some devices do not have an earth wire as they have been designed in such a way that the live wire cannot touch the casing, or the casing is made of plastic.

These devices will be labelled as Class II, double insulated, or bear the symbol for double insulation which is a square within another square.

Examples of appliances that are commonly double insulated include vacuum cleaners and power drills, and these will have undergone official testing to ensure that they are safe without the earth wire.

How Can I Tell If The Wiring In My House Needs Updating to the New Colour Scheme?

Signs that you may have old wiring that has become faulty can include the following:

The best way to know if your house’s fixed wiring needs to be updated is to contact a licensed electrician, who can complete an Electrical Inspection Condition Report (EICR).

This report will tell you everything you need to know about the condition of your electrics, and whether any parts of it need to be updated to the current standard.

All wires are subject to wear and tear, so even if your fixed wiring already uses the current colour scheme, it may need to be repaired.

If you own your home then there is no requirement to get an EICR, but it is highly recommended to do so at least every 10 years to ensure your safety and continued smooth running of the electrics.

If you are renting, then your landlord is legally obligated to carry out an EICR for each new tenant in a property as of 2020.

How Can I Tell If an Appliance’s Wiring Needs to Be Fixed?

Most faults that affect an appliance that cannot be traced to a problem with your home’s fixed wiring are due to an incorrectly wired plug, or damage to the insulation within the plug.

If you open a plug with a screwdriver, you will see each wire is connected to a terminal. Each colour always connects to the same terminal so if the plug is correctly wired you will see the following:

One way to remember these placements is to look at the second letter of each colour wire, as it correlates with the first letter of the direction to connect it to – e.g bLue and Left.

Which Colour Wire is Most Dangerous?

The live wire is the most likely to cause harm as the mains supply current flows through it at 230 volts, and if it is not correctly connected then it can cause shock or electrocution.

Therefore you must make sure that there is no power source connected to the wire before attempting any work on it.

You are less likely to receive a shock from the neutral wire, though you should still be careful as it can run at a very high heat. Likewise, there is little risk of shock from the earth wire, but it’s not impossible so caution should be taken when handling any of the wires.

Can the Different Colour Wires Touch Each Other?

If the live wire touches either the neutral or the earth wire it will cause a short circuit, meaning the fuse will blow.

If you’re looking for a fault within the wiring of a plug, you may see that the live wire has touched either of the others, and so you will need to ensure that none of the wires are touching before testing the appliance again.

How Does Electricity Flow Between the Wires?

The UK mains supply runs on an alternating current (AC), which means that for each cycle through the live and neutral wires, the current changes direction as it returns to the source.

This process happens 50 times a second, which you might see expressed as 50 hertz (hz).

AC is used to transport electrical currents from power stations to your home, as it allows for voltage to be changed along the way by a device called a transformer.

A simplified way to think of voltage is the force that pushes electrons between two points. When electricity is in transit to your home, a very high voltage is used which decreases the current – the higher the current, the hotter the transmission wires get which leads to power dissipating to the surroundings.

As it reaches your home, another transformer decreases the voltage to a safer level of 230 volts (v).

You may come across devices that run on a direct current (DC) instead of an alternating one. These can include batteries, televisions, and other small electronics.

This means that when the alternating current from the mains has entered the device, it is changed into a direct current which no longer changes direction as it flows from source to appliance.

The type of power supply used in domestic properties that has one live, one neutral, and one earth wire is called single-phase.

In some commercial properties that use enough power to require more than one electricity meter, three-phase power may be used.

You are unlikely to see these extra colours in your home or appliances at the moment.

However, there is ongoing discussion about the benefits of three-phase power for residential properties, as it could increase the capacity for people to adopt more ecologically sound energy practices such as charging electric vehicles.

So as electrical standards change, you may need to take the extra live wires and their colour scheme into consideration when undertaking wiring projects.

Looking for an Electrician Near You?

Electrical work is very dangerous business. Therefore, it’s best you work with a qualified electrician unless you’re qualified yourself.

We work with all the best electricians ready to price your job. Get free, no-obligation quotes in your local area and compare prices using the form below.