Moving a boiler may simply be a necessity if you’re planning a house extension or other modification. Otherwise, it might be a tactical move aimed at extracting more space from a certain room, or moving a noisy boiler elsewhere if a spare room is now occupied, etc.

In any case, moving a boiler can be a reasonably simple task if it’s only being moved within the same room or direct vicinity, or a costly job if it’s being relocated to somewhere else completely.

After all, boilers are connected to various other components ranging from their own flues and tanks to the radiators. 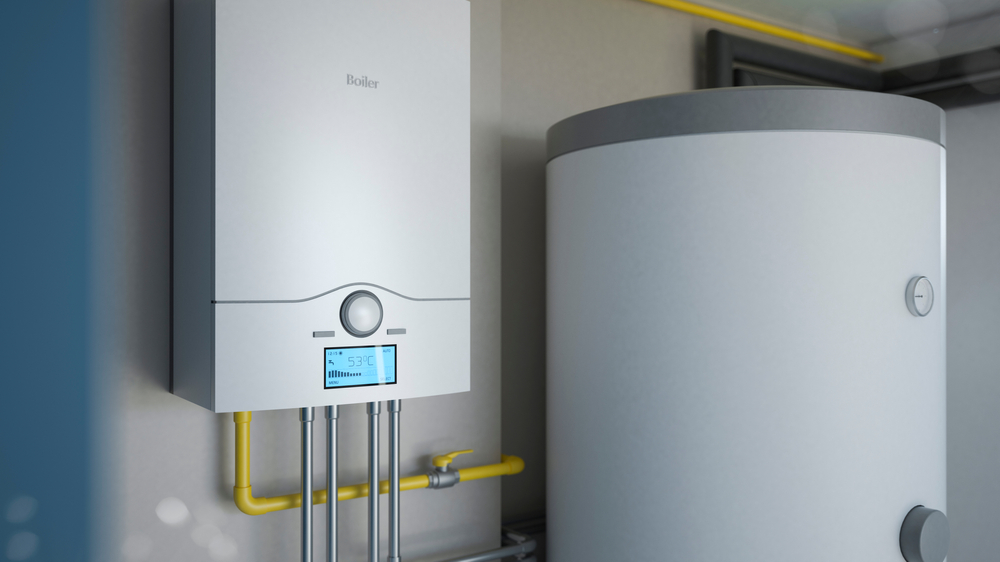 Average Cost of Moving a Boiler

The cost of moving a boiler depends on the type of boiler in question. Combi-boilers, which are modern all-in-one units, are the easiest to move since they’re not connected to any additional parts like hot water tanks. This means that they’re also the most flexible systems to move.

By collecting quotes from 6 primary sources and 8 secondary sources, we found these average costs for moving different types of boilers:

Only combi boilers can sometimes be moved to the attic. Expect to pay £500 – £1000  The costs of moving a boiler depend on what parts will need to be added, chopped or changed.

The highest costs are when floorboards need to be removed and many new parts need to be added to the system.  It will depend on where your home’s gas and water pipes already go and how easily they can be routed to your preferred boiler location.

Sometimes, it simply won’t be viable to move some systems.

The most common boiler parts include:

The remainder of the cost is made up of labour. Costs could range up to £1,000 or higher in some situations but are more likely to be around the £500 mark providing the engineer can reuse much of the existing parts.

Why Move a Boiler?

There are a few reasons to consider moving a boiler:

This is the main reason to move a boiler, regardless of where it is in the house. For example, if it’s in the garage then a garage extension might force the boiler into a different part of the garage or elsewhere in the house.

Likewise, if it’s in the kitchen then a kitchen extension might require it to be moved, etc.

To Free Up More Space

Boilers in the kitchen are often moved to make room for another fridge or freezer. In the bedroom, they might be moved to make way for extra storage, etc.

The Boiler is in an Inconvenient Position

If a boiler is fitted in say, an unoccupied bedroom, and tends to be quite loud, then moving it elsewhere might be a good shout.

Where To Move a Boiler

Kitchens are a popular room to fit a boiler since – small combi boilers can likely fit inside one of the cupboards. It’s more likely that people will want to move a boiler of a cupboard than into it, however.

Utility rooms are generally out of the way of the main home and still have a relatively controlled climate, providing there are no leaks.

One thing to consider is that the boiler will have to have its own dedicated space and the area around the wiring and piping will have to be clear.

The loft is becoming an increasingly popular place to house a boiler. Obviously, it’ll be nicely out of the way. One issue here is that the loft will have to be easily accessible and boarded with decent lighting.

Insulation will have to be installed to keep the climate relatively balanced and even then the boiler will likely need extra frost protection.

It’s not good for boilers to be subjected to extreme temperature differences. Also, for any installation and maintenance works, the loft is not preferential for most heating engineers!

Another consideration here is that installing a new flue in a loft will likely be subject to Permitted Development, and won’t need Planning Permission, but with some exceptions in conservation areas.

The bedroom can be a good place for a boiler installation but noise is an issue. Can make use of unused space, e.g. in a spare room.

Many traditional boilers are fitted in the garage. Depending on the garage, the boiler may or may not need additional frost protection. Similar principles to the loft apply; boilers are stressed by extreme temperatures, but this can be easily circumvented in most garages.

The airing cupboard typically holds the water tank in the case of traditional or system boilers (e.g. not combi boilers which heat water from the unit itself).

In some cases, it might be possible to switch out an older hot water tank system for a combi boiler that is fitted in the airing cupboard, also benefiting from the fact all the right piping is already present which will make the job cheaper.

All of the above options are available for most combi boilers, but not system or traditional boilers that require either a hot water tank or a hot water tank and a feed and expansion tank, which is usually housed in the attic.

The actual boiler component in these systems would have to remain on the ground or second floor (typically the ground floor).

Cost of Moving a Boiler Vs Installing a New Boiler

Firstly, it’s wise to consider the cost of moving a boiler vs installing a new one.

Of course, in the case of modern A-rated boilers that have been fitted in the last 5 years or so, replacing the boiler would rarely ever be economically advantageous compared to moving the boiler.

However, at the 10 to 15-year mark, it’s worth considering replacing the boiler entirely instead of just moving it.

New boilers are more efficient and perform better than their ageing counterparts, plus boilers older than 20 or so years will likely be poorly supported by replacement parts in the coming decades, making maintenance more pricey.

Consider installing a new boiler if:

Replacing a boiler will likely cost around £2,500 for most 3-bed houses, less for flats and apartments and more for larger houses.

How Long Does it Take to Move a Boiler?

It’ll probably only take a day to move a combi boiler, but a system or conventional boiler might take 2 to 5 days to move in some cases, especially in a larger house with a complex system.

Additionally, the system will have to be drained and it’s also wise to flush the system at the same time, as well as bleed radiators.

Heating engineers must be registered with Gas Safe by law. Choose a heating engineer with an excellent local reputation for both moving boilers and installing new ones.

Get Prices on Moving a Boiler Near You

We’ve done our best to give you a good idea of what you can expect to pay to move a boiler.

We work with all the best boiler engineers ready to price your job. Get free, no-obligation quotes in your local area and compare prices using the form below.