Modular extensions are pre-built off-site, in a factory or workshop away from your home. Once completed, they are delivered to your house and slotted into place.

Modular units are already used in schools, hospitals and commercial buildings of all kinds. Instead of crowding the site out with machinery and building from scratch, which takes time and is hostage to the fortunes of the weather, prefabs are simply dropped into place. 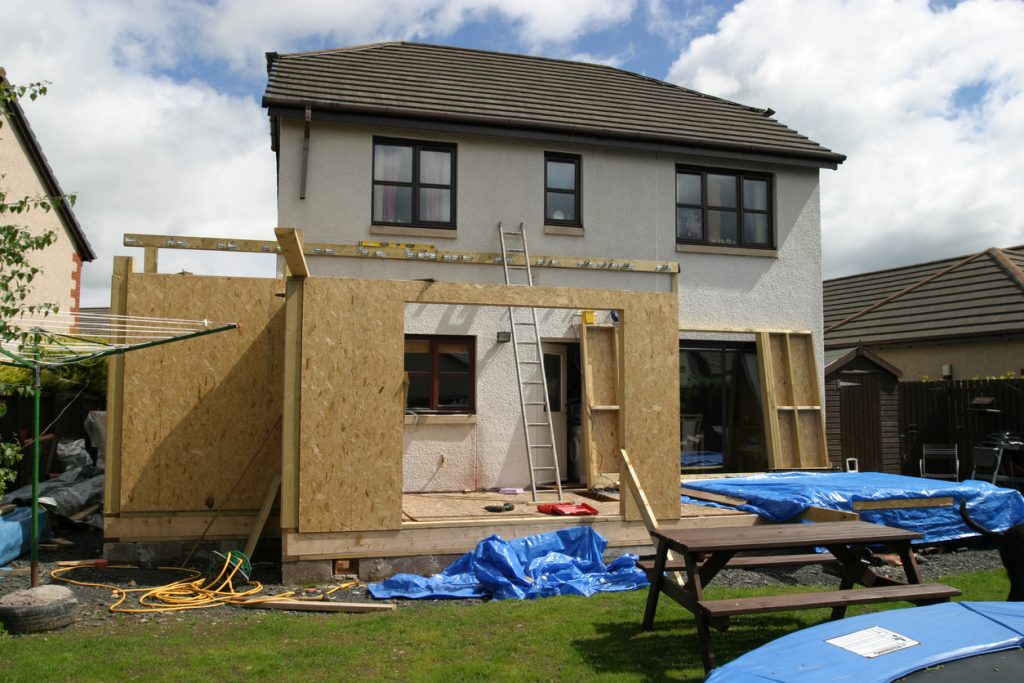 Average Costs of Modular Extensions in the UK

We collected quotes from 8 modular and prefabricated extensions builders to find the following average quotes for standard projects.

Prices are for a standard modular extension project excluding decorating, electricals and plumbing.

In London, the Home Counties and South East, costs of £2,000/m2 and above are much more likely.

Prices also depend on whether you want a conventional extension, garden room, orangery or conservatory.

Garden rooms that aren’t connected to the house will cost towards the lower end of the scale. These are great as small bedroom outhouses, studies and home offices.

Here are some extra costs which mostly pertain to the interior of the modular extension:

Factors That Affect The Cost of a Modular Extension

Modular extensions are usually built to a high standard, but there are many additional factors that affect the cost. Aside from the obvious cost factors, e.g. quality and size, you’ll need to bear the following in mind:

The base is a crucial component of a modular extension. Most bases today are made from steel or aluminium, which is durable and long-lasting.

These are pre-cut to the exact size required and slotted in the external panels of the prefab. Other insulation may be added, as well as moisture membranes, etc.

The outer wall can be constructed from timber cladding, metal panels, brick or rendering. Brick is one of the more expensive options.

If you want your modular extension to look like a standard conventional extension, and like the rest of your home, you’ll likely want brick walls.

Since the entire building will have to be craned into position, access really matters when it comes to pre-fabs.

It’s worth mentioning that it is possible to build various pieces off-site and then carry them on-site through the house, thus making the extension semi-modular.

Self Build points out that difficult access may result in having to temporarily close your road – you will likely only get permission to do that if you live somewhere quiet or in a cul-de-sac.

Modular extensions still need a solid, flat base. Where a garden or patio space isn’t flat, or needs evening out or even digging (e.g. if it’s on an incline), then groundworks can add considerably more to the project’s cost.

What Are Modular Extensions?

Conventional extensions are built on-site, at your home. The builders will transport materials to your site and build the extension there, pretty much from scratch.

Contrastingly, modular extensions are built off-site. They’re pre-fabricated. Modular extension builders will construct the extension in an off-site factory or workshop, and then transport it to your home.

They’ll likely use a crane to lift the extension over part of your house or garden. That might sound alarming but cranes can lift many, many times more weight than an extension.

Are Modular Extensions Worth It?

Modular extensions are becoming increasingly popular as homeowners look for quick, convenient and effective ways to expand their homes.

There’s no evidence to say that modular extensions are worth any less than standard extensions.

Extensions can boost the value and sales price of a home by around 15% to 25%. Nationwide found that extended 3-bed semi-detached houses were worth 23% more on average.

Extensions, in general, display a return on investment (ROI) of around 71%, equating to average profits of approximately £17,000, according to studies by Zopa.

If you want to see how the value of an extension increases or decreases in your area, The ONS has an interactive tool here.

As property values continue to rise, so will these figures. In some parts of the country like London, the South-East and Home Counties, extensions can increase a property’s value by significantly more than the above figures. If you add a small extension to a house in Kensington and Chelsea, you will boost its value by well over £100,000!

In short, modular extensions will definitely add value to your home.

What Kind of Modular Extensions Are There?

Modular extensions are a little more limited in style and use compared to conventional extensions. The most popular type of modular extension is probably an orangery, which is a semi-enclosed conservatory-like space with a lantern window and solid walls. Orangeries are very popular and are highly sought after, so this is a sensible choice for many.

The main options are:

Larger modular extensions can look pretty much the same as a standard outdoor extension and have a max size of around 50m2 per single building.

There is some debate about whether modular extensions can fall under the rules for temporary buildings, and how this might affect the planning process.

All things considered, it’s wise to assume that your local authority will view your modular extension in exactly the same way as any other extension.

PDRs do not apply in some of the following areas:

If you live in any of these areas, you’ll need to contact your local authority for specific guidance. PDRs only apply to the ‘original fabric of the building’, which means that if your home has been extended already, you’ll need Planning Permission.

Here are the current limits:

For all single-storey extensions:

If given Prior Approval by the Planning Authority following a special consultation scheme with neighbours (not Planning Permission), It’s possible to extend by:

These above rules are fairly new and enable 30m2 extensions or larger to be constructed without Planning Permission. Always contact your Local Authority if you are unsure (you should anyway). You will also likely need to pay for a Lawful Development Certificate.

Since modular extensions are built off-site, they’ll already come spec’d out with most features needed to pass Building Regulations.

Speed: Modular extensions are built off-site. Once they’re finished, they’re transported on-site and only minimal work is required to finish them off.

The only works that need to be carried out on-site are building the foundations or base, which can take around a week.

Once the extension is lifted into place, it might take 7 to 14 days to finish off, depending on what sort of decorating and interior design features are needed.

Moreover, modular extensions aren’t as easily delayed by the rain.

Modular extensions are typically cheaper than conventional extensions. A rough estimate would be that they’re around 20% cheaper or so.

This will vary depending on the location, ease of access to the site, and the extension’s specifications.

Traditional on-site builds require the home to be turned into somewhat of a building site for as long as 2 to 3 months.

Modular extensions cause minimal site disruption and are much quicker to build, making them a relatively hassle-free option. This also means dealing with less noise and mess.

The latest generation of modular extensions are built using high-spec materials that are purpose-built for the job.

Another USP of modular extensions are their eco-friendly credentials. Since they’re built off-site, they require fewer deliveries and less energy usage or carbon emissions per project.

Modular extensions have latched onto this and many offer sustainable sourcing guarantees.

Since modular extensions are made in a controlled factory environment, they’re subject to greater quality control.

Modular extensions are best for conservatories, garden rooms and orangeries.

If you’re looking to extend your house and create an open plan living space or move your kitchen into your extension, modular extensions may not be an ideal option. They’re better for ‘bolting on’ or adding another room to your house.

With that said, modern modular extensions can be hard to tell apart from traditional extensions, so they don’t look ‘bolted on’.

Access is a big one, as modular extensions will have to be crane-lifted into your garden. This isn’t always as big of an issue as people expect – modern cranes are capable of lifting extremely heavy loads.

It’s possible to lift a modular extension over a semi-detached house. This might involve road closures, which will require meticulous planning with the local authority.

There are budget, mid-range and high-end options when it comes to modular extensions and you do somewhat get what you pay for. A modern, high-spec build will last longer than a budget type, as you might expect.

Get Prices on Modular Extensions Near You

We’ve done our best to give you a good idea of what you can expect to pay for a modular extension.

We work with all the best modular extension contractors ready to price your job. Get free, no-obligation quotes in your local area and compare prices using the form below.