Boiling water taps have been around since the 1970s, but current models are more efficient and effective than ever.

While Quooker is still probably the most well-known boiling water tap brand, Grohe, Adobe, Franke, Qettle and InSinkerator are all strong competitors.

As boiling water taps have become more popular, they’ve also decreased in price. You no longer need to fork out a vast quantity of cash to enjoy the convenience of instant boiling water.

Moreover, while these devices were previously held back by energy efficiency and safety worries, this is no longer the case.

This article will review the cost of installing Quooker taps in the UK, factors that affect the cost and other common questions surrounding quooker and other boiling taps. 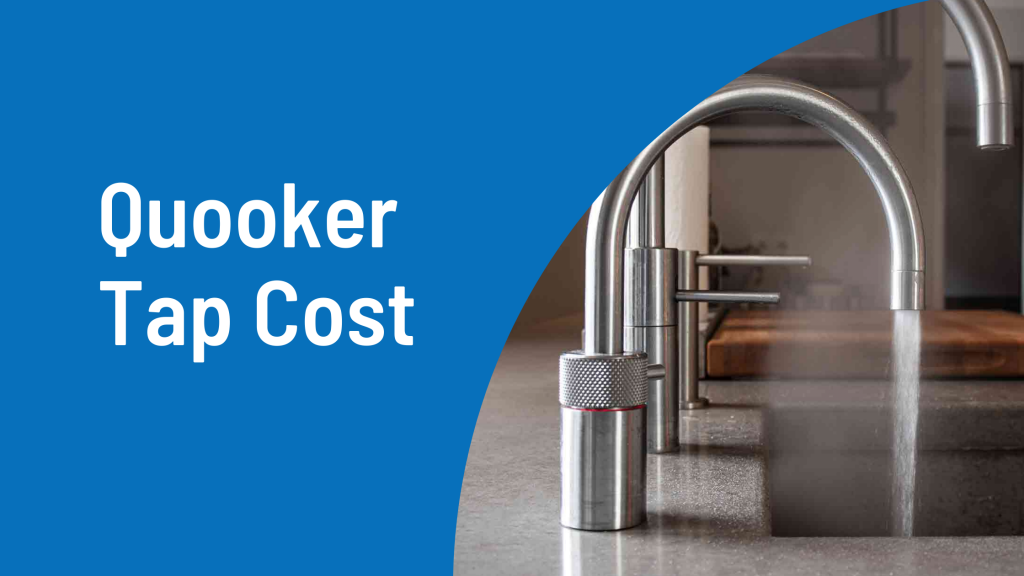 Below are the costs of boiling hot water taps by brand. Filter replacement times vary depending on the water quality and mineral content in the area.

Below is the average costs of various boiling water taps, with the installation costs. Most plumbers will be able to install boiling water taps. The job is not particularly complex, though mistakes can be costly.

We used quotes from 11 manufacturers and plumbers to find these average prices, including VAT and all required components:

The average job price for installing boiling water taps is around £1,000 for typical installations, rising to £2,500 for high-end options. It is possible to install a boiling water tap for around £500 to £700, especially if you’re willing to go DIY.

What Are Boiling Water Taps?

Boiling water taps look and operate in the same way as any other kitchen tap.

However, they have purpose-made under-sink boilers which provide very hot or boiling water on demand in addition to your standard hot and cold water.

These are called 3-in-1 taps (hot, cold and boiling), and some come with added water filters.

You can also get 4-in-1 taps, which integrate a water filter and a water-cooling device, and even 5-in-1 taps, which provide sparkling water in addition to everything else – the ultimate tap.

This is pretty much a moot point for your average user, but some coffee enthusiasts will insist that temperatures of around 95C are required for the optimal cup!

Are Boiling Water Taps Worth It?

With a boiling water tap, the kettle becomes redundant. Boiling water is provided on-demand, so you’ll always have it regardless of whether you’re making tea or coffee, cooking or washing up.

This is tremendously convenient for anyone that does those things several times a day.

It is true that boiling water taps are somewhat of a ‘mod con’, but the benefits are more than superficial when you take a closer look at what they have to offer.

This is the obvious benefit, and it’s why people decide to get boiling water taps. Not only does instant boiling water save time, but it also makes cooking and washing up quicker and easier. All those minutes add up, especially if you make multiple cups of tea or coffee a day!

Boiling water taps are stylish additions to any modern kitchen. They’re becoming essential for modern high-end kitchens and will boost the appeal of any kitchen.

Something else worth highlighting is that some kettles can be very heavy, making them unwieldy and less safe to use.

Boiling water taps are an excellent choice for those with disabilities, arthritis or other wrist and arm conditions or injuries.

According to Which? boiling water taps are marginally less expensive to use per day compared to kettles. Boiling water taps cost within the region of 3p per day, whereas each litre costs around 2.3p to boil in a kettle.

It’s also common to boil much more water than you need when you boil a kettle, whereas boiling water taps are on-demand.

The cost savings are obviously minuscule in the short term, but they do have an impact in the long term. By the same token, boiling water taps are also often more eco-friendly than kettles.

Manufacturers have massively refined their safety approaches in recent years. The risk of accidentally turning on the boiling water is extremely low.

There is no point in shying away from the initial costs of boiling water taps. Many models cost in excess of £1,000 without the cost of installation.

While it is possible to fit them DIY, this will require some level of DIY or plumbing experience. It’s usually wise to opt for professional installation.

Standard taps require very little maintenance. Since boiling water taps have more moving parts, they do require some maintenance and you have to look after them to keep them running smoothly.

However, build quality and standards are very high amongst top manufacturers today.

As noted, it’s usually wise to install boiling water taps professionally rather than going down the DIY route.

It’s also often necessary to upgrade the sink or worktop, clear space underneath the sink for the hot water tank and filter, and make extra room for CO2 cartridges for sparkling water taps where applicable.

What is The Best Boiling Water Tap Brand?

The competition amongst these well-known brands is pretty hot and they’re generally hard to split. Quooker is probably the most well-known.

Grohe and Franke offer a variety of higher-end options. InSinkerator and Qettle are great choices for mid-range and lower-end 3-in-1 models.

How Long Does It Take to Install a Boiling Water Tap?

Boiling water taps are relatively easy to install. Most plumbers will finish the job in around 2 to 5 hours. The job will only take 5 hours if extra work that needs to be done to integrate the tank, or CO2 cartridges for 5-in-1 taps. Any reconstruction of the sink or worktop will take additional time and incur additional cost.

For most plumbers, fitting a boiling water tap is straightforward. Nevertheless, direct experience in fitting one is an asset. The plumber must follow the manufacturer’s manual properly.

Filters are one of the main ongoing costs of running a boiling water tap. If you don’t periodically replace the filter, the heating element will become clogged and damaged.

Installing boiling water taps is relatively straightforward, but the sink does need to be of a certain standard to make it worth it. Many people choose to fit a new worktop, sink or even a new kitchen before fitting a boiling water tap.

Get Prices on Installing Quooker Taps Near You

We’ve done our best to give you a good idea of what you can expect to pay for a quooker tap.

We work with all the best modular extension contractors ready to price your job. Get free, no-obligation quotes in your local area and compare prices using the form below.