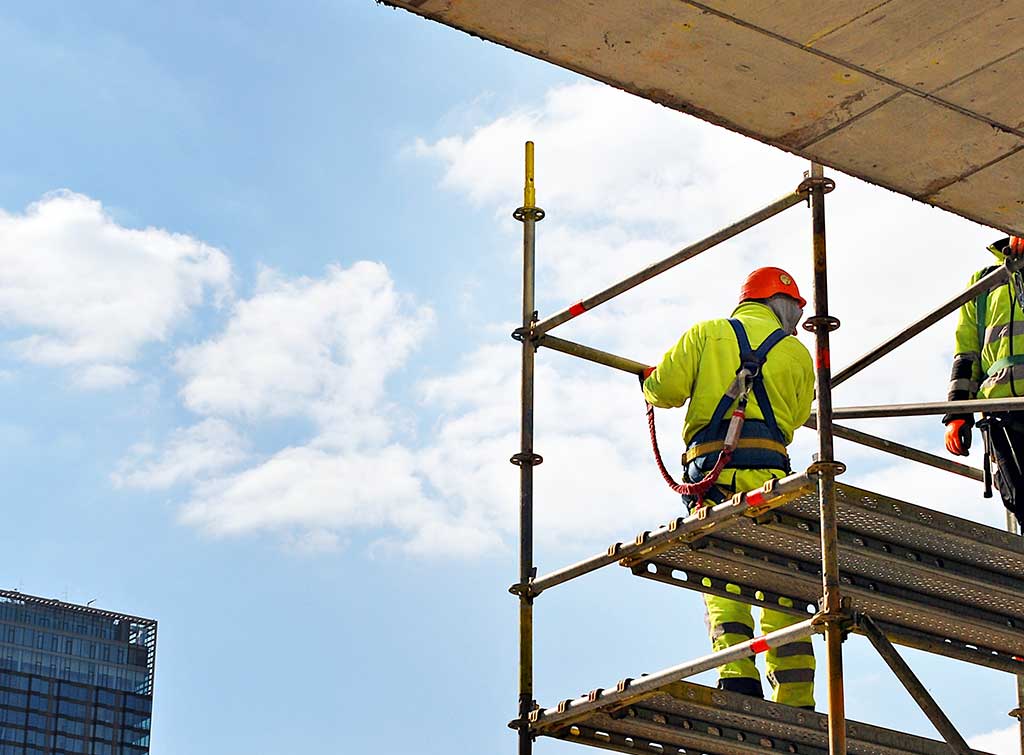 If you’re doing work on your home or building a house, scaffolding is something you cannot avoid.

It allows builders and tradesmen to access otherwise unreachable spots, as well as making for greater efficiency and safety.

Despite a high initial cost, scaffolding will save you money long-term as it means multiple people can be working on the same area at the same time and heavy materials can be quickly and easily moved around the site.

Most construction companies have their own scaffolding but that doesn’t necessarily mean you have to make use of it. Like with everything, it’s a good idea to shop around and get a few quotes before deciding on which scaffolding to use.

This article will cover what you can expect to pay for scaffolding, factors that affect its cost and common questions around scaffolding. 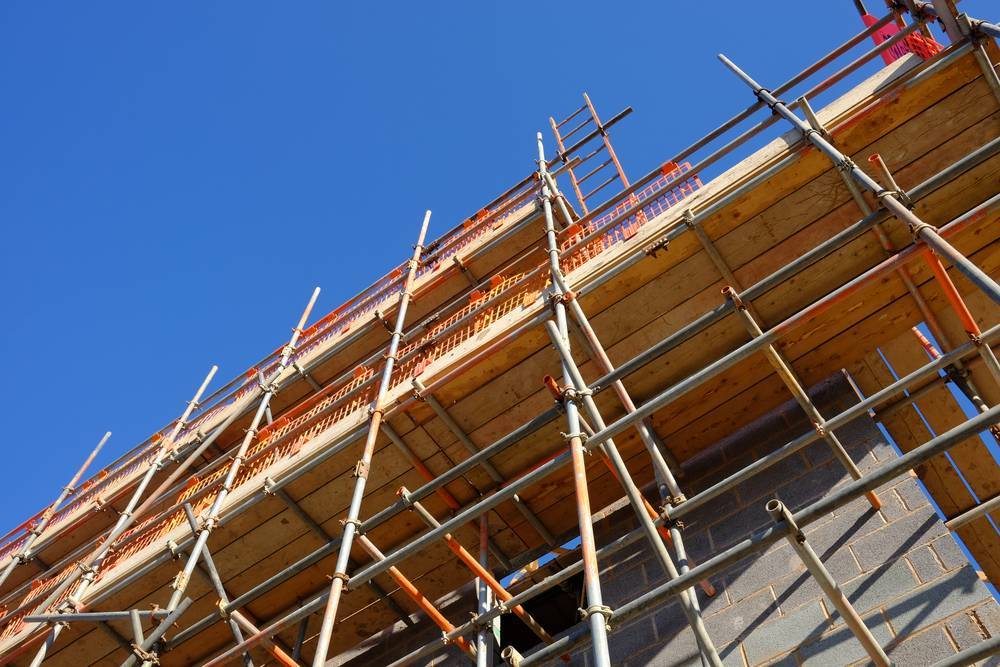 The average cost of scaffolding will vary greatly depending on many factors, which we will look at later in this article. Prices tend to average around £150 per day.

One of the biggest variables affecting the price of scaffolding is the type of building you are working on.

Scaffolding for a semi-detached house tends to be pricey since it needs to be placed around three sides of the building and often over the roof as well.

Scaffolding for terraced houses is cheaper as there are fewer sides to cover.

For a single side of scaffold, you’ll pay around £300 per week. If you have a conservatory, you’ll need to build a bridge over it, which will set you back between £450 and £900 per week depending on the size of the conservatory and your location.

If you need gutter repair work, you’ll need an access tower, which can cost anywhere between £65 and £500 per week, depending on the price factors we’ll list below.

Generally, hiring a scaffold tower to access the gutters of your house should cost around £250.

For smaller jobs such as this it is not uncommon for a company to increase this to £400 to make it worth it for them, so make sure to shop around before committing to one company.

Chimney repair work luckily doesn’t require the whole house to be scaffolded however it nonetheless requires a decent amount of height and access can be tricky.

Like any roof work, safety precautions are paramount here. Chimney scaffolding costs depend mostly on the type of chimney.

The contractor will need access to all parts of the chimney and so will need to construct a safe platform from which to work.

If the chimney is located at the eaves or on the gable end of the house, erecting scaffolding is easier and therefore cheaper – averaging about £600 per week.

For a chimney in the middle of the roof, you’re looking at a considerably higher price, between £900 and £1,000 per week. 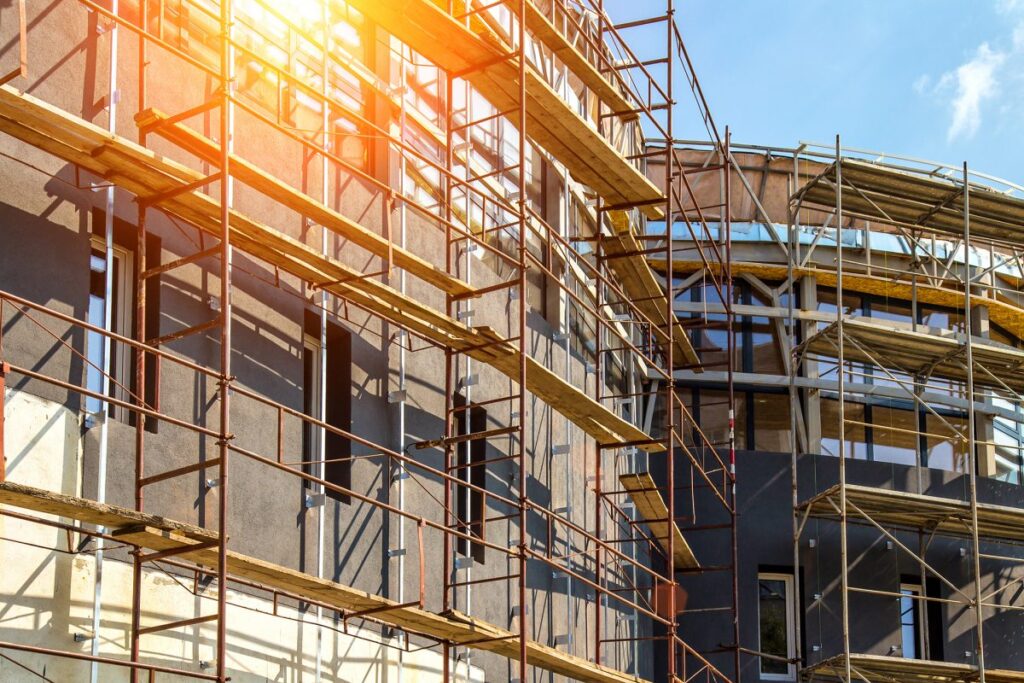 Hiring scaffolding can be cheaper than paying to use the scaffolding of the construction company carrying out the work on your home.

If you have a big, long-term job, it’s a good idea to get multiple quotes and compare these to what the contractor is offering.

However, if the work is small and short-term, many companies will not bother renting out scaffolding or will charge a much higher price to make it worth it for them, so it’s probably better to stick with your contractor’s equipment.

The cost of hiring scaffolding is calculated by combining the price of hiring the scaffolding and the time and labour needed to put it up and take it down.

This, of course, depends on the type of job you are having done. Scaffolders generally charge £150 per day in labour for setting up and removing scaffolding.

A scaffold tower, for example, may only take a few hours to set up, whereas scaffolding a semi-detached house can take up to two days. As a general rule, the cost of  scaffolding hire and labour are combined, which is why it makes sense to shop around.

There is usually a fixed-term of rental, normally a minimum of either 6 or 8 weeks. It’s also important to be clear on what will happen should the work exceed the agreed time period.

In this case, you may need the scaffolding for longer, so make sure to negotiate a per day or per week price with the contractor or scaffolder in advance.

A conservatory can somewhat throw a spanner in the works when it comes to scaffolding. Although lovely, conservatories make access to the house above their roof very difficult.

The roof of a conservatory is made of light materials such as glass or polycarbonate sheeting, which are not ideal for load-bearing.

Scaffolding over a conservatory requires the erecting of a bridge supported by towers on either end.

Setting up conservatory scaffolding typically takes only a couple of hours and the cost will be between £450 and £1,000 per week, or about £300 per metre per week.

The average cost of basic scaffolding per m² is between £15 and £20, plus £10 per m2 for edge protectors and another £10 for guardrails, meaning the total scaffolding cost per square metre is between £35 and £40.

If you require scaffolding for a loft conversion, the price for this will often be calculated according to square metre, since the dimensions, ease of access and the complexity of the job, can vary greatly. 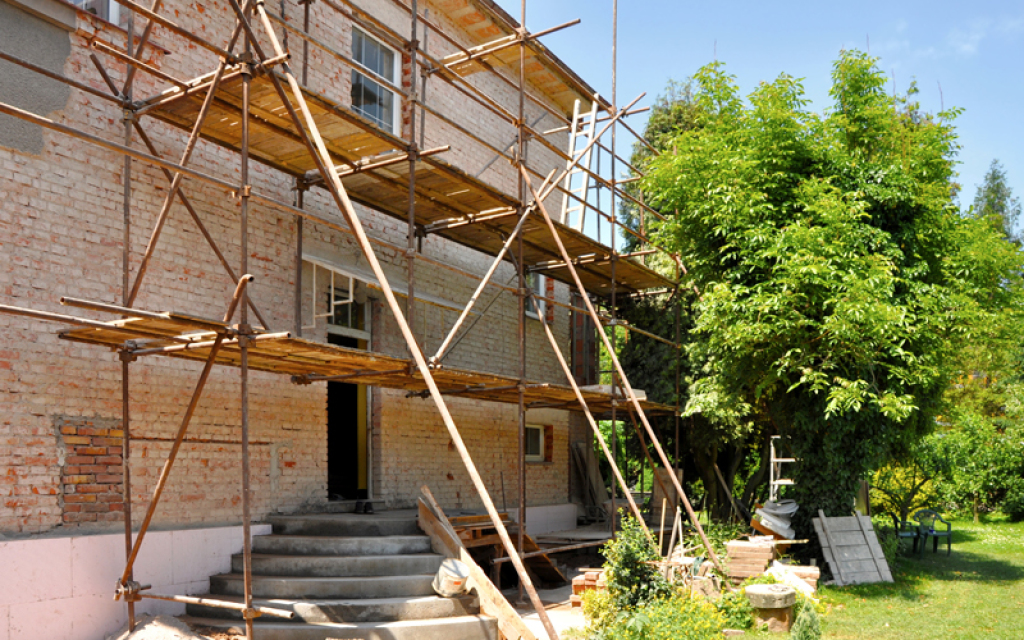 It is difficult to estimate an average price for scaffolding since there are so many factors that affect the cost.

In this section, we’ll detail some of these elements to help you get an idea of the cost of hiring scaffolding for your home.

How Much Scaffolding is Required

As we have seen in this article, scaffolding prices vary the most depending on how many square metres are required and how long the set up takes.

So naturally, for smaller areas, both the setup and the amount will be lower whereas for larger areas, both will be higher, and this is mirrored in the total price.

Equally, the higher your scaffolding, the higher the price since more height requires more metal poles and wooden boards.

Configuration of the Scaffolding

The configuration of your scaffolding is also an important factor. We have already looked at conservatory bridges and chimneys but the number of working levels will also come into play when it comes to cost.

Depending on the type of project, workers may need to access the house or walls at different levels, for example with a paint job, whereas roofing or gutter cleaning requires only one working level.

Fixed hire periods for scaffolding are typically six or eight weeks. Depending on the type of project, the construction company will quote you a fixed price for either. As previously mentioned, make sure to decide on a weekly or daily price if the project takes longer than expected.

Another important factor is location. Companies operating in big cities, particularly London, can charge up to three times more for scaffolding hire compared to those in rural areas.

If your project requires erecting scaffolding on a road or pavement you will need to get permission for the local council.

Not only does this incur a cost, but it can also slow down your project considerably, so make sure to deal with that before hiring a company.

What are the Different Types of Scaffolding? 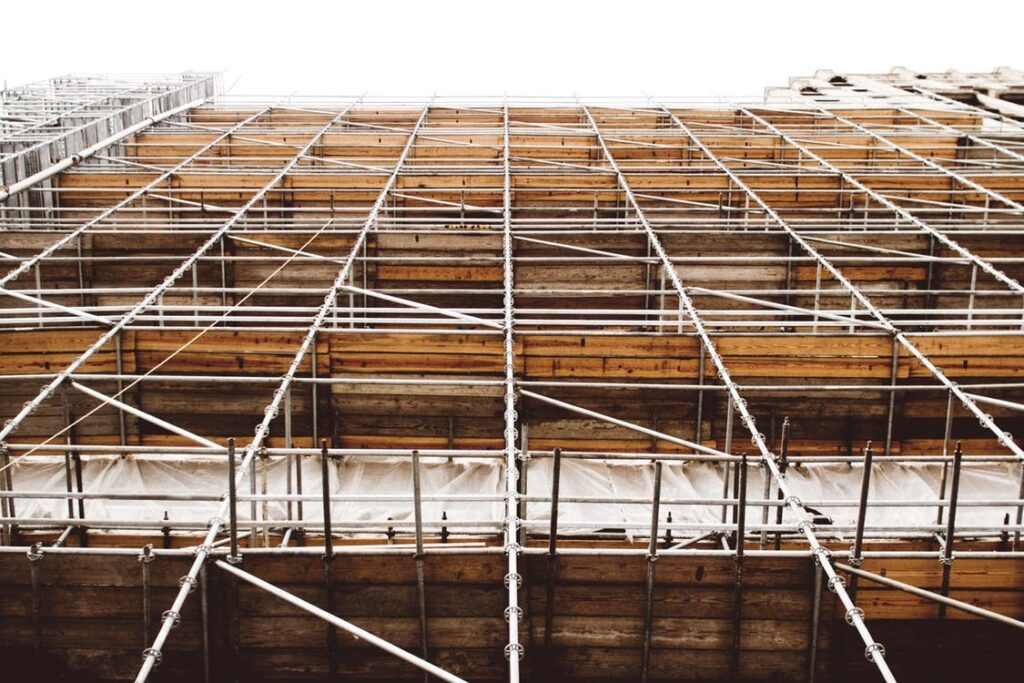 Scaffolding is a temporary structure composed of either timber or steel poles that are built into a frame with wooden boards connecting different parts for walking across.

It also comprises handrails and access ladders to allow workers to reach all levels safely and securely. There are various types of scaffold, including the following:

Single scaffold is common in brick-laying work and is composed of one single frame of standard scaffolding arranged in a shape that looks like the letter ‘L’ upside-down. It has supporting beams that are placed into holes drilled into the wall and walking boards across the top, giving easy access to adjoining structures.

Double scaffold is used when it isn’t possible to drill holes into the wall to support the beams, for example, when the wall is made of stone. The frame itself holds the supporting beams, known as ‘putlogs’. It is shaped like an ‘H’ and is the most common type of scaffolding.

Suspended scaffolding is built onto the roof of the building and has a suspended working platform hung with ropes or chains, the height of which can be adjusted accordingly. This type of scaffolding is normally used for painting façades and repairing external walls and chimneys.

Trestle scaffold is used for indoor decoration or repairs. Its structure consists of a single frame built on ladders or movable tripods and it is ideal for heights of up to 5m.

Steel scaffolding is quickly gaining popularity in the construction industry due to it being the safest type of scaffolding for workers. It is similar to double scaffold but is reinforced with steel fixings, making it stronger and more stable.

Cantilever scaffold is often used if the scaffolding cannot be placed on the ground underneath the building, such as if a public footpath needs to be left free from obstacles. It is built by inserting needles through the walls of the connecting building to add stability.

Patented or ‘ready-made’ scaffolding is bought as a pre-made frame with boards already fitted and brackets placed at the necessary height for the work.

Do I Need a Permit for Scaffolding? 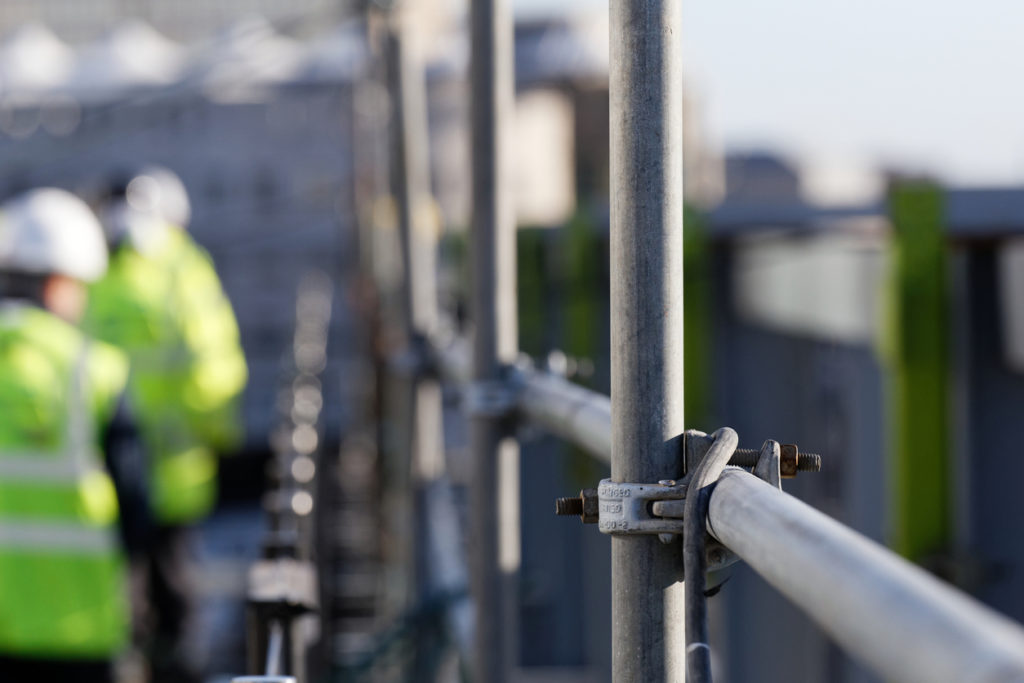 In the UK, a permit is required to erect scaffolding. This covers all the safety regulations and reduces risks to the health and safety of workers.

The contractor or scaffolding company should obtain a permit before starting work, so make sure to check with them.

In addition, if any part of the scaffolding infringes on public land, you will need a permit from the local council. Prices vary depending on the county and range from £10 to £50 per week.

How to Erect Scaffolding

Scaffolding erection varies per type of scaffold but follows the same basic pattern. The scaffolding must be erected on flat, stable ground and sometimes requires the laying of a scaffold base. From this foundation, the frames are added. Normally, frames are built lying flat on the ground before being connected to the base.

How to Remove Scaffolding

It is important that scaffolders wear protective headgear and ideally work in pairs to ensure maximum safety and protection.

Get Prices on Scaffolding Near You

We’ve done our best to give you a good idea of what you can expect to pay for scaffolding.

We work with all the best scaffolding suppliers ready to price your job. Get free, no-obligation quotes in your local area and compare prices using the form below.