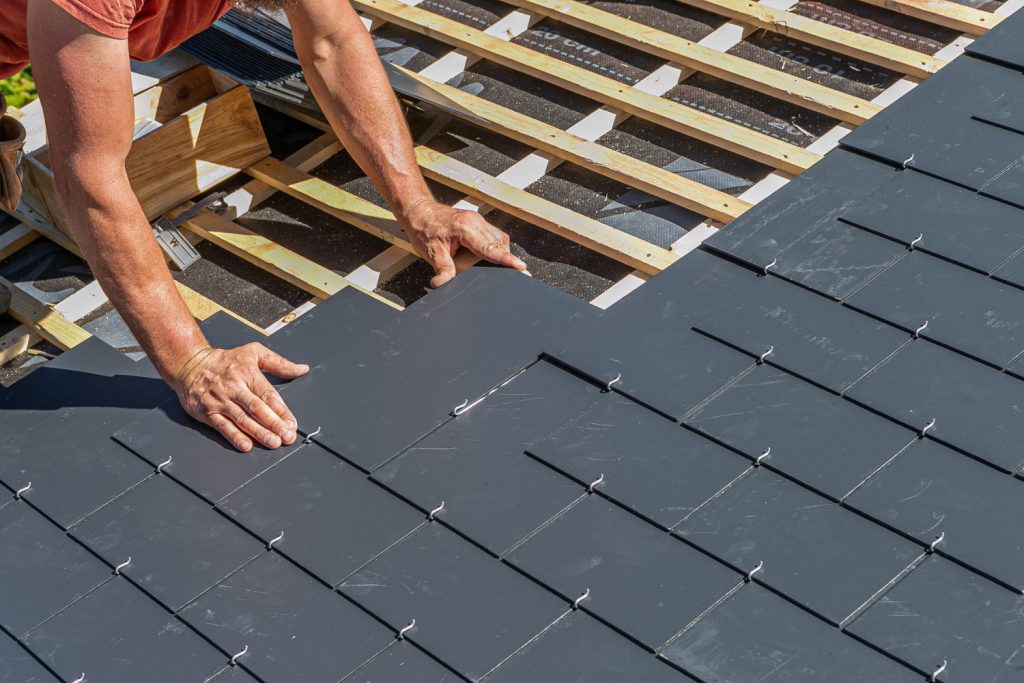 A slate roof is an excellent choice for a new roof due to its durability, visual aesthetics and low effort to maintain it over its lifespan.

Real slate can add bundles of character to your property. But as with all materials of high-quality, slate can be on the pricier side. It’s worth balancing that against its long lifespan, which means you can expect it to pay for itself in due course.

This article will cover the sorts of costs you can expect to pay for a flat roof as well as other factors which may affect the price of flat roofs.

We worked with a professional quantity surveyor to price up a slate roof.

These originate in quarries across Europe, Africa, Asia and America. Different quarries have their own stone type, leading to various colours and shapes.

Spanish slate is typically sourced in northwestern Spain. These regions contain quarries with some of the best slates in the world.

Spanish slate density is larger than other roofing types, which helps regulate property temperatures. It is a more expensive slate but slightly cheaper than Welsh slate.

Spanish slate is one of the most well-known and most used slates on the market.

North Wales has a history of producing high-quality slate. Because of this, it is one of the most expensive slates, but has fantastic visual appear. Local quarries have been considered for UNESCO status.

Brazil slate is also widely used across the world. Their slate is created using mudstone and is cheaper than other types of natural slate. However, it still contains durable qualities similar to other slates.

Man-made slates are becoming more popular because they are generally cheaper than natural slate. They are also more eco-friendly as materials don’t need to be extracted from natural habitats. Almost all man-made slate is made from fibre cement.

Each type of slate comes with their own little benefits so suit different requirements. Here is a summary of what the main advantages and disadvantages are when it comes to slate as a general solution.

Slate can last decades and even longer. Natural slate is even more durable than their artificial counterpart as well as fireproof.

Since they absorb little water and can withstand various extreme elements, future repair costs can be kept low. Occasional maintenance may be needed, but for the most part, it can be left alone unless major damage occurs.

Even if work is required, this typically just involves removing a damaged slate, cleaned and relaid or replaced depending on how much damage has been done to the slate.

Slate can add an amazing aesthetic to your home. With various colours and shapes available, there is something for every taste. The most popular colours tend to be various shades of blue and grey.

Both man-made and natural slate is recyclable and therefore, eco-friendly roofing choices.

Natural slate is even better because it lasts longer and doesn’t involve any chemicals during its extraction or worked on.

Get Prices On Slate Roofing Near You

We’ve done our best to give you a good idea of what you can expect to pay for a slate roof.

We work with all the best slate roofers ready to price your job. Get free, no-obligation quotes in your local area and compare prices using the form below.